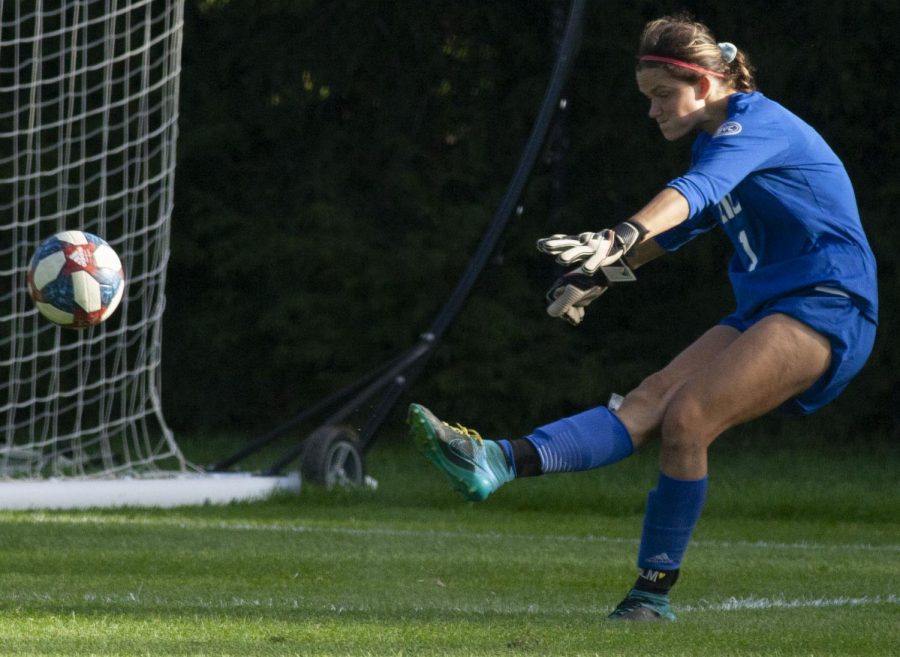 Eastern goalkeeper Faith Davies kicks the ball downfield in a match against Southern Illinois-Edwardsville on Oct. 19 at Lakeside Field. Davies had 4 saves in the match, which Eastern lost 2-0.

The Eastern women’s soccer team’s season came to an end last Friday when the Panthers lost 1-0 against Tennessee Tech in the opening match of the OVC Tournament. They now head into the offseason looking to continue growing and developing for next season.

With the end of every season comes certain players graduate and creating roles that need filled by the rest of the team next year. The downtime before next year gives coaches and players a chance to figure out who will be stepping into those bigger roles, said head coach Jake Plant.

“We will miss our seniors, we always do every year,” Plant said. “The challenge every year is for someone to step up and fill that void, and the kids we have here are more than ready for a big challenge.”

While the team is required to wait until Monday to train again, Plant said the Panthers are excited to begin the off-season work.

“We will be back out there enjoying what we do on Monday,” Plant said. “Soccer is what we do, we love it.”

Eastern fielded a host of young talent this season, with a roster that featured eight first-year players and eight sophomores. That totals over half of the team’s roster. With many players leaving, Plant said the focus is on the younger players to begin entering bigger roles and maximizing their potential.

“Development in general is a cultural identity of ours for all aspects on and off the field” he said. “We will always be pushing to improve our cultural and playing identities.”

The juniors enter their final year next season ready to take on the challenge of leading the team forward while the younger players continue building their skillset.

The Panthers ended this season with a 4-11-2 record overall, 2-5-1 overall on the conference. Eastern was able to play well enough to ensure a spot in the OVC tournament before being eliminated in the first round.

“Three post season appearances out of the last four season is a great accomplishment for this group,” Plant said. “They are up against a lot, and they show up every day ready to work. I’m really proud to coach this team.”

The off-season work begins soon. With Eastern showing a lot of promise this year, the Panthers be looking to use this off-season to gear up for the 2022 season.