Friends, teammates of Aguilar say he was selfless, caring 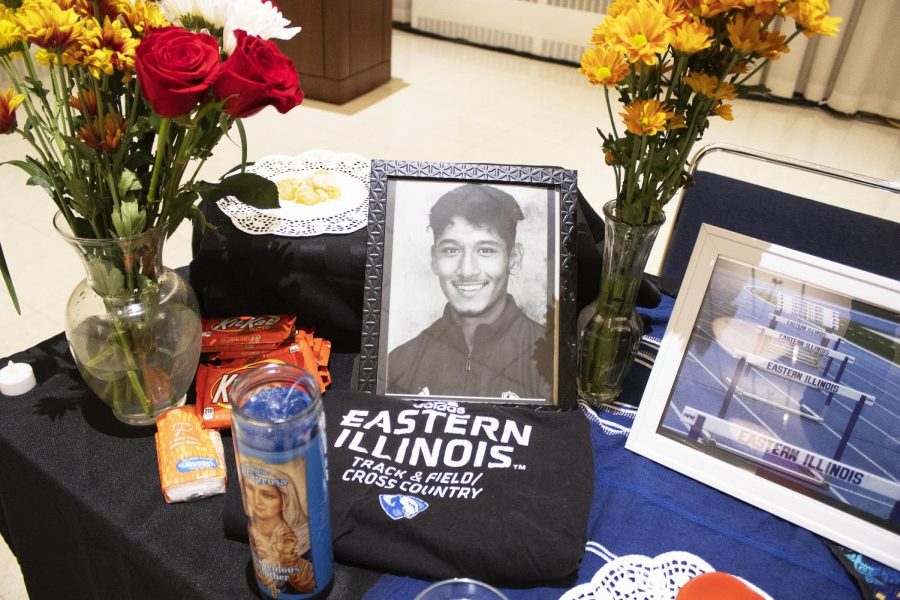 Friends and teammates of Jason Aguilar, a sophomore accounting major and track athlete who died Saturday, shared what kind of person Aguilar was, saying he was a caring and fun person.

Aguilar ran competed in sprints and hurdles and was in his second year with the Eastern men’s track and field team at the time of his death. Several of his teammates have shared on Twitter what he was like on the team.

Former teammate Anthony Bello said he reminisced on his last year on the team, which was Aguilar’s first.

“Couldn’t be more grateful to have the opportunity to be teammates with you my last year,” Bello tweeted. “I’ll never forget our first training together at the hill, knew your energy was different from the jump. You’ll be missed dearly bro.”

A former competitor, Will Horvath, shared what he was like growing up.

“Grew up running against Jason, he always made an effort to catch up and chat at meets,” Horvath tweeted. “He spread positivity to those around him and made this world a better place.”

Riley Baker, a junior kinesiology education major, said it was hard to verbalize how the track team is feeling.

“It’s hard to put into words the emotions my teammates and I are feeling right now. Jason was an exceptional person, teammate, and friend,” Baker tweeted. “The world lost a great person.”

One friend, junior sport management major and track athlete Jalen Echols, said Aguilar was like family to him.

“Jason was the most high-spirited person you would ever meet. I only knew him for a year and he felt like my little brother I’ve known all my life. He always checked up on everybody and made sure they were good and just always had that energy to turn your mood around. We lived next door to each other last year, so I took care of him when he needed my help and I always tried to be there for him,” Echols said. “He was a dog on the track and he just had that go get it attitude and it pushed a lot of people around him. He was really the most kindhearted person I ever met and was proud to call family.”

Echols said he and the other older members of the team felt and acted like older brothers to Aguilar. One of the ways they did that was by keeping him fed.

“He also loved hanging out with all of us older guys, like we took care of him and made him feel at home and made sure he was fed cause Jason was the type to eat. It was so funny how much food he used have with him but that was just him,” Echols said. “We always had good basketball games with all the guys where it was competitive but at the end of the day it was all love between us. He literally cared about everybody.”

Echols said he will remember “all the laughs and smiles (they) shared no matter where (they) were, (whether) it’d be practice, playing basketball or him just coming over to the house to chill.”

“He was my brother and will always be my brother.”

“We was all just watching college football this Saturday morning/afternoon kicking it, laughing, enjoying ourselves. He even participated in the one chip hot spicy challenge trend going around. We was all just happy enjoying our Saturday with the bro. I just had a Snapchat memory pop up on my app (from a year ago); we were all at track practice and I put the camera up and zoomed in behind me, I never really noticed it until now but he used to shadow me in practice lol. Like I’m starting to think about it, he used to try and do everything I did because I was a champion however he always put his twist on it. We used to race and talk a lot of stuff because I used to say how I’m getting older and I don’t have as much energy like him anymore.”

Teammate Rylei Jackson, a junior biological sciences major, said Aguilar was “just overall a guy that wanted the best for everyone around him. He was eager to get after it at practice and at meets was excited for his teammate’s performances as well as his own.

Director of Track and Field Keith Roberts said Aguilar was a good teammate.

“He was a hard worker, a good person, a good teammate. Always worried about putting other people (first), making them happy, making them enjoy the sport so I don’t even know how to describe it (he was) just a great, great teammate,” Roberts said.