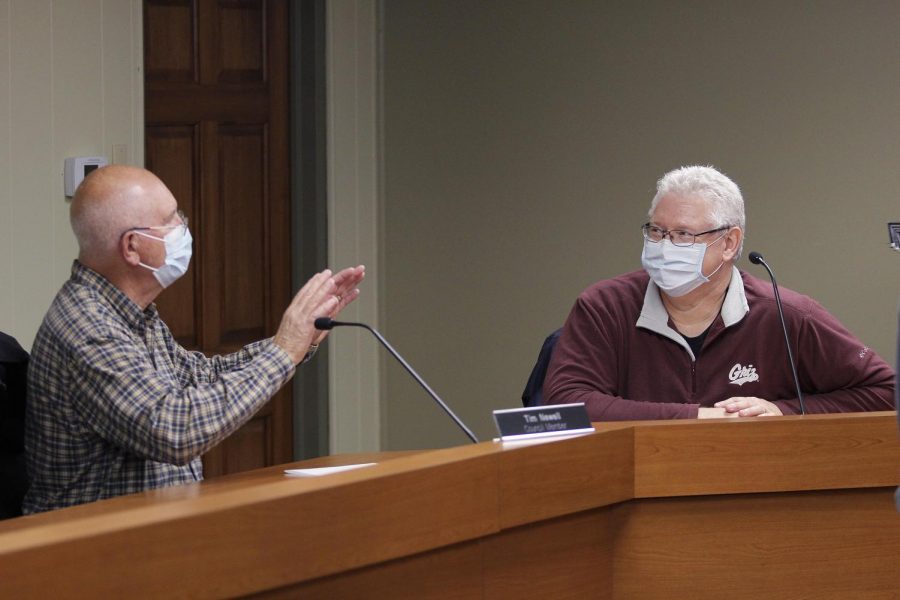 Charleston City Council Members Tim Newell and Jeff Lahr converse at the end of the Nov. 2 City Council meeting. During the meeting, the council voted on awarding a bid to R&R Services, Inc. from Argenta, Ill., to perform landscape waste tub grinding for the city. The total cost is $45,000 and the funds for the project have already been counted for in Charleston’s FY22 budget.

Charleston City Council approved a bid for a company to provide landscape waste tub grinding for the city.

“Tub grinding” is a process where vegetative waste, especially wood, is thrown into a tub-shaped opening on the top of a machine and ground up into mulch.

In Charleston, residents can have the mulch for free.

Mayor Brandon Combs, who is also an instructor of biological sciences at Eastern, said that the service is used heavily.

“A lot of municipalities charged for that kind of stuff, but we do it free for the community,” Combs said.

People use the mulch to help deter weeds from growing in their gardens. Since it’s just vegetative waste without any synthetic materials, it shouldn’t hurt the plants that people are growing on purpose.

The project was awarded to the lowest bidder, R&R Services, Inc. from Argenta, IL, which made an offer of $45,000.

City council also approved an agreement between the city and Eastern to add a segment of sidewalk adjacent to the police station and across from the Martin Luther King Jr. University Union Bookstore.

The full expense for the project will be handled by the city, which has entered into a contract with Eastern that prevents either party from blaming the other for any damages during construction.

This new sidewalk segment would connect preexisting sidewalks so that people will not have to cross the street or cut through the grass when walking on 7th St.

The purchase will be made from Durbin, a company located in St. Louis which sells and maintains SCADA systems, including the system that was installed at the treatment plant in 2013, according to Combs.

“It’s the computer system that runs everything, keeps all the data, lets us know if there’s something wrong somewhere or you know, something that burst. I mean, it tells us so much information, I can’t even begin to understand what all that computer does,” Combs said. “And it’s due for some maintenance and an upgrade to make sure- we want to make sure we have a state-of-the-art water treatment facility, so we want to make sure that it stays that way and, you know, works at the best of its ability.”

City council approved an agreement with Eastern to allow the city to inspect and operate Eastern’s water tower.

The agreement will allow the city to experiment with distribution systems while the water tower is isolated from Eastern’s system.

The agreement will last for six months, and the city will operate the tower and observe results for the entire time.

The council also approved a continuation of the local state of emergency which allows the city to expedite decisions related to the COVID-19 pandemic.

All items on the agenda were approved unanimously. There were no public comments.