The history of Charleston’s schoolhouse, Greenwood 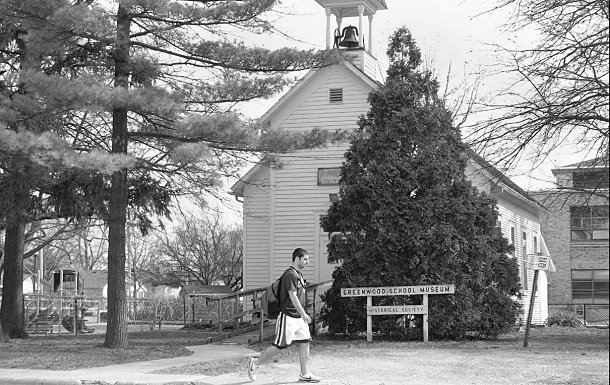 If the 48 stars on the American flag don’t illustrate the age of the Greenwood School in Charleston, Illinois, then maybe the decrepit bookshelves or the toys at the front of the room will.

The one-room schoolhouse, which was originally located in Ashmore, began holding classes in 1895, the same year Eastern was founded as the Eastern Illinois State Normal School. It’s now located at 800 Hayes Ave. near Buzzard Hall and the Doudna Fine Arts Center.

A quick lap around the interior of the classroom shows symmetrical rows of desks and bookshelves crammed with centuries-old artifacts of knowledge, some of which may be so old that the information inside has since been disproven.

The school held classes from 1895 to 1948, according to an Eastern site detailing its history. The article cites Joe Fender, a former student and Greenwood scholar, as estimating the construction date to be from 1860-61.

This ordinance made it so that children in rural areas were able to receive education since one section of each township would contain a public school.

The Greenwood School on Eastern’s campus isn’t the first after a proposition to construct a new one in 1895 passed after voters defeated it the previous two years, according to the article.

“This school meant a lot to the Coles County community, because the location provided the children in the area with an education, and served as a contact zone for social activities and other local events, such as town meetings,” it reads. “However, in 1895 the proposition passed with a vote of twenty to four.”

The school was a place of education for first- through eighth-graders, and younger students benefitted from the presence of the older students, according to the article.

“According to former Greenwood students, they enjoyed the education they received at this school,” it reads. “The students loved that all of the grades were combined into one room because they listened and practiced the lessons the teacher gave to the older children, and the older students helped them with their homework.”

The article also states that the older students could also act as a sort of teacher to the lower-grade students.

“One side of the spectrum in one room school education deals with the fact that students received special attention from the teacher to understand their own grade level lessons, but they also received the opportunity to gain more knowledge from the older students.”

Since the Greenwood School found its way to Eastern’s campus in 1975 by way of the Coles County Historical Society and a helicopter, according to the Mattoon Chamber of Commerce, it has held many programs, including a fifth grade spelling bee in 1981, a 1993 Christmas program and the Greenwood School President’s Day program in 2005, where, according to the school’s programs page, Charleston third-graders spent a day attending the one-room schoolhouse and following all the rules that students in the first half of the 20th century would’ve had to follow.

1986 saw a program called “A Child’s World: Tots, Toys and Teens, 1820-1980,” where “Over 200 items used by children during the past 165 years explore the changing role of children and adolescents in American society since 1820,” according to an Eastern release about the event.

A 1988 release from Eastern about former history professor Duane Elbert called “EIU history professor says history is more than textbook material” quotes the former Greenwood chief curator and exhibit preparer on his definition of history, which can also be used to observe a museum like the Greenwood School.

“History is not just what is contained in a textbook,” Elbert said. “It is looking at how people lived in the past- seeing their homes and the landscapes around them…It is understanding, for example why particular artifacts were used,” Elbert said.