Greeks and Treats brings the community, Greek life members together 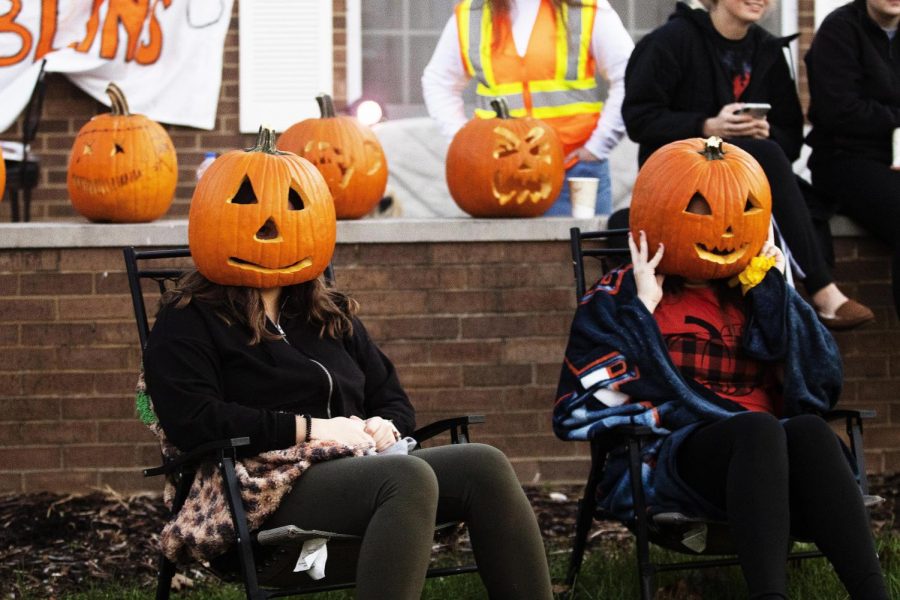 Rianna Rothermel, a sophomore early childhood education major, and Caleigh Miller, a junior sports management major, wear carved out pumpkins in the spirit of Halloween during the Greeks and Treats event Sunday night.

Hundreds of participants of all ages walked around Greek Court during the chilly Sunday night, getting candy from all the different Greek organizations at the “Greeks and Treats” event.

Dressed as witches, ghosts, clowns and more, participants also got to play games some of the organizations set up and enjoy refreshments such as apple cider and rice krispy treats.

Greeks and Treats is an event hosted by all the fraternities and sororities under Interfraternity Council, Panhellenic Council and National Pan-Hellenic Council. Drueke said this event was a good opportunity for the community to get to know Greek organizations.

“It gives them an opportunity to see what Greek life really is about,” Drueke said. “[Greek life is] about giving back and about being there for people and building on each other’s success and just helping out one another.”

Greeks and Treats was not hosted last year due to COVID-19, so Drueke said he was glad that they were able to host it this year.

“After COVID, all of us were really excited to have an event like this or just have something kind of start up and get going, because now everything’s slowly back to normal,” Drueke said. “I think it was a pretty good turnout in general. It seems like all the fraternity houses and sorority houses out here are having a good time, and there’s a ton of people from the community that came out, so in my eyes this is a success right now.”

Drueke said that hopefully this event “will lead to better things here in the future with the community and involvement.”

Many members of Greek life said that they enjoyed seeing the community come together, one being Raiven Jones, a senior biochemistry major.

Jones is the secretary of Delta Sigma Theta Sorority Incorporated. She said this was her first time participating in Greeks and Treats.

“It feels amazing. I’m very excited. I was so happy to see it,” Jones said. “I was actually back in our sorority patio, but I noticed that nobody was coming to the back of Greek Court, so I came to the Egg where I saw everybody else and just kind of joined the party. Everybody was very welcoming to wherever chapter house I could sit at the patio and give out candy.”

Jones said that it was “mind blowing” seeing everybody from Greek life and the community come together to celebrate.

She said that this was the second time she had attended the event, with the first time being two years ago.

“This is one of our favorite events to come to,” Phillips said. “The kids love it. We love that the college kids dress up and participate. Everybody’s fun and the roads are closed down, so it’s safe. We love coming here.”

Ambrie Zanton, a Charleston resident, also attended the event. She went to Greeks and Treats to trick-or-treat with her family and her friend.

Zanton said she heard about the event because her mom works at Eastern, and that she thought it was “pretty fun.” She said it was cool seeing college students interacting with the community.

“I kind of just moved here this summer, so my old town didn’t do anything this, really,” Zanton said. “I think it’s cool how everyone, all the sororities and stuff, are here.”