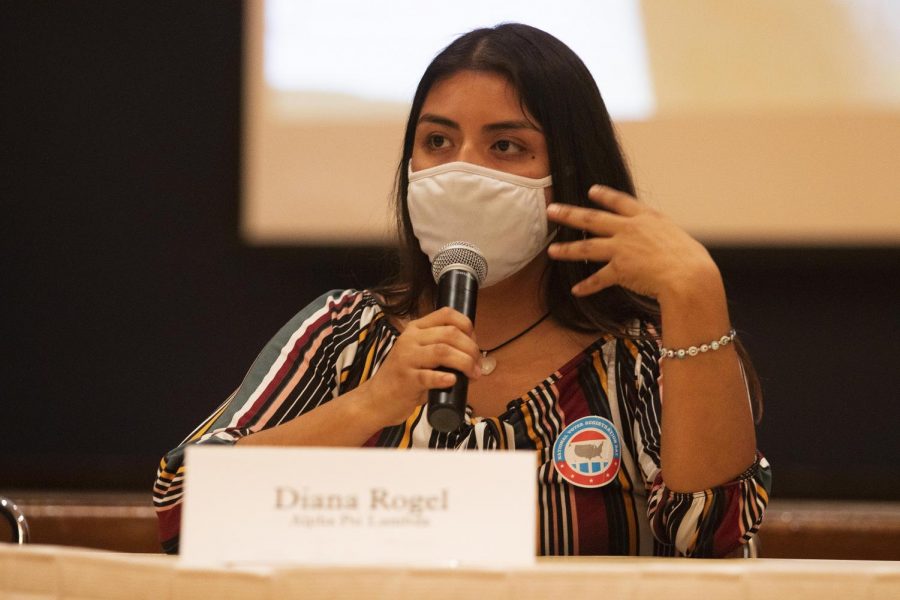 “Who’s Protecting Us,” a panel about criminal justice and police brutality, took place in the Grand Ballroom of the MLK Jr. Union Thursday evening.

The event was a collaboration between Eastern’s Criminal Justice Club and Alpha Phi Alpha Fraternity, Incorporated.

Before the discussion began, a screening of “Policing the Police,” a 2020 PBS Frontline film that features Jelani Cobb following police in Newark and includes interviews with people like Newark’s mayor, Ras Baraka and James Stewart, Jr., the president of the New Jersey Fraternal Order of Police Lodge #12, “to examine whether reform can work, and how police departments can be held accountable,” according to the film’s description on PBS’s website.

Jordan Holmes, a senior criminology major and the vice president of the Criminal Justice Club, said he first saw the film in Caitlin Lynch’s class and felt it was important to play it before the discussion.

“When I first saw it, I felt like the first few minutes of the video with those two officers who were violating that individual’s civil rights, you know I felt like disgusted because that’s not how you’re supposed to police, you’re just not going to stop anybody,” Holmes said. “You got to have a reason on why, you got to have probable cause or why. And it also gives the point of view that some people don’t see, it gives a point of view from behind the police, because all we see is probably what the news provides us.”

The questions the panel members answered were submitted through Instagram. The panelists were asked about their reactions to seeing the video of George Floyd’s death, “how can different races come together and help in the fight against police brutality,” and “how can we build a relationship with our local police,” among others.

Boyd-Johnson said he thinks that having a space for discussion and face-to-face interaction provides for an environment to engage with each other without the hostility that can be found online.

“I feel like when we create a safe space for people to talk in person, it breaks down the hostility,” Boyd-Johnson said. “A lot of people are internet warriors, and you can get people on the internet, the emotions get so built up, because sometimes you don’t understand really what that person is saying.”

During the panel, Boyd-Johnson said that after George Floyd’s death he reached out to the Charleston Police Department and the University Police Department to ask, “how can we get into a room together so we can talk to each other?” Although CPD was not in attendance, he said he hopes that they hear about the discussion.

“But what I’m striving towards is with this event, I hope CPD hears about it, that this was a wonderful place to be and I want you to come, and there’s nothing to fear, we’re a community and we should be together,” Boyd-Johnson said afterward.

Boyd-Johnson said that Floyd’s death became a turning point in the discussion on police reform because, in his words, “You could not miss it.” He said it was important to use such an event as an opportunity to grow.

“This has been occurring,” Boyd-Johnson said. “However, when you see something like that, I feel like this is an unfortunate situation, but how do we become better? That’s the moment where I would say an old advisor told me it’s a teachable moment. Unfortunately, the man’s life is lost, but we need to make some meaning of his death and make some change.”

As a criminology major, Holmes said his class with Lynch and the film were learning experiences for his future.

“And for me as a police officer, she tells me that I need to know these civil rights like on the back of my hand… so I’ll make sure that don’t violate anybody’s rights,” Holmes said. “And also just seeing how like the bad police officers, the quote unquote ‘bad apples,’ shows me not how to act.”