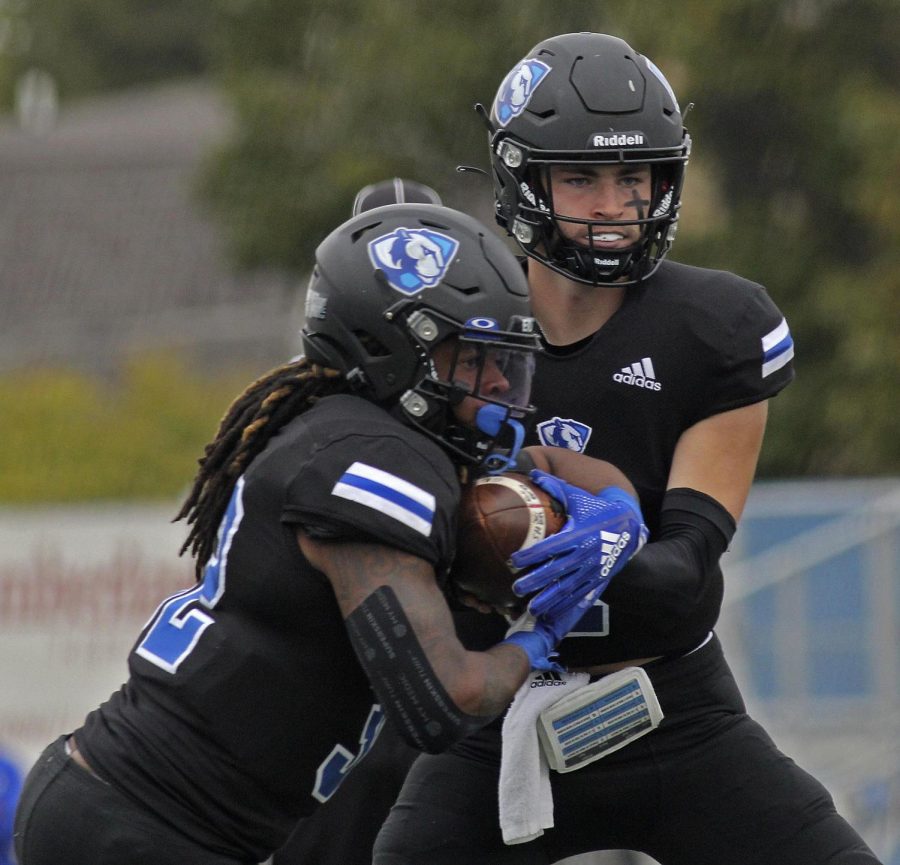 Week 8 of Play for the OVC was nothing short of exciting as one team completed a shutout while others made program history with their offensive game as they try to move up in the rankings before time runs out.

The action kicked off with Austin Peay and Murray State going head-to-head at Roy Stewart Stadium Saturday afternoon. The Governors who are fourth in the OVC, improved to 1-1 in league standings after beating the Racers 47-6.

The Governors put up one of the most dominating rushing performances in recent program history with running back Ahmaad Tanner leading the way with 148 yards and three touchdowns. Running back Brian Snead added another 132 yards and two touchdowns to the performance.

With the combined effort, the Governors were able to seal their largest margin of victory in the series since a 49-0 shutout in 1966.

The Governors defense also contributed greatly to the win. They forced six turnovers which held the Racers’ offense to 289 yards, making it the fourth time this season that the Governors held an opponent to fewer than 300 offensive yards.

The Racers were held to just one second-quarter touchdown. Quarterback DJ Williams passed for 140 yards and rushed for 75. The Racers managed to get into Governors’ territory only four times in the game.

Week 8 continued with Tennessee State taking on Eastern at O’Brien Field for Eastern’s 103rd Homecoming Game. The Tigers walked away from O’Brien Field Saturday with their first shutout win since 2017 after beating the Panthers 28-0.

The win for the Tigers not only improved their league standings to 2-1 and their overall record to 4-3 but it also extended their winning streak to three games.

The Tigers defense forced nine punts, three interceptions, and one fumble recovery. Their offensive performance allowed them to finish with 308 yards split between 147 rushing and 161 passing.

Quarterback Geremy Hickbottom finished with 161 yards and three touchdowns, two of those being rushing.

Running back Devon Starling led the way with 122 yards on 25 carries with one touchdown. Rookie wide receiver Zaire Thornton had 76 yards on four catches with his first collegiate touchdown.

The Panthers, who are sixth in the OVC with a conference record of 1-2 and an overall record of 1-7, finished last Saturday’s content with 187 total offensive yards. Quarterback Otto Kuhns was 10-of-25, passing for 70 yards with 3 interceptions.

Tennessee-Martin, who is tied with East Tennessee State for thirteenth place in the FCS top 25, currently leads the OVC with a 2-0 record and a 6-1 record overall. With that being said, the Skyhawks extended their winning streak to six games last Saturday after knocking off Southeast Missouri 38-30.

Senior running back Peyton Logan was the playmaker of the game for the Skyhawks. Logan not only achieved 2,000 rushing yards for his career but his 75-yard touchdown in the fourth quarter put the Skyhawks on top.

Skyhawk quarterback Keon Howard led the offense to 457 yards of total offense on the day. Howard completed 17-of-25 passes while passing for 221 yards and two touchdowns.

Defensively, the Skyhawks had standout performers. Senior safety Deven Sims led the team with eight tackles with Takeem Young and JaQuez Akins following closely behind with six tackles each.

At one point during the contest, the Redhawks trailed 21 points. However, they were able to score ten points in the final minutes of the third quarter, The deficit was down to single digits in the opening minutes of the fourth quarter.

However, the 75-yard touchdown from the Skyhawks pushed the lead to 15 and the Redhawks’ final strike in the fourth quarter would not be enough as time ran out on their comeback attempt.

The weekend was closed out with a 56-13 Tennessee Tech win over Virginia-Lynchburg. The Golden Eagles are 1-2 in league standings with an overall record of 3-5.

The Golden Eagles managed to put together 404 yards of total offense with 299 of those being rushing. The running game was led by freshman running back David Gist who recorded 127 yards. Jordan Brown added to the performance for a career-high of 110 yards.

Starting quarterback Willie Miller was 4-of-6, passing for 90 yards with one touchdown and one interception. Freshman quarterback Lem Wash saw his first action, completing one of his four passes.

Defensively, the Golden Eagles held the Dragons to 156 yards of offense. Jake Huner and Devin Squires both had five tackles a piece with Xavier Washington following close behind with four.

Six of the OVC’s seven teams will be back in action competing in Week 9 of Play this Saturday.