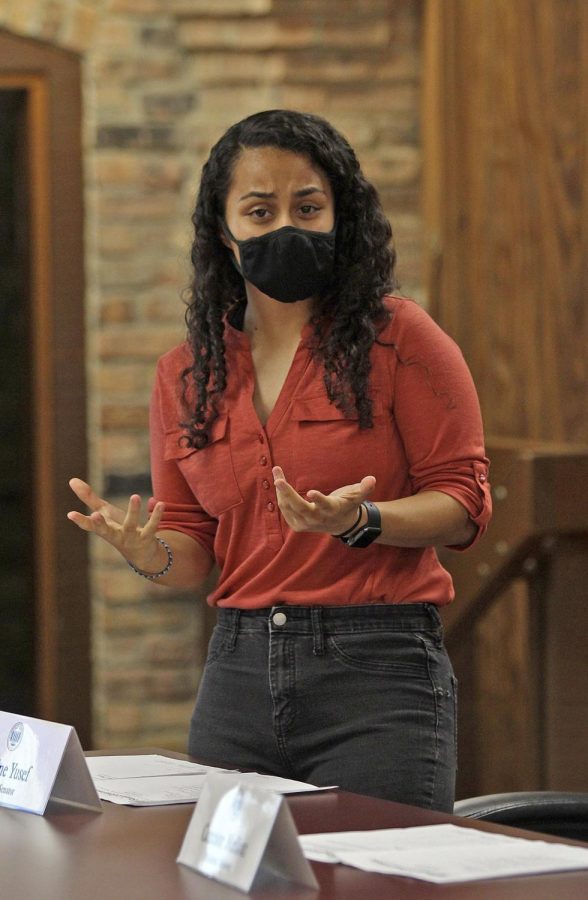 Student Senator Jasmine Yusef, a junior English and philosophy major, explains her Committee report at the Wednesday night Student Government meeting. Yusef highlighted Star reports during her report and encouraged fellow senators to nominate one another for it.

Senator Jasmine Yusef was approved to join the Textbook Rental Advisory Committee in this week’s Student Government meeting in an updated consent agenda.

Senator Yusef said Student Body President Williams had previously asked if anyone was interested in serving on the committee, that there was a need present, and that was when Yusef had reached out to volunteer.

As for the new business, all three emergency bills in regard to the approval of new RSOs were tabled for one week due to communication errors and issues with constitution revisions.

The RSOs were for a Majorettes group, a Creative Writing Club and a Culturally Diverse Society.

There was no adviser report from Ceci Brinker currently, nor a graduate adviser report from Justin Richards, who was gone. However, it was relayed from Speaker of the Senate Alexander that he hopes everyone had a good Homecoming Week and that he will be back next week.

The Speaker of the Senate report went over requirements of office hours and absences for new senators. Senate-On-The-Go would potentially be on the Nov. 10 meeting, something done in the past as a way to show Student Government in a more public place so that students walking by can join in.

The SB President report included creating marketing for Freshman Class Council. This is an idea still in the works which will feature an intro level student government opportunity for around 10 freshmen to voice their concerns to the SB President to bring to the senate.

The SB Executive Vice President report mentioned a potential Council of Representatives that would represent parts of campus through RSO groups. SB EVP Ade said for this idea they would like to have their position lead it and have different RSO group leaders act as an advisory group to see how student lives are doing on campus and if there are any major concerns.

The SB Vice President of Academic Affairs report discussed a “Bonding with the Prez’” event Nov. 3 from 12:00 p.m. to 1 p.m. at the University Food Court where there will be games, trivia, and prizes.

The Vice President of Student Affairs report went over the RSO approval process.

Academic Affairs is working on reevaluating the student grading scale.

Alumni Relations is researching, discussing and will begin planning something for seniors for fall graduation.

Business Affairs is planning an event for students that will potentially be a monopoly game where the layout will be Eastern’s campus, and the cards will be fees and financing in relation to the university.

External Relations is working on a formal report of survey results and committee progress from last semester and working on deciding a main goal to work toward for this semester.

Internal Affairs is setting up a game night for Student Government members.

“They are encouraged to bring a friend to increase enrollment numbers of Student Government,” said Senator Yusef.

Student Affairs is working on a digital tabling series by reaching out to all RSOs to introduce themselves via videos to potentially put on the Student Government YouTube page.

University Enhancement is working on date rape drug kits, a SACIS presentation and a recycling initiative.