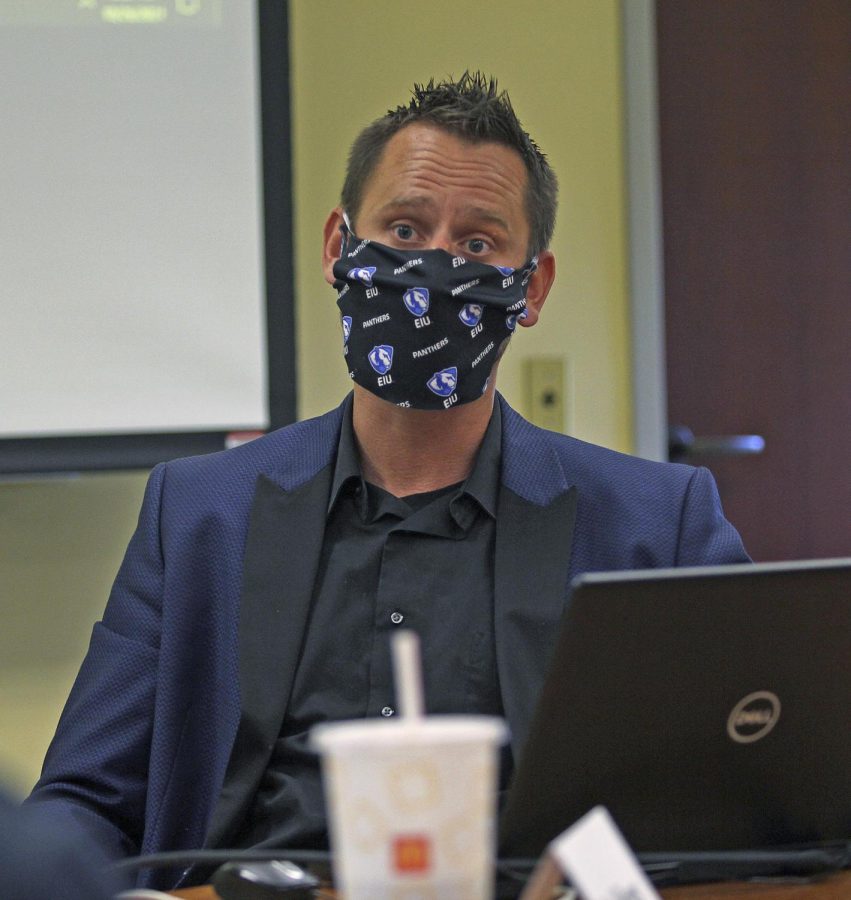 Faculty Senate’s meeting Tuesday revolved around enrollment numbers on campus and what the Senate can do to continue increasing those numbers.

Associate Vice President for Enrollment Management Josh Norman also spoke on some of the factors that played a role in the most recent enrollment cycle. Norman said that one change that impacted enrollment by making Eastern more marketable was the decision to be “test-optional” in the application process.

Like many other universities in Illinois, Eastern stopped requiring SAT or ACT scores for incoming freshmen during the COVID-19 pandemic.

While most schools were completely online, high school juniors and seniors either could not take standardized tests or were taking altered versions of the tests after having months of school online when teachers weren’t prepared for that setting.

Many colleges decided to focus on other aspects of new student applications, and some, like Eastern, may not return to requiring standardized tests in the foreseeable future.

Norman said that a challenge for recruitment has been that just under half of the students from Illinois go out of state for college.

This means that out-of-state schools recruit heavily in Illinois, competing with what Eastern has to offer.

Norman said that honors students and athletes contributed to Eastern’s efforts to retain students from year to year; athletes had an 89.9% retention rate from the 2020-21 school year to this year.

The freshman “fall to fall” retention rate is currently at 73 percent, and the enrollment office’s goal is to get it to 77 percent.

Retention rates for first-generation, Pell-eligible, low-income and underrepresented students were lower, to the point that Norman said it made him “sad.”

“Those students who are most at risk did feel that change and the particular circumstances, the mental health issues that came along with the pandemic,” Norman said. “There are just so many factors that were working against our students when it comes to persistence, and not just our new freshmen.”

Norman said that supporting current students who may be dealing with rough situations was even more important to him than recruiting new students.

A portion of Norman’s presentation covered suggestions for how faculty members could improve enrollment and retention rates.

The main suggestion was to play up Eastern’s strengths as a small school by going out of their way to connect personally with students.

“This high school student sent 50 emails to professors and faculty members across the nation at different schools talking about her interest in the chemistry of bananas and Michael (Beck) was the one to reply and then you know what, it wasn’t just her that was positively impacted,” Norman said. “She told all her friends, ‘I emailed all these universities and only the faculty member from Eastern Illinois University replied’ and it had this ripple effect.”

Norman suggested that faculty attend open houses to meet with prospective students and make sure that their information on Eastern’s website is up to date.

Faculty Senate also had their usual committee reports from the Executive Committee, Elections and Nominations, the Student and Staff Relations Committee, the Awards Committee and the Faculty Forum Committee.