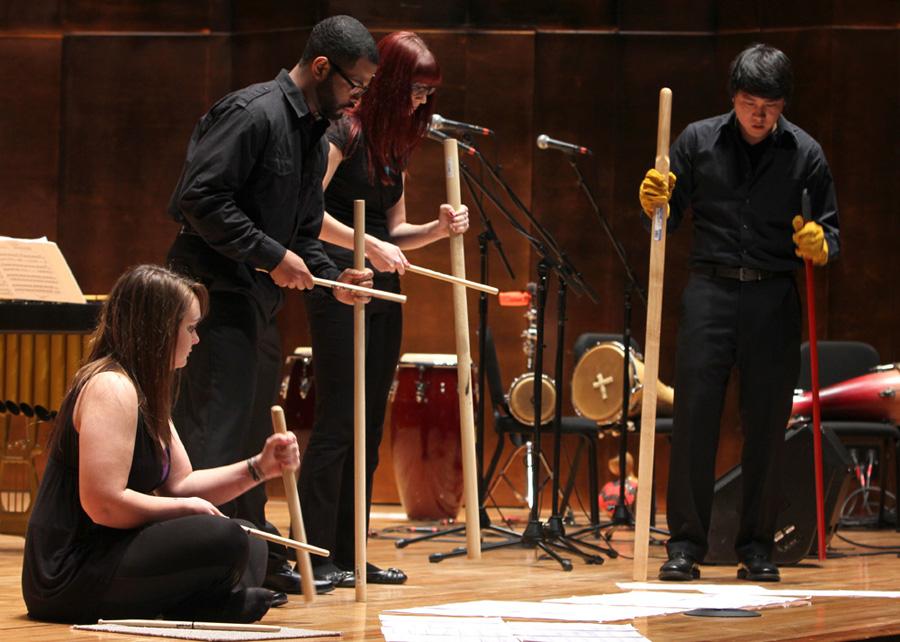 The echoing of drums will be heard throughout the Doudna Fine Arts Center Tuesday night as the Eastern Percussion Ensemble performs in the Black Box Theatre starting at 7:30 p.m.

The ensemble will be putting on a program consisting of chamber music for percussion instruments, and according to the ensemble’s director Jamie Ryan, will feature the works of a diverse group of composers.

“The EIUPE plays chamber music written in a variety of styles, and on this concert we are featuring works by composers who identify as female, Latino or non-white/non-male in general,” Ryan said. “Also, the EIUPE always performs folkloric music from the African Diaspora, and our continued focus is the study of Afro-Cuban music like rumba, bembe and batá drumming.”

The concert will open with the traditional Afro-Cuban song “Elegua,” then “Punch It, Margaret!” by Olivia Kieffer and “The Gilded Cage” by Susan Powell.

Next on the program is “Reflection Canon,” a piece consisting of four movements also written by Kieffer.

The final three pieces will be “maleza” by Javier Diaz, the traditional Afro-Cuban piece “Yemaya” and “Los Muñequitos” by Esteban Lantri.

Ryan said that selecting the music for concerts is an enjoyable part of the process, but not quite as enjoyable as the finished product itself.

“The selection of music is always special to me, since I pick most of it. But the students who perform – and the occasional playing I get to do with them on this concert – are the special things,” he said.

Ryan also said that the Percussion Ensemble, which lacks wind instruments, does not have the same concert as other ensembles when it comes to rehearsing and performing during the ongoing pandemic.

“Because percussion does not emit any aerosol when we play, our concerns are much lower than that of our peers who play wind or brass instruments or sing,” he said. “However, our performance of Afro-Cuban music does require some singing, and we do this with masks on and plenty of space in between players.”

The ensemble will also be back performing in front of a crowd after all of last year’s performances took place via live stream.

Ryan said that playing in front of people is preferred, but live stream shows are also worthwhile.

“Last year, we performed all of our concerts by live-stream, so the ensemble members and the audio and video crew were the only people in a large space,” he said. “We do prefer playing in front of people, however, it would be great if the resources (money, personnel, etc.) could be provided by the school to continue more live-stream events.”

Tickets are available online or at the box office at Doudna, with a limited number of free tickets being made available to Eastern students on Tuesday.