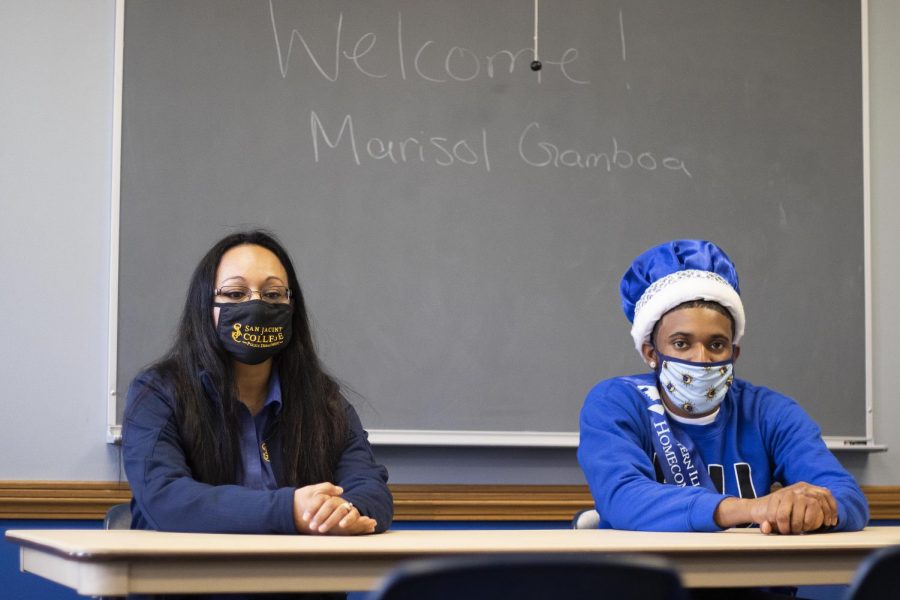 Jerimiah Boyd-Johnson, a senior political science major, presents Marisol Gamboa, a candidate for the University police, and opens the room for questions inside the Paris room of the Martin Luther King Jr. University Union.

A third candidate for campus police chief, Marisol Gamboa, told students she was interested in providing personal relationships between officers and students during an open session Friday.

She said she was interested in the position at Eastern because the role of chief seemed like a natural next step in her career, but the chief at her current department will not retire for some time.

Gamboa also spoke about her family and her children, some of whom have graduated college.

During her time at San Jacinto, Gamboa said she completed trainings and received certifications in topics like human trafficking, cultural diversity, Spanish for law enforcement and anti-bias training.

“Anywhere you go, there’s going to be diversity. The skills that I learned from that would definitely benefit me here,” Gamboa said.

Students who attended the open session told Gamboa about issues they had seen on campus with the police, like students being unwilling to report to them or having a hard time trusting officers.

Jerimiah Boyd-Johnson, a senior political science major, said that he and other students from Chicago felt nervous when officers even looked at them as they first arrived on campus, but that seeing the police off-duty as regular citizens helped them feel more secure.

“I actually saw the chief in the grocery store one day without his uniform on, and that actually felt good because it’s the humanization,” Boyd-Johnson said. “It’s that, okay this is your job, but also, you go home at night to your kids. You’re a normal person just like everyone else.”

Gamboa said that she wanted to bring in programs inspired by some at San Jacinto College which encouraged students and officers to speak to each other and form personal relationships on some level.

One of these efforts would be having officers make an effort to talk to students and get to know their names while they do building lockdowns.

Another would be to have open sessions with officers throughout the year where students could come get coffee and donuts with officers and be able to approach them in a casual setting with any questions or concerns they might have.

Gamboa also said she was interested in connecting more with criminology and criminal justice students by hosting tours of the department, as well as hiring students so they could get involved and learn from the police department before they graduate.

Kristal Munoz, a sophomore criminology major, said that something she would like to see from the department was more diversity to reflect the student body.

Gamboa said that she would not purposely hire people for their skin color or gender, but that she did want to mirror the community and would diversify the department by reaching out to more places to hire officers.

Police academies and police job fairs are two places where Gamboa said this recruitment could happen.

“It just can’t be at one location, you have to kind of spread it around in different communities everywhere. When they start applying, you have to follow certain criteria as far as that their integrity, their commitment to serve the community and how responsible are they,” Gamboa said. “Your department will start getting diversified.”