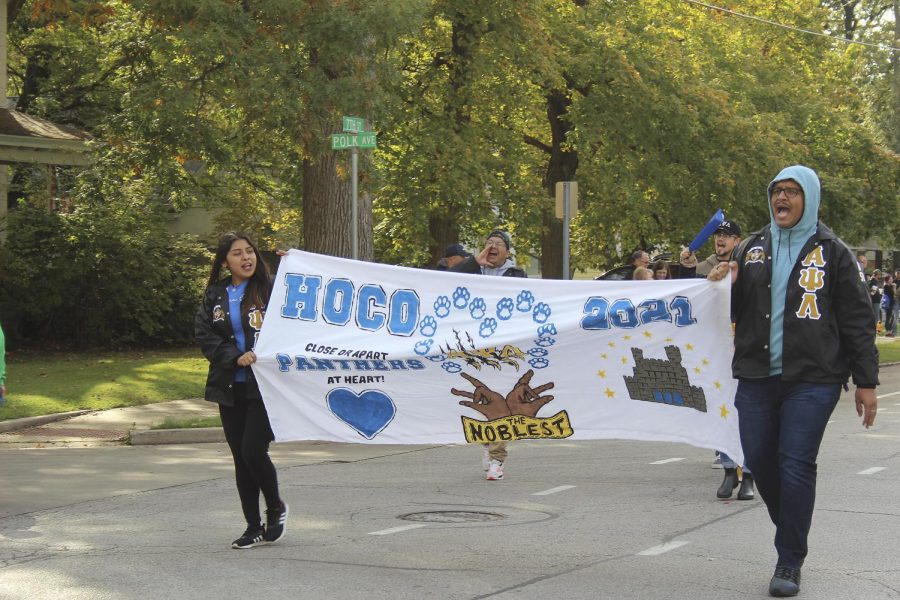 Eastern and its surrounding community took part in homecoming festivities this past weekend, including the first homecoming football game since 2019.

This year’s theme was “Close or Apart, Panthers at Heart,” celebrated “with the health and safety of the EIU and Charleston communities still at the forefront of our minds,” according to Eastern’s homecoming event page.

Saturday morning saw crowds gather along the parade route to see over an hour’s worth of floats, dancers and marching bands from both Eastern and Charleston High School, tossing candy and merchandise to those in attendance.

“We try to come every year, but unfortunately with COVID we had to miss it,” Kearney said. “The last time we were here we know it was raining really bad, but we stayed out and watched the parade in the rain.”

Kearney also talked about what she would do for homecoming when she went to Eastern, and how that’s changed now that she comes with family.

“When I was in college, we used to wake up super early and have breakfast, and then we would come out to the parade and hang out and go out to the football fields, and just being with friends was always so fun,” Kearney said. “It’s kind of more of a family affair for us now than it was back when we were in college.”

Sadie Diehl, a freshman kinesiology major, spent her Saturday morning volunteering in the Honors College tent in the Alumni Tent City outside O’Brien Stadium. She said she heard about the tailgating event from a cousin who attended Eastern.

“So my cousin went here a few years back, and she said that they have a really big tailgating event before it, so I was looking forward to that,” Diehl said.

Diehl’s first college homecoming was different from her high school experience, she said.

“It’s way more vocalized, they tell you about it more, and it’s definitely a lot bigger,” Diehl said.

David Hagler, a graduate student studying business administration, said he enjoys a lot of the aspects of homecoming and the atmosphere it creates on Eastern’s campus.

“I would say the tailgate, the football games, I would say the homecoming parade if it wasn’t so early, but you know just the parties, just enjoying like the good vibes on campus, hanging out with friends and just forgetting about classes for a weekend,” Hagler said.

The 2022 Homecoming will be Hagler’s last, but he said he could come back to visit for festivities in the future.

“Next year will be my last one,” Hagler said. “So you know, I’m just going to enjoy it while I can, and I guess I could still come back every now and then just to enjoy future homecoming games.”

The Panther football team would go on to lose 28-0 to the Tennessee State Tigers to drop their all-time homecoming record to 52-43-8.