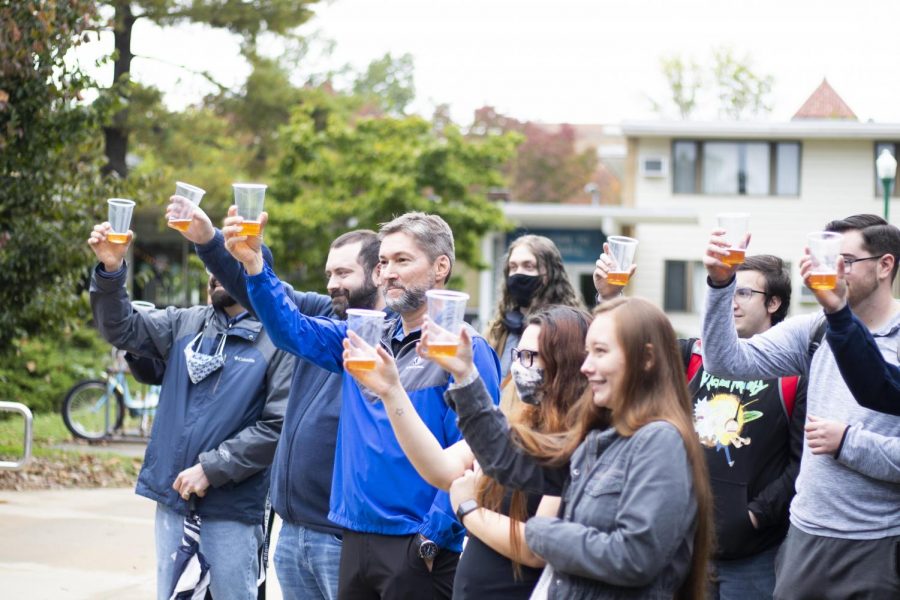 The crowd toasts to the Doug DiBianco floor dedication in front of McKinney Hall Friday afternoon.

A floor in McKinney Hall was dedicated to Doug DiBianco, founder of what would become EIU Pride, on Friday afternoon.

The dedication was celebrated with a commemorative plaque and speeches from Atlas Hennegan, vice president of EIU Pride, Vice President of Student Affairs Anne Flaherty and Tanya Willard, the coordinator for the Center for Gender and Sexual Diversity.

Hennegan, a senior majoring in philosophy and English, said that other names that were references to LGBTQ+ history were considered, but DiBianco was the one that stuck.

“We originally started just like trying to come up with names, Marsha P. Johnson was thrown around, I believe we also talked about like the Lavender Floor, and there were just a bunch of different names, maybe even the Stonewall,” Hennegan said. “But then someone in a meeting had mentioned Doug DiBianco and it just kind of clicked, and everyone was like that’s the name we need, he’s the one who started Pride, he’s the one who created a space on campus when there wasn’t one so we knew that he was the one that should be named after for the floor.”

The area is meant to serve as “an inclusive community designed to create a comfortable and supportive environment for all students of all gender and sexual identities,” according to Eastern’s housing website.

Willard also mentioned that the wishes and demands for gender-inclusive housing have been in the works for nearly a decade.

“Yesterday I was down in the Center and I was cleaning up because we’re doing a reception later today, and I found a scrapbook from 2010-2011, which is the year [DiBianco] passed away, and in that scrapbook was an editorial from a student at the time writing to the DEN about wanting gender-inclusive housing, and that was 10 years ago,” Willard said.

EIU Pride organized a protest after their name recommendation was initially rejected because naming the floor after DiBianco would break tradition and because no donation was made.

Hennegan laid out EIU Pride’s requests before the protest led them chanting from the Mellin Steps to Glassman’s office, where they were able to agree on naming the floor after DiBianco.

“So we decided that we were going to take it upon ourselves to do a protest to get this name on the floor and so we had given President Glassman a few details about exactly what we wanted, and how we wanted the name Doug DiBianco to be on a plaque and on all of the marketing for the floor,” Hennegan said.

Hennegan said that they want to see Eastern’s LGBTQIA+ community continue to advocate for their wants and needs after they graduate, including a relocation of the Center for Gender and Sexual Diversity’s office.

“I would like them to keep advocating for whatever we want,” Hennegan said. “I think one problem that we have currently is the placement of our office. It is in the lower level of Stevo, and we would like somewhere a little bit more visible.”

Students interested in living in the Doug DiBianco Community can request to live there by selecting “Gender Inclusive Housing” on their room and board contracts.