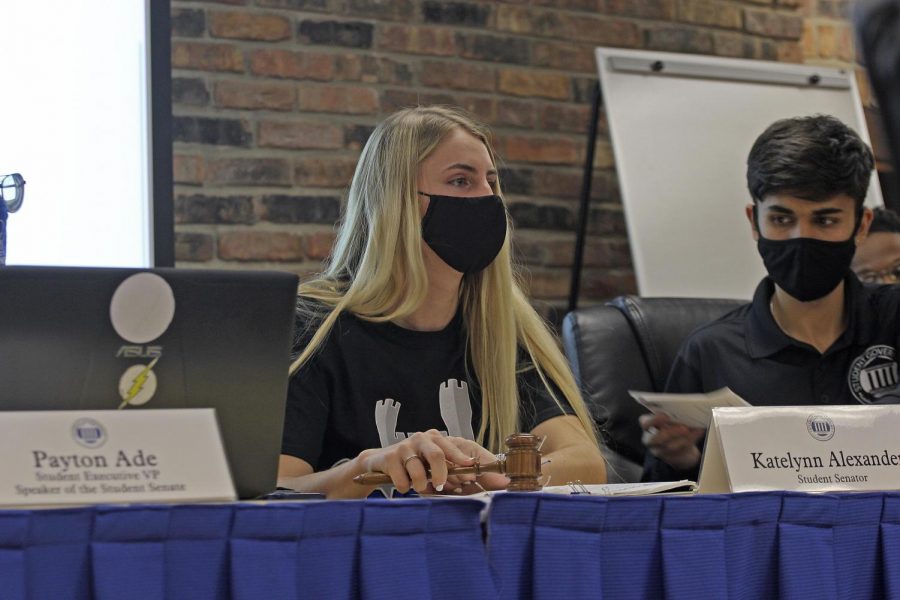 Intrem Speaker Katelynn Alexander, a senior political science major was elected into the intrem speaker position at the Oct. 20 Student Government meeting. Unlike the past two meetings, this meeting was the first to meet quorum since Sept. 26. This will be Alexander’s second semester serving in the Student Senate.

Thanks to the appointment of three new senators, Student Senate had 17 of 19 senators present, with the minimum number of senators needed to meet quorum being 15 senators.

Alexander gave a presentation which introduced who she was, her qualifications and her goals for the Student Senate.

After Alexander was vacated from the meeting room, the Student Senate had a discussion period about Senator Alexander. Senators discussed what they thought of her work ethic, character, and how well she would perform as speaker.

After deliberation, the vote was 17 yes and 1 abstain; therefore, officially electing Katelynn Alexander as Speaker of the Student Senate.

Alexander, a political science major, shared her excitement about her new appointment.

“I am very excited,” Alexander said. “I am also very motivated because I only have the position for a short time since it took so long to have quorum to be able to have the election. So, I’m excited just to get started right away.”

Alexander also described her plans now that she has the position of Speaker of the Student Senate.

“So, I talked about student outreach, and I want to get the rest of the seats filled in Student Government,” Alexander said. “So, an idea actually was brought up that I think would be really great is ‘senate on the go,’ where we have our meetings in a residence hall and it’s open to anyone to come.”

Since Alexander took over as Speaker of the Student Senate, Student Executive Vice President Payton Ade said they are happy to only have one executive position.

“It feels amazing,” Ade said. “I was in a position that I was not elected into that position. I was given that position for the fact I was one of the two execs on the Student Government Association that had been a member of the Student Senate before.”

The consent agenda also saw the appointment of:

In addition to the committee appointments, Kennedy German, Mahalet Mulugeta and Madisen Tellis were also sworn in as senators.