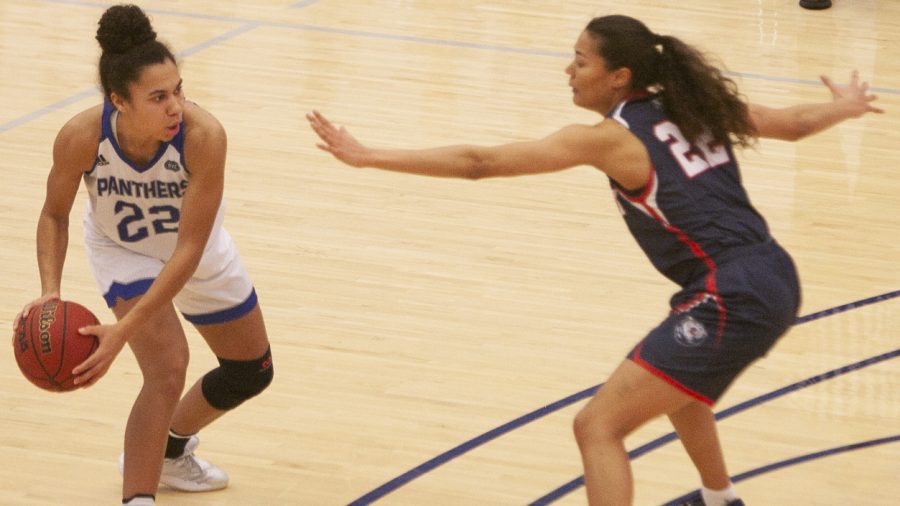 Eastern guard Lariah Washington looks to pass the ball into the paint in a game against Belmont Feb. 4 in Lantz Arena. Washington led the team with 23 points in the game, which Eastern lost 77-75.

The OVC released the 2021-22 preseason poll Tuesday, announcing the predicted order of finish for the men’s and women’s teams and the preseason All-OVC selections.

The poll is constructed by the head coaches and communication directors for each school in the conference.

Perhaps unsurprisingly, Belmont was picked to win the conference.

The Bruins were 14-3 in conference play last season, finishing just behind Tennessee-Martin in the regular season standings. Belmont beat the Skyhawks in the OVC Tournament.

Tennessee Tech is picked to finish second. The Golden Eagles were 12-8 last season in conference play, tied for fifth in the OVC.

Also 12-8 in conference last season was Murray State, which is picked to finish third this season.

After winning the OVC regular season title last season with a 17-2 conference record.

Tennessee-Martin is predicted to finish fourth in 2021-22.

This drop is due in part to the loss of forward Chelsey Perry, who was named OVC Player of the Year in each of the last two seasons. Perry was drafted 26th overall in the 2021 WNBA Draft, becoming the first OVC women’s basketball player to be drafted.

Selected to finish fifth this season is Austin Peay, which was 10-8 in conference play last season.

Eastern is predicted to move up a slot from eighth last season to seventh this season. They were 9-11 in conference play.

The All-OVC team features a pair of Eastern players. Both Abby Wahl and Lariah Washington were given the preseason honor.

The full preseason All-OVC team is as follows:

It was a Belmont sweep in the preseason poll, as the men’s team was also picked to win the OVC this season.

The Bruins were 18-2 in conference play last season, but lost in the OVC Tournament to second-place Morehead State, which is predicted to finish second once again.

Murray State is predicted to move up to third place after tying for fifth last season. They finished behind Eastern Kentucky and Jacksonville State last season, who have since left the OVC.

Southeast Missouri went 9-11 in conference play last season, but is expected to jump up to fourth place this season.

Tennessee State got the biggest jump of any team in the preseason poll. The Tigers are predicted to finish in fifth place after placing last a season ago with a 3-17 conference record, due in part to injury issues throughout the season.

Southern Illinois-Edwardsville was picked to finish seventh and Tennessee Tech slated for eighth. The two teams were separated by three points in the poll, the closest margin of two teams in the conference.

Eastern was picked to finish ninth under new head coach Marty Simmons and a roster with nine new players.

Tennessee-Martin, which was 6-14 last season in conference play, is picked to place last.

Eastern does not have any representation in the Preseason All-OVC Team. Marvin Johnson was named first team All-OVC team last season for the Panthers, but is now playing for Oklahoma.

The Preseason All-OVC team is as follows: