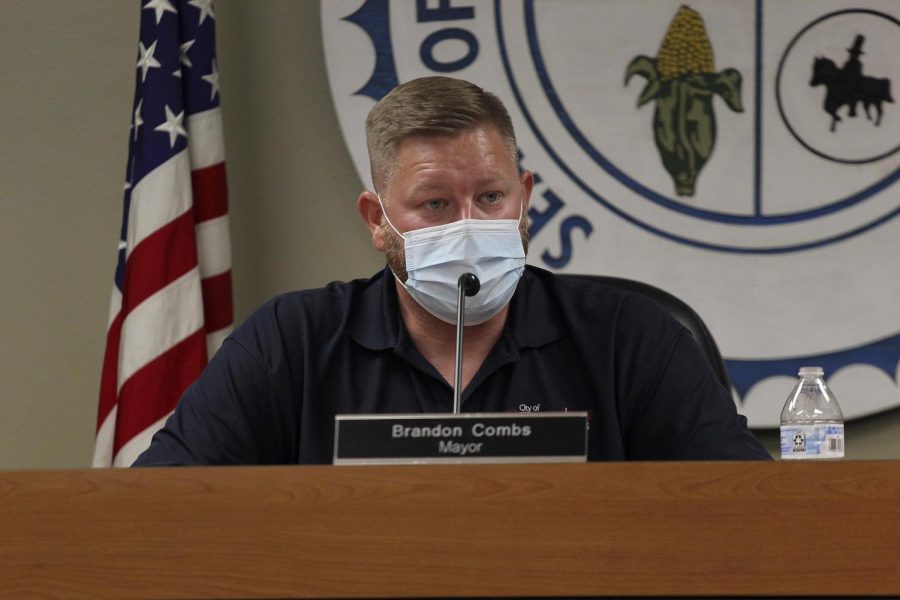 Charleston Mayor, Brandon Combs, asks if anyone from the audience wants to address the Council at the City Council meeting Oct. 19, 2021.

Mayor Brandon Combs said the project is a part of a mandate from the Environmental Protection Agency.

“It’s not just ours [wastewater plant], it’s multiple municipalities where the water runoff goes, they’re just making sure that we’re getting like an ultraviolet type sanitation process to kill the microbes,” Combs said.

The project is a part of the Environmental Protection Agency’s efforts to reduce a dead zone in the Gulf of Mexico.

According to the National Oceanic and Atmospheric Administration, dead zones are areas where there is too much nitrogen and phosphorus, causing areas in the water where there is little to no oxygen.

These areas are uninhabitable by fish and vegetation at the bottom of the gulf.

The Illinois Bureau reported that wastewater plants aren’t equipped to reduce a large amount of nutrients from the water.

Combs said the council has had the mandate on their radar for five years and the council wants to jump ahead to make sure everything is done in a timely matter.

“There is some help available, some take a lot of planning and a lot of stuff on the city side, so that’s why we need consultants to come in and help us out because we don’t have the expertise to go in and do this type of work,” Combs said.

He added that they are starting the project now because it will take several weeks to figure out what kind of system will work for the wastewater plant and some of the work has been done.

“Some of the work we’ve already done has been a lot of electrical work,” Combs said. “There’s a lot of work that goes into this and getting over to some of the bigger stages we need some other groups to come in and help us out, who are familiar with this type of stuff.”

According to The Chicago Tribune, there are dead zones popping up in areas around Illinois like in Lake Eri, Lake Michigan, and Lake Huron as well as the Illinois river that has been pushing fish away into deeper waters.

Combs said the council has chosen Donohue and Associates, Inc. and UpChurch Group, Inc. to work together on the project because both groups have expertise in the area.

They also approved of the Lincoln Log Cabin Foundation’s request of $1,500 to cover expenses they will have from the Harvest Frolic as well as the multi-use path from Sister Park to Nursery Road.