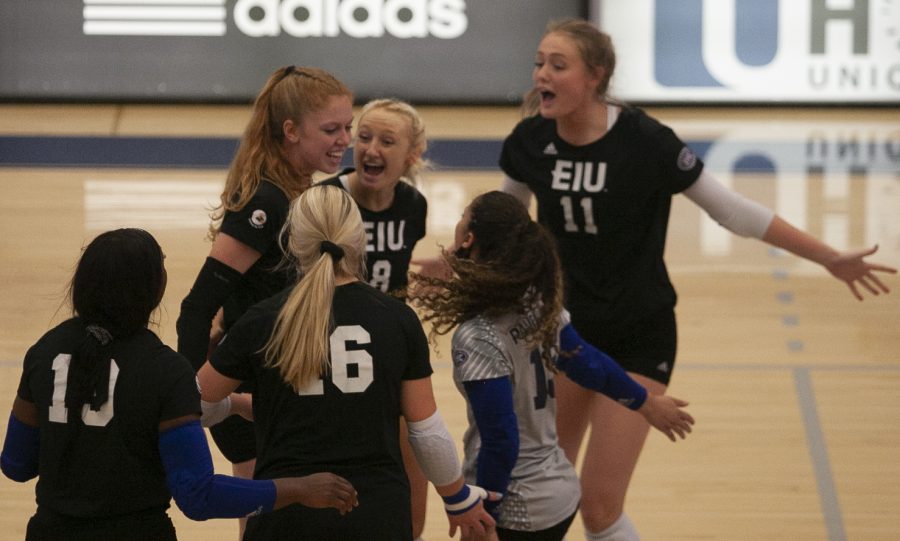 The Eastern volleyball team celebrate a kill from Emily Wilcox (left) in a match against Indiana State on Sept. 19 in Lantz Arena. The Panthers lost the match 3-1.

It is the midway point in of conference season for the volleyball teams of the OVC, with all 10 teams having played nine or 10 if their 18 conference matches.

Instead of standings, let’s take a look at the individual players leading the conference in different statistical categories.

When it comes to kills, a newcomer to the OVC has been leading the conference throughout the season.

Murray State freshman Brooke Watts’ average of 4.85 kills per set is the most in the OVC by a relatively wide margin and also ranks fifth in all of Division I this season.

She even briefly led the nation in that category earlier in the season.

Morehead State’s Olivia Lohmeier ranks second in the conference with 4.09 kills per set.

She was also named the OVC Newcomer of the Week on Monday.

Eastern middle blockers Kameryn Sillmon and Emily Wilcox rank third and fifth in hitting percentage with averages of .288 and .280 respectively.

Eastern is the only team in the conference to have two players in the top five in the category.

Switching to setters, Bailey DeMier of Murray State leads the conference with 11.11 assists per set, which also ranks 10th in the nation.

She was named OVC Setter of the Week on Monday.

Eastern’s Summerlyn Smith ranks sixth in the OVC with 6.56 assists per set.

The OVC also has three of the top liberos in the nation, at least in terms of digs per set.

The OVC is the only conference with three players in the top 20 in digs per set.

Eastern’s Christina Martinez Mundo ranks fifth in the OVC with 4.69 digs per set.