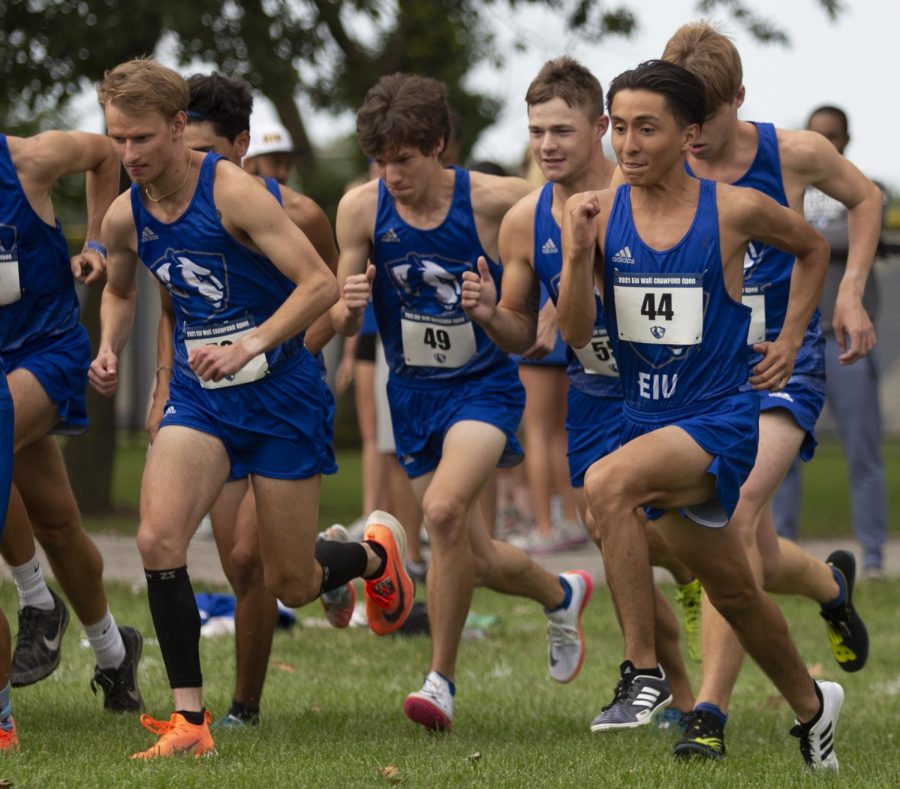 Members of the Eastern men's cross country team begins the 8K race in the EIU Walt Crawford Open on Sept. 3, 2021, at the Tom Woodall Panther Trail. Both the men's and women's teams won the meet.

The Eastern cross country teams continued their seasons over the weekend, competing in the Bradley “Pink” Classic on Saturday.

The men’s team finished second while the women’s team came in 13th place.

In the men’s 8K race, the Panthers had three runners finish in the top six.

Dustin Hatfield finished second overall with a time of 23:51.9. The time ranks as the fourth-best 8K times in Eastern history, but it is not even Hatfield’s best time of the season.

In the team’s previous meet at Louisville on Oct. 2, Hatfield set a school record with a time of 23:28.2.

There have only been seven instances in Eastern history where a runner completed an 8K in under 24 minutes, and Hatfield has now done it twice.

Franky Romano and Jaime Marcos finished fifth and sixth with times of 24:09.7 and 24:14.3 respectively.

Wichita State won the meet with 104 points while Eastern placed second with 125 points.

Dais Malebana of Nebraska placed first overall with a time of 23:41.1. The Huskers placed fifth with 160 points.

The women’s team got to a 13th place finish out of 37 teams thanks in part to the continued success of Lindsey Carlson.

Carlson has placed first on the team in all four meets this season, finishing sixth at Bradley with a time of 21:03.5 in the 6K.

She was named OVC Female Runner of the Week after each of the first three meets of the season for the Panthers.

Second on the team for Eastern was Kate Bushue with a time of 21:37.7, finishing in 28th place.

Nebraska finished in first on the women’s side with 122 points, 14 points ahead of second-place Iowa.

The top individual finished was Wichita State’s Yazmine Wright with a time of 20:35.5. The Shockers placed 16th as a team with 425 points.

Both the Eastern men’s and women’s cross country teams will be back in action in Nashville on Oct. 30 for the OVC Championship.

The men’s team will head to Tennessee in an attempt to repeat as conference champions.