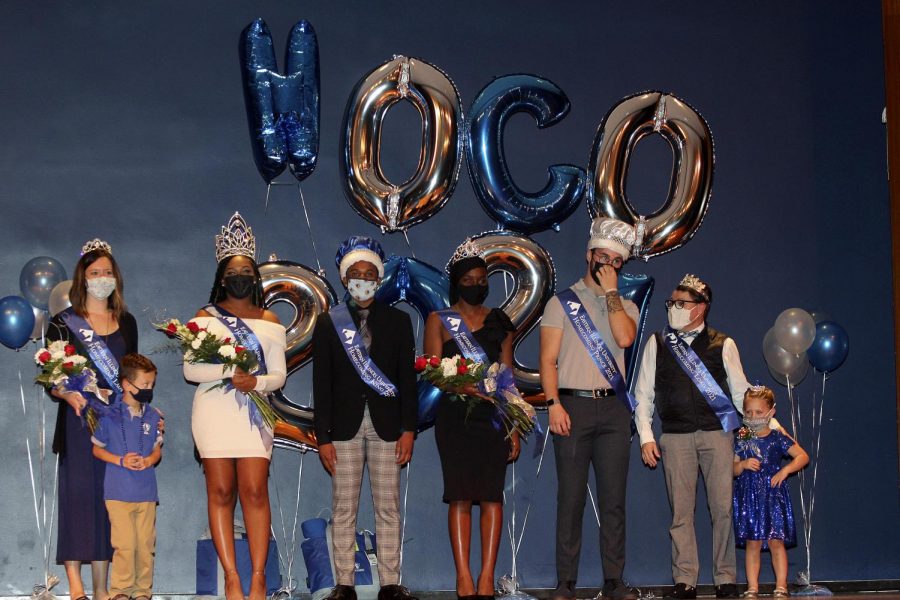 Eastern’s 2021 Homecoming Royalty was announced and coronated on Monday night.

The 2021 Homecoming Queen is Jacqueline Williams, a senior majoring in kinesiology.

Williams is also the Student Body President and a member of Delta Sigma Theta Sorority, Inc. She represented both Monday.

Williams said she was excited and surprised to receive the title.

“I actually didn’t know I was going to win. This is my favorite part of homecoming honestly. I’m excited to go to the pep rally and cheer on my sorority sisters and I enjoy coming back after COVID, that’s really something I’m looking forward to show that school spirit and panther pride,” Williams said.

The 2021 Homecoming King is Jerimiah Boyd-Johnson, a senior from Chicago, Illinois, majoring in political science.

Boyd-Johnson is a part of several campus organizations such as the Black Student Union, Alpha Phi Alpha Fraternity Inc., the Student Police Advisory Board, and the search committee for the Chief of Police. He represented his fraternity Monday night.

“I am so excited to be homecoming king. I mean, you guys really don’t know what this means to me,” Boyd-Johnson said. “Especially like last year with the insensitive slogan, and for me to be able to come back and feel comfortable at homecoming. It’s much more meaningful than just getting up on stage and winning the award and stuff.”

Boyd-Johnson said that he wanted to be Homecoming King to improve Eastern’s community.

“For any student who comes from a low inner-city community, you can come to EIU and make something of yourself,” Boyd-Johnson said. “I feel like there’s more work to be done. As the homecoming king I need to set the tone for the campus and actually let people know outside of this there’s more work and service that needs to be done and that’s what I’m ready to work on. Let’s make EIU a better place.”

Boyd-Johnson said he wanted to connect with other students.

“Any student who feels like they don’t belong here, come talk to me,” Boyd-Johnson said.

The 2021 Homecoming Princess is Jaeda Franks, a sophomore from the south suburbs of Chicago, majoring in biological sciences.

This was Franks’ first time running for homecoming court at Eastern.

Franks is involved in different RSO’s on campus such as the Black Student Union, the EIU Cheer Team. She said plans to get involved more on campus. She represented BSU Monday.

“I ran today for the week so I can show African Americans that we can do it,” Franks said.

The 2021 Homecoming Prince is Hunter Kidwell, a sophomore from Indianapolis majoring in physical education.

Kidwell is a part of the Sigma Nu and teaches classes at the Recreation Center. He represented his fraternity Monday.

“I was shocked a little bit. I don’t know, but I wanted to win,” Kidwell said.

Kidwell said he was most looking forward to the opportunity to meet new people around campus.

“I’m a very social guy and it’s nice to meet people. I’m ready for the social side.” Kidwell said.

The 2021 Faculty/Staff Lady is Amanda Harvey, an instructor in the department of public health. Her son, Beau Harvey, is the 2021 Little Prince.

The 2021 Faculty/Staff Lord is Director of Fraternity and Sorority Programs Nathan Wehr and the 2021 Little Princess is Stella Reifsteck.

“We were really surprised and to have my son with me, it was a lot of fun,” Harvey said. “For him, we nominated him and had to do a short video which he loved and for us we nominated faculty and staff.”

University President David Glassman presented each of the winners with their crown, sash and prizes.

“It’s awesome. It’s awesome to have everybody back in-person having a coronation, having a full homecoming week. I love it. I just love it,” Glassman said.

Glassman said that the coronation was a “special night” for everyone involved.

“Well of course everybody loves the coronation and to see who’s going to be the next king and queen and it’s highly suspenseful and, boy, there were a great number of Homecoming Queen candidates. All of them were great… Happy homecoming to everybody, let’s have a wonderful Homecoming this year,” Glassman said.