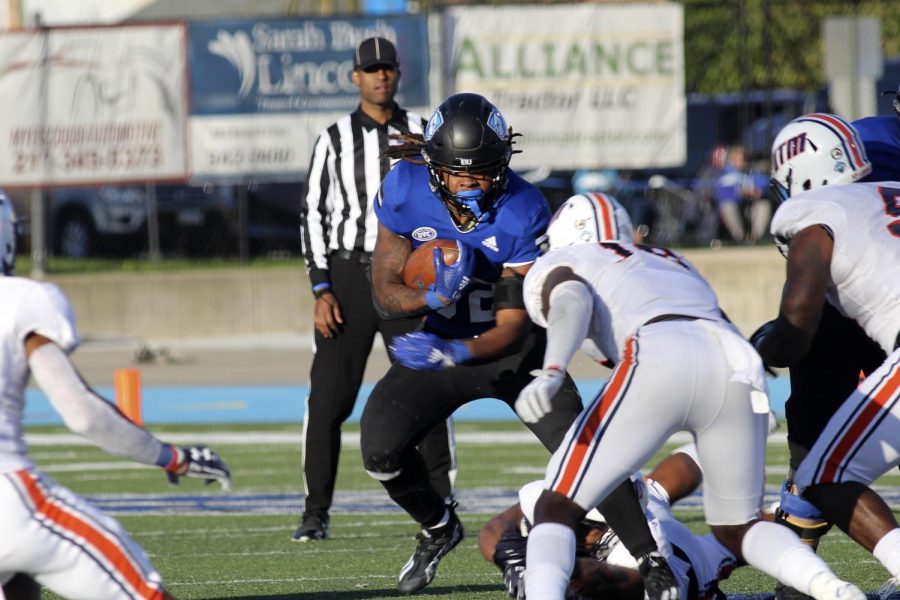 Eastern running back Harrison Bey-Buie runs to his right in the game against Tennessee-Martin on Saturday at O'Brien Field. Bey-Buie ran for 99 yards in the game, which Eastern lost 28-17.

The Eastern football team held a lead over No. 16 Tennessee-Martin Saturday afternoon but could not complete the upset, falling 28-17. Head coach Adam Cushing said that the loss was a result of some major miscues in the game.

“That was a really good football team that we just played and we went in obviously at halftime up a few points and they won the second half,” he said. “They made plays in the second half and quite honestly we as coaches did not put our guys in the right positions to make the plays that we needed to make obviously there were some miscues in the game that were one hundred percent on us as coaches.”

The biggest miscue of the game came after the Skyhawks blocked a punt that was scooped up by linebacker D’Carrious Stephens and returned for a 34-yard touchdown with a little over five minutes to play in the first half.

Cushing said that the blocked punt was a huge miscue but the offense and defense still played complimentary ball in the first half.

“Obviously the first one is the blocked punt for the touchdown that’s a huge play in the game,” he said. “It’s a totally different football game if they got no points on the board. Our defense was really playing well, obviously. We had a bunch of possessions as an offense and it took us a while, they’re a good defense too, they are really good on defense. It took us a while to get the ball moving but our defense and offense were playing some good complimentary ball there in the first half.”

The Panthers’ offense quickly responded with a successful 33-yard field goal attempt by Stone Galloway to cut the lead to 7-3 with a little over three minutes to play in the first quarter.

Early in the second quarter, the Panthers defense recovered a Skyhawks fumble to give the offense good field position at the Skyhawks 31-yard line. Quarterback Otto Kuhns would then run the turnover in for a touchdown six plays later, giving the Panthers a 10-7 lead.

The Panthers would continue to build their lead. Kuhns connected with wide receiver DeAirious Smith midway through the second quarter with a 6-yard touchdown pass to put the Panthers up 17-7 over the Skyhawks.

Running back Harrison Bey-Buie led the Panthers with 99 yards on the ground with 90 of those being in the first half. Markenzy Pierre had 2 catches for 36 yards, leading the Panthers in receiving.

Cushing said that the spreading out of their offense comes as a result of not just focusing on one player.

“It’s certainly intentional, we’ve got a bunch of big playmakers on our sideline and it’s kind of been our formula for moving the ball,” he said. “The last couple of weeks, with the bye-week, we’ve been trying to evaluate why we’ve been a little bit of a roller coaster offensively and when we’ve been good it’s just been distributing the ball around and making sure that the play just goes to whoever is in that position not necessarily just focusing on that one guy.”

The Skyhawks managed to cut the margin to a field goal just before halftime after running back Zak Wallace had a 3-yard touchdown. Wallace has 125 yards and 2 touchdowns to finish the game.

The Panthers’ offense was held to just six offense snaps in the third quarter as the Skyhawks had possession of the ball for almost thirteen minutes. The Skyhawks continued to control the momentum of the game going into the fourth quarter.

Quarterback Keon Howard connected with wide receiver Donnell Williams to cap off an 11-play drive just a minute into the fourth quarter giving the Skyhawks a 21-17 lead over the Panthers. Running back Zak Wallace would score once again with just two minutes to go in the game, sealing the 28-17 win.

Cushing said that that team can get over this offense hump they have been experiencing if they take the time to do the ordinary things correctly.

“I think that absolutely we can, number one. Number two, it’s just those details.,” he said. “We say all the time that champions aren’t champions because they do anything extraordinary but because they do the ordinary things better than anyone else and when you look at those couple of plays, a blocked punt for a touchdown, it was just an ordinary thing that we just didn’t execute on. The touchdown that we gave up on defense obviously the big one got called back. Those little ordinary things are the things that we are not doing for four quarters. It’s finding those ordinary plays and making sure we don’t get lost in trying to make that huge play.”

The Panthers will be back in action for the annual Homecoming game next Saturday at O’Brien Field against Tennessee State.