Panthers ready to host No. 17 Skyhawks 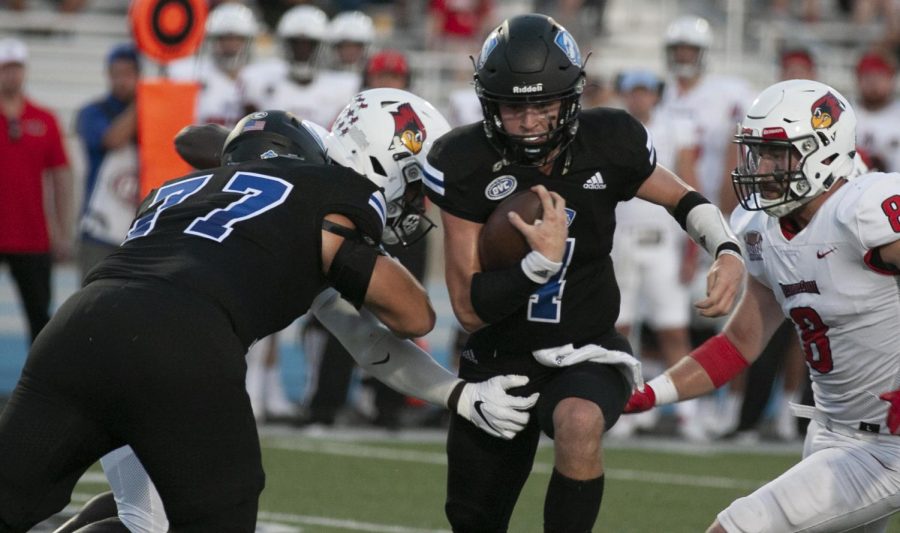 Eastern quarterback Otto Kuhns runs between a pair of defenders and gets a block from Ivan Gleyzer in a game against Illinois State on Sept. 18 at O'Brien Field. Kuhns threw for 204 yards and ran for 43 in the game, which Eastern lost 31-24.

The Eastern football team is coming off their first bye-week of the season and will be taking on Tennessee-Martin for the annual Hall of Fame Game this Saturday.

Head coach Adam Cushing said that the team spent their bye-week recovering and preparing for Saturday with short but intense practices.

“We gave the guys a little extra time off last Monday and Tuesday just from football,” he said. “They had to come in and get a lift on Tuesday and then Wednesday, Thursday, Friday we just had short but intense practices. Some of the guys that had a lot of reps let them have a little time off and we played a little scrimmage with the young guys that haven’t played any reps.”

The Skyhawks are currently ranked No. 17 in the Stats Perform FCS Top 25 and are tied with the Panthers for first place in the OVC.

The Skyhawks are led by quarterback Keon Howard who ranks 25th in the FCS in total offense with 287 rushing yards and 1,022 passing yards. Howard also has 6 rushing touchdowns and 8 touchdown passes.

The Skyhawks are first in the OVC for total offense averaging 437 yards per game.

Defensively, the Skyhawks are led by safety Deven Sims who has 36 tackles and rover JaQuez Akins who leads the team with 3 sacks. The Skyhawks are fifth in the OVC for pass defense allowing 213 yards per game through the air.

Cushing said that going up against a nationally ranked team does not change their preparation.

The Panthers’ pass defense continues to do well as they currently rank 8th in the FCS allowing just 157.8 yards per game through the air. They have held five of their six opponents to less than 175 passing yards.

Defensive back Russell Dandy was named OVC Defensive Player and Newcomer of the Week following his performance against Murray State. Dandy had 7 solo tackles and forced all 3 turnovers in the game with a pair of interceptions and a forced fumble.

Linebacker Jason Johnson finished with 12 tackles at Murray State. Johnson now leads the OVC in tackles with 57 including 33 solo tackles and 5 tackles for loss.

Defensive lineman Jordan Miles leads the OVC in both tackles for loss with 9.5 and sacks with 3.5.

Offensively, wide receiver Arron Foulkes is second on the team with 12 receptions but leads with 214 receiving yards. His 17.8 yards per reception ranks third in the OVC.

Harrison Bey-Buie leads the Panthers with 249 rushing yards and ranks eighth in the OVC after rushing for 41 yards on 13 carries at Murray State.

The Panthers average 26:59 in time of possession following their performance against Murray State. Going forward, Cushing said that the coaches have to create a stable environment so that the offense has time to make key plays.

“It’s obviously just consistency offensively, we’ve had kind of a roller coaster,” he said. “We’ve had games where, you know, you look at the second half of the Illinois State game, the offense was on the field for 50 plays and the defense was out there for 20. So, it’s just looking to be consistent from one game to the other because every time we’ve put together a good game offensively, we don’t follow it great. It comes with confidence and keeping the group healthy. We’ve had a bunch of injuries on the offensive side of the ball and it’s not an excuse. On us as coaches, we’ve got to create that stabilization so that whoever it is can step in and make the best play.”