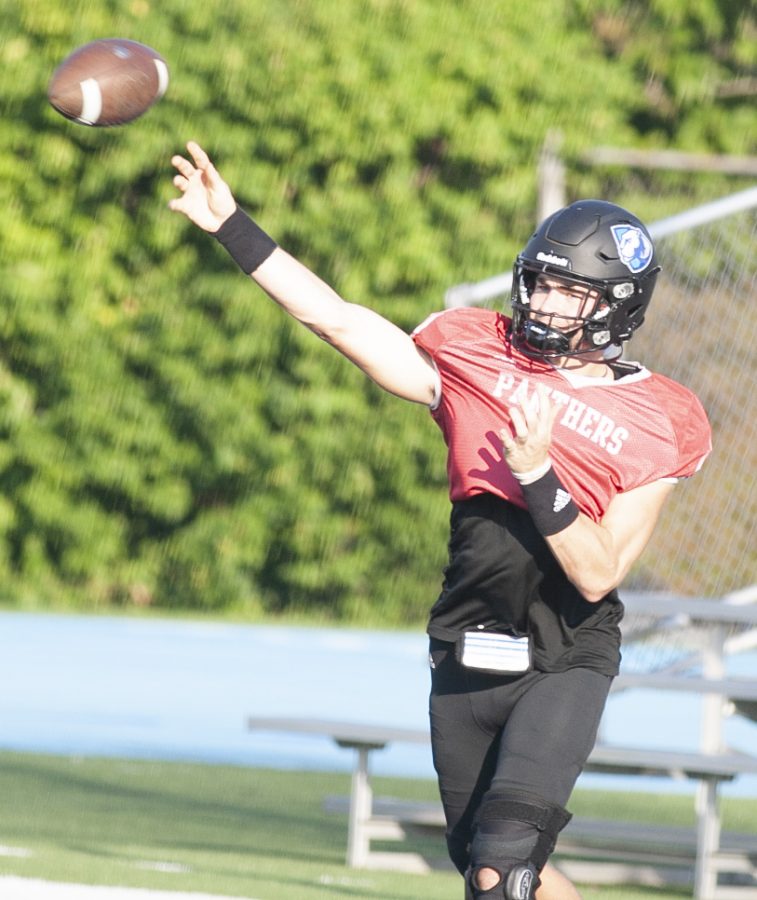 Eastern quarterback Otto Kuhns throws a pass during a drill in practice on Sept. 29 at O'Brien Field. The Panthers will be hosting Tennessee-Martin on Saturday.

Week 6 of play for the OVC had five teams competing for wins last Saturday while the others took advantage of a bye week. Let’s begin with Tennessee-Martin taking on their OVC rival, Murray State.

Week 6 of Play started off with the Skyhawks and Racers going head-to-head in a league opener at Hardy M. Graham Stadium. The No. 21 Skyhawks beat their conference rival 48-28 pushing their winning streak to four games and their overall record to 4-1.

The Skyhawks had not played a home game in 28 days prior to last Saturday but they responded quite well by scoring on their opening drive. They eventually went on to score 35 unanswered points against the Racers’ defense, which is ranked second in the OVC.

The Skyhawks, now ranked first in the OVC, relied on the performance of running back Zak Wallace. Wallace had 67 yards on 14 carries and a career-high of 3 rushing touchdowns. This was the first three-touchdown rushing performance since 2014.

Skyhawks graduate quarterback Keon Howard also led the Skyhawks into the win column. Howard was 12-of-18 passing for 171 yards and one touchdown. Howard is known for being a dual-threat player and he certainly proved that to the Racers after having 9 carries for 98 yards and scoring his sixth rushing touchdown of the season.

Wide receiver Colton Dowell had 3 catches for 86 yards, including a 49-yard reception. Dowell now has 1,731 career receiving yards which puts him in eighth place on the Skyhawks’ all-time leaderboard. The Skyhawks also made some helpful contributions from the defensive side.

In the second quarter, linebacker Tevin Shipp had his first career interception and returned it 47 yards for a touchdown. Safety Takeem Young and Deven Sims led the game with10 tackles and one pass breakup each.

Southeast Missouri and Austin Peay had their matchup at Fortera Stadium last Saturday. The Redhawks never trailed to the Governors, resulting in their first road win of the season, 30-14.

The Redhawks had a season-high of 6 takeaways which was the fifth time in six contests this season. Redhawks’ defense took control of the momentum early and came up with two in the first quarter.

The Redhawks started five of their drives inside Governors’ territory due to their defense which was led by defensive back Ty Lenoard. Lenoard had 9 tackles and 1 interception. Linebacker Brandon Mincey had 6 tackles while defensive back William McCall had 8 tackles.

The Redhawks’ offense also put up a good performance. Running back Geno Hess carried the ball 28 times in 116 yards and averaged 4.1 yards per touch. Hess now has 9 rushing touchdowns after recording 3 touchdowns on Saturday.

Tennessee Tech took control of the game early against North Carolina Central during their matchup last Saturday helping the Golden Eagles take the 27-16 win over the Eagles.

North Carolina Central attempted to punt the ball away to open the first quarter but Golden Eagles defensive back Aidan Raines blocked the punt that resulted in NC Central turning the ball over on downs. A penalty against the Eagles allowed Golden Eagles quarterback Willie Miller to push forward for a touchdown with 13:32 remaining.

Kicker Adrian Olivo completed a 34-yard field goal to extend the Golden Eagles’ lead to 7-3. The Golden Eagles extended their lead to 21-3 at halftime. The Eagles cut into the lead with a little over eight minutes remaining in the game after Davius Richard connected with Andrew Smith on a 48-yard touchdown pass.

The Eagles were able to score with seven seconds remaining, but the Golden Eagles held on to their lead, sealing the win. Running back David Gist set his career-high in rushing yards picking up 143 yards on 19 carries, averaging 7.5 yards per rush. Quarterback Willie Miller ended the game with 145 passing yards on an 11-for-22 effort.

Defensively, the Golden Eagles were led by Kail Dava and A.J. Hall who had solo tackles. The Eagles were held to 58 yards on the ground.

Six of the seven OVC teams will be back in action this Saturday, Oct. 16.