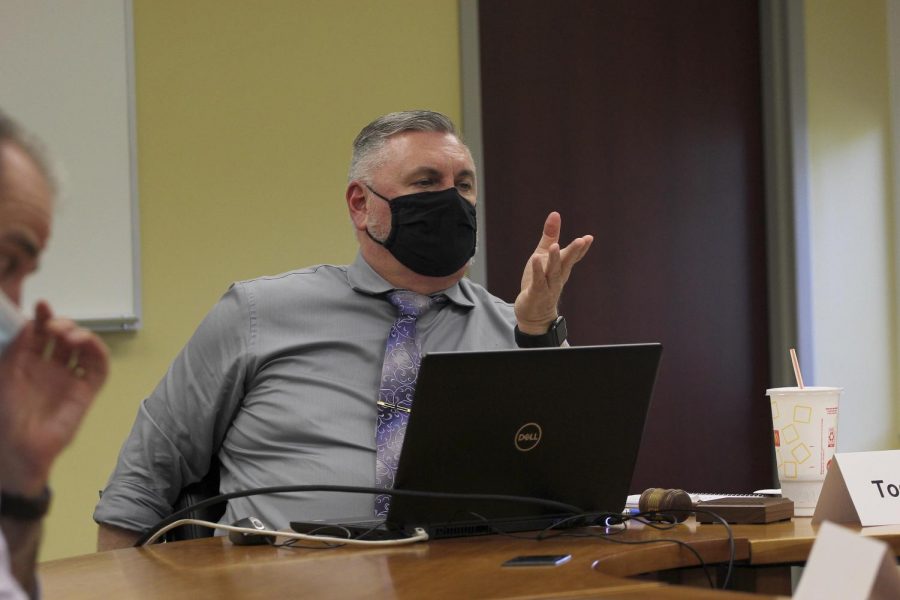 A Faculty Senator was appointed to Eastern’s Naming Committee, which will meet Thursday at 9 a.m. to discuss the Douglas Hall renaming.

Faculty Senator Steven Scher, a psychology professor, was appointed by the senate to join the Naming Committee, which was announced in their meeting Tuesday.

The renaming of Douglas Hall has been an ongoing debate due to the history of the hall’s namesake.

Eastern’s President David Glassman sent an email on Tuesday to students and faculty to open up for suggestions for a new name.

If the Board of Trustees approves the Naming Committee’s recommendation to change the name, Glassman said the university’s next step would be to get a list of names ready to be considered to replace “Douglas.”

Anyone in the community, on or off campus, can submit their suggestion for the renaming on an online form at https://eiu.co1.qualtrics.com/jfe/form/SV_5p9gvKnkI7PIELA?utm_campaign=Douglas%20Hall%20Renaming%20Suggestion&utm_term=using%20this%20online%20form&utm_medium=email&utm_source=directmailmac.

All name suggestions will be accepted through Oct. 29.

During the Faculty Senate meeting Tuesday, the senate discussed some of the key points of President Glassman’s State of the University address.

Teshome Abebe, a professor of economics and faculty senator, said he felt positive about President Glassman while the senate was reflecting on Glassman’s announcement of his retirement plans,

“I have worked with quite a few presidents… about nine. And I will tell you, my colleagues, Glassman is the best president,” Abebe said.

Abebe said he thought of Glassman as the best president during his time here at Eastern because he is humble, and Glassman has seen Eastern through two major issues, the budget impasse and the COVID-19 pandemic.

Next, the senate discussed Glassman’s goals for enrollment and how Eastern’s enrollment numbers look.

“In the context of the larger, higher education environment, especially in the context of regional state schools, our enrollment growth is remarkable and really something to be applauded,” Parrish said.

Alicia Neal, an associate professor of music and faculty senator, said that her hands-on relationship with recruiting gave her perspective on the enrollment growth.

“I think a lot about recruiting all the time. I’m always out recruiting and doing a kind of feet on the ground, so last year was pretty brutal,” Neal said.

“I do recall hearing that for prospective students, often EIU starts out as being the third or fourth choice. When they come to campus, that changes, and it becomes their top choice. Considering that in the past year, we couldn’t bring students here, really, that was perhaps a big part of why we weren’t able to get those freshmen,” Bruns said.

In the Faculty Senate meeting, they had Brad Bennington, registrar, as a guest speaker to discuss an upcoming Degree Works update.

Degree Works is a program designed to help students easily follow their progress towards getting their degree.

Beginning in the spring semester, students will have the 5.04 version of Degree Works available to them.

Bennington said the biggest changes will be the program’s appearance, but all functions will remain the same.

Faculty Senate will meet next on Oct. 26 at 2 p.m. in Witters Conference room in Booth Library.