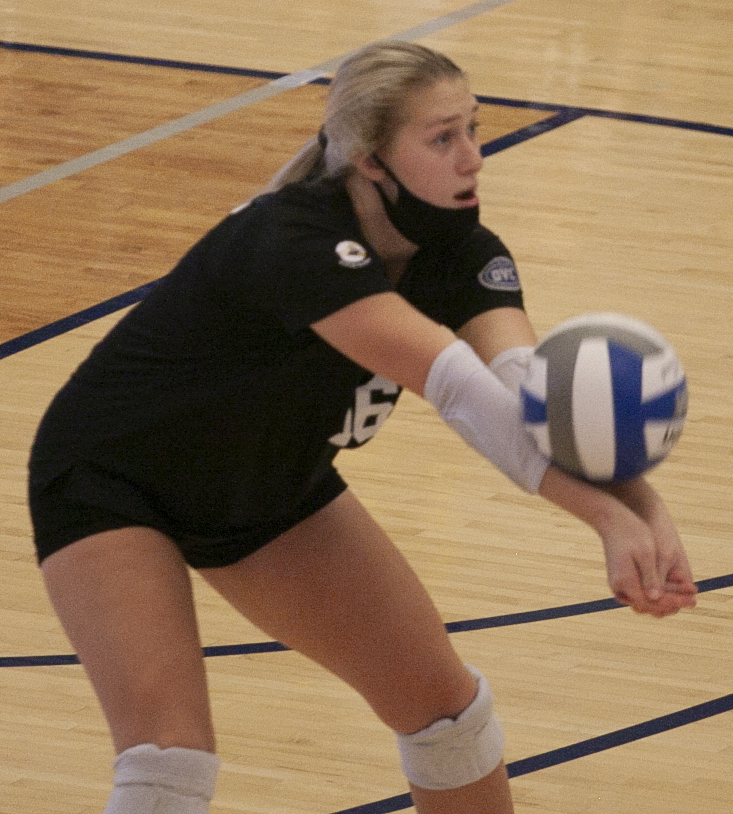 Eastern defensive specialist Ashley Sharkus receives a serve in a match against Southeast Missouri on Oct. 9 in Lantz Arena. Sharkus had 4 digs and a service ace in the match, which Eastern lost 3-0.

There have now been more than three weeks of conference play for the volleyball teams of the OVC.

Now that there is a bigger sample size for the teams, the OVC standings are starting to take more substantive form.

Let’s look at each team and how they fared in recent conference matches and what they have coming up.

The Skyhawks are currently the hottest team in the OVC, riding a six-match winning streak to their current conference record of 6-1.

Their most recent wins came over Murray State over the weekend by scores of 3-2 and 3-1 and they will play a midweek match with Southeast Missouri Tuesday.

In conference play this season, the Skyhawks ranks second with a .214 hitting percentage and their conference opponents have hit .159, the third lowest mark in the OVC.

The Governors started conference play 4-0, and now sit in second place with a 5-1 conference record.

They split a pair of weekend matches with Tennessee Tech and will face Murray State at home for a midweek match on Wednesday.

The Redhawks are one of three OVC teams with a conference record of 5-2. They are currently riding a four-match winning streak, the third-longest active winning streak in the conference.

Their last two wins came on the road against Eastern, and they will travel to play Tennessee-Martin in a matchup of two of the OVC’s top teams on Tuesday.

They are also one of four OVC teams hitting above .200 in conference play, ranking third with a .207 hitting percentage.

Also at 5-2 this season are the Golden Eagles of Tennessee Tech.

They are coming off a loss to Austin Peay in their last match and have a pair of matches with Murray State scheduled for this weekend.

They have been the top attacking team in the OVC in conference play, ranking first with 13.93 kills per set.

The Eagles are currently the second-hottest team in the OVC, having won five conference matches in a row to improve their conference record to 5-2.

Their last three wins have come on the road, with a midweek victory over Tennessee Tech and a pair of weekend wins against Tennessee State. They will host Morehead State for a pair of matches this weekend.

Morehead State is allowing its OVC opponents to hit .159 so far, the second-best mark in the conference.

The Bruins sit in sixth place in the OVC with a conference record of 3-4.

They are coming off a weekend in which they split two matches with Southern Illinois-Edwardsville and now have a match with Tennessee State set for Tuesday.

They are averaging 11.64 kills per set in conference play, the second-fewest in the OVC.

The Racers had a successful nonconference portion of the season, at one point leading the nation in kills per set.

Conference play has been less fortuitous for the Racers, who now sit at 2-4.

Their kill numbers are still solid, ranking fifth with 13.13 kills per set in conference play.

The Cougars have gone 2-1 in the past week after an 0-4 start to conference play.

They beat Eastern in a midweek match last Tuesday and then split a weekend series with Belmont.

They rank sixth in hitting percentage and seventh in kills per set in conference play.

They have lost four in a row, including a pair of weekend matches against Morehead State.

The Tigers rank last in the OVC with 11 kills per set during conference play.

The Panthers are still searching for their first conference win this season, having started out 0-7.

Their most recent losses came at home over the weekend against Southeast Missouri.

The Panthers are being outhit .262 to .132 in conference play and rank eighth in the OVC in kills per set with an average of 11.65.