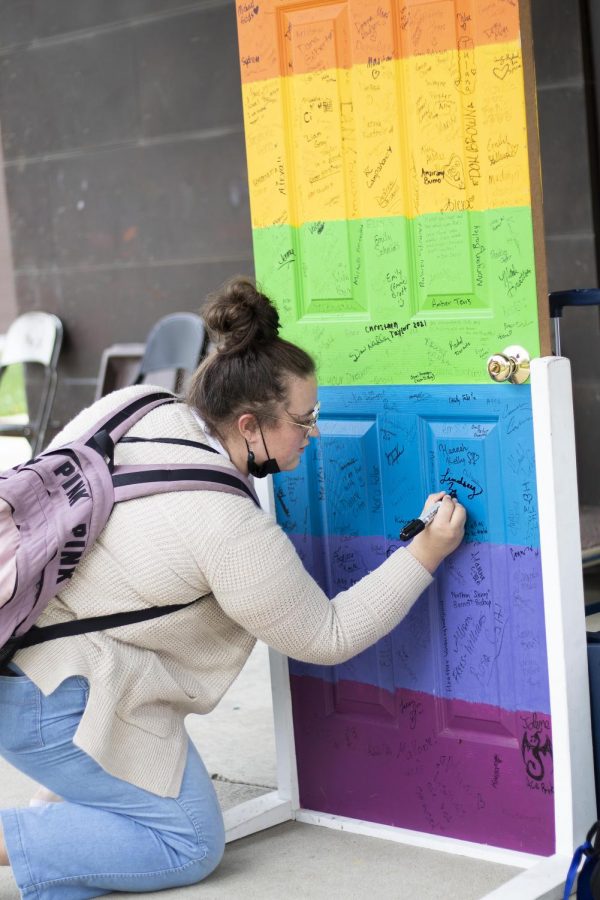 Lindsey Zike, a freshman art education major, signs her name on a rainbow door for National Coming Out Day.

Staff from Eastern’s Center for Gender and Sexual Diversity rolled out the rainbow door for people to sign in recognition of National Coming Out Day.

On Eastern’s campus, students often sign their names on the rainbow door which usually resides in the GSD Center so that their names will be memorialized alongside past and present students who are members or supporters of the LGBTQ+ community.

The center also offered contraceptives and pronoun pins to people who came by to sign the door or just ask about Coming Out Day.

The pins include a variety of different pronoun and color options. People wear these pins so that others will know the right terms to use when referring to them and to remind others that they can’t always assume people’s pronouns based on their appearances.

Amanda Wright, a senior psychology major and undergraduate assistant at the GSD Center, played a large part in expanding the options for pronoun pins this year.

Wright designed and created pins that say, “Hello. My pronouns are…” at the top and have information about the GSD Center at the bottom, but have a space in the center of the button for people to write their own pronouns in.

“That way you could Expo marker it in, if you’re in an unsafe space where you can’t use those pronouns, you can just wipe them off and use new ones,” Wright said. “Or if you want to change, you don’t have to come down to the center and explain or get a new button- just there you go. You can do it yourself.”

Wright also designed buttons that feature colors from pride flags for different sexualities and gender identities, so that people can show pride in their identities along with informing others of their pronouns.

The tabling and door-signing event began outside of Doudna on the Library Quad but moved inside to the Stevenson lobby after a few hours due to incoming rain.

Pilar Barrio, a graduate student studying communications and current grad assistant at the GSD Center, said that the wind was an issue as fewer people wanted to stop at the table and contraceptive materials were picked up in the breeze and spread over the quad.

However, Barrio said that tour groups on campus showed some interest in the event as families stopped to ask what the door and table were set up for.

“There was even like a fifth-grade girl that was so interested and asked so many questions and was so pure, she signed the door too, so excited,” Barrio said.

The door has been a hallmark of the GSD Center for several years and is slowly filling up as students find new places to add their names.

Wright said that alumni often stop by and search through to find where they added their own names in years past.

Recently, some students have created a tradition of signing the door a second or even third time as they discover and change their identities in their college years.

Some even sign with a new name, often because they’re identifying with a different gender than before.

Ci Richardson, a senior music education major and president of Eastern’s Pride Club, said they feel the door represents the metaphor of “coming out of the closet” since it somewhat looks like a closet door.

Richardson signed the door with a list of their identities but encouraged others to be careful coming out until they can be sure they will be safe.

“Also, it’s okay if someone has to take time to process because like if you’re coming out as transgender, your parents are going to have to take a moment to process because you are no longer for example, their daughter, you’re their child, and they’ll have to process that and that’s perfectly okay,” Richardson said. “However, it is not okay, if they treat you differently, or just react badly- that is not okay.”

Richardson said that transgender people who aren’t safe to come out but want to feel comfortable in their gender presentation could look online find subtle ways to explore without endangering themselves.

Michael Fields, a senior political science major, said that coming out was a big deal for him as he told those close to him about his identity in small groups, rather than all at once.

“I grew up in a conservative Christian family where the idea of being LGBTQIA+ wasn’t supported, so I came to college and dove headfirst into conservative clubs and Christian organizations thinking I could change it,” Fields said. “It took a couple of years for me to finally get to the place where I could come out and be comfortable doing that.”

Fields said that Coming Out Day was a day to celebrate authenticity and his ability to be himself.

Rhys Barnes, a senior music education and composition major, said that to them, the day was a celebration of growth and recognizing how far they had come since the year before, since they have come out several times during the process of understanding their identity.

Barnes said that they saw the rainbow door as a symbol of triumph along with its references to the “closet” metaphor.

“This door, however, stands proud with no closet in sight. There is nothing to hide away – only names proudly displayed. It’s a wonderful art piece,” Barnes said. “It also serves as a way for people to more subtly ‘come out’ if they need to. Without saying anything out loud, they can sign the door. They don’t need to disclose the specific identity or allyship that brings them to the door, but it’s something physical and tangible that they can do to bring themselves closer to their true selves.”

Hope Eagan, a freshman music education major, had a similar interpretation of the door’s meaning.