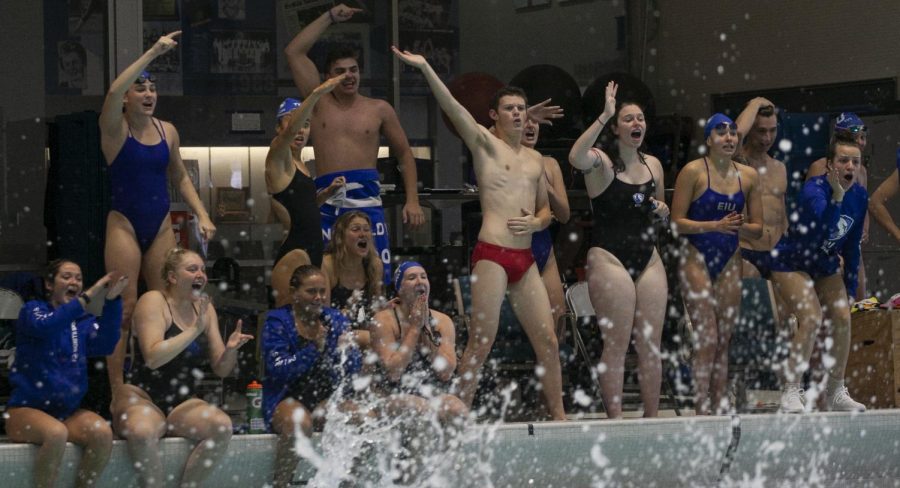 Members of the Eastern swim team cheer on one of the men's 200-yard freestyle relay teams as they head down the final stretch in a meet against Evansville Oct. 9 in Padovan Pool. The team of Forrest Baumgartner, Jarod Farrow, Dismas Dillion and Jacob Nichols won the relay, although both the men's and women's teams lost the meet.

Although the meet ended with losses for both teams, the Eastern men’s and women’s swimming teams could not contain their excitement Saturday afternoon as the men’s 200-yard freestyle relay team took first place to cap off their first meet of the season against Evansville.

Saturday marked the first meet for new head swim coach Tyler Donges, who was hired on Sept. 13. Donges said seeing the relay win at the end was an amazing feeling.

“It was just the best,” he said. “We knew that things were going to be a little bit rough going into Evansville just because they have a little bit of a stronger team, and they have a coach that has been there a little bit longer than I have that has been able to build a team and a rapport. Being able to see those last two relays, honestly, to come out and perform at the level that they did at the end of this meet while everybody is tired is an amazing feeling.”

The Panthers had not faced Evansville since the 2019-20 season due to COVID-19 prior to the meet Saturday. They also lost to Evansville that season, the men lost 79-121 and the women’s final was 70-162.

Donges said that he was thrilled with the performance of the men and women despite the loss.

In the women’s 200-yard medley relay, the team of Olivia Viele, Corinne Staneart, Kaylan Ottosen and Camryn Lewis came in second place with a time of 1:50.24.

Both the men’s and women’s teams will travel to Valparaiso to face the Beacons on Saturday, Oct. 23.