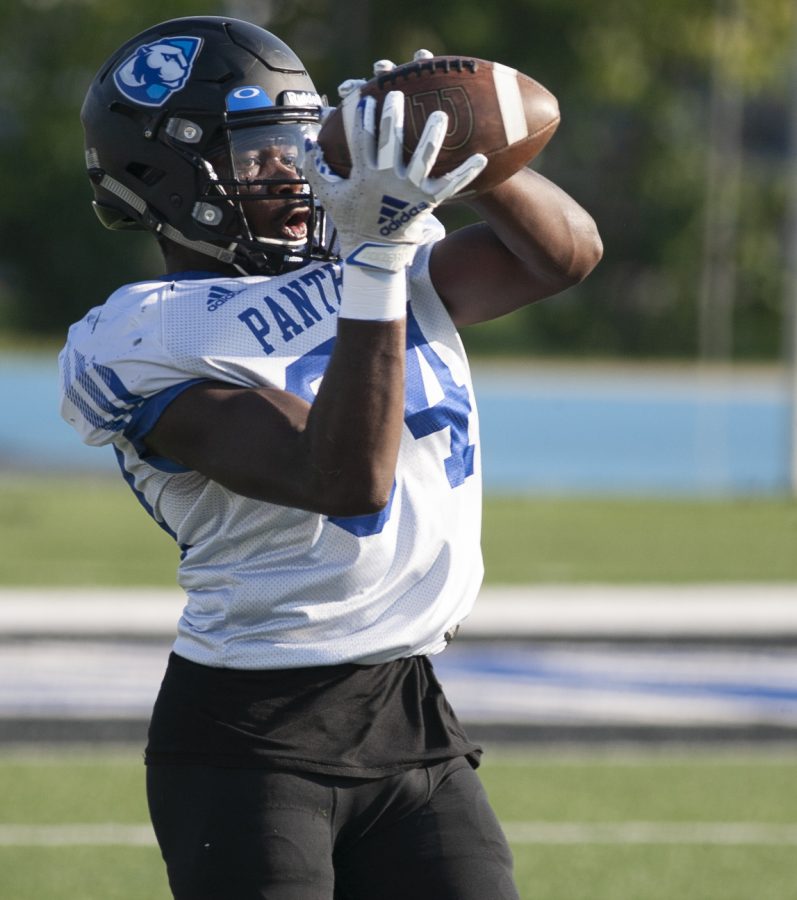 Eastern wide receiver Ryan James catches a pass during a drill in practice on Sept. 29 at O'Brien Field.

Week 5 of Play for the OVC consisted of two non-conference matchups and three teams taking home wins, one team held on by two points. Let’s take a look at how Week 5 unfolded.

The weekend started off with Tennessee Tech taking on Southeast Missouri. The Golden Eagles walked out of Tucker Stadium with a 28-17 victory over the Redhawks earning them their first win of the season.

The Golden Eagles were led by running back David Gist, who rushed for 133 total yards, a new career best. Gist went 11 yards on three catches for 144 all-purpose yards, as well.

Golden Eagles backup quarterback Willie Miller then moved his offense up the field, gaining 89 yards on eight plays. The second drive ended with Miller connecting with wide receiver Ashton Maples for a 28-yard touchdown pass, putting the Golden Eagles up 14-10.

Willie Miller was 5-of-9 passing for 74 yards and two touchdowns on the game.

The Redhawks attempted to sneak back up on the Golden Eagles late in the fourth quarter after quarterback Jalyn Williams connected with wide receiver Johnny King on a seven-yard touchdown pass and a successful field goal, making it a 28-17 game. However, the Golden Eagles managed to force the Redhawks to turn the ball over on downs at the Tennessee Tech 44, sealing the victory.

The Golden Eagles’ defense held their own against the Redhawks, holding them to 126 rushing yards. Josh Reliford led the defense with 11 total tackles.

Tennessee Tech is now 3rd in the OVC and 1-4 overall.

The next matchup last weekend was Murray State going up against Eastern Illinois. The matchup, that was considered non-conference, ended with the Racers moving to 2-2 on the season after beating the Panthers 22-6 at Roy Stewart Stadium.

The Racers built a lead over the Panthers early into the game, putting up 13 points after a pair of field goals by kicker Aaron Baum. The Panthers had a chance to lie things up in the first quarter but a missed 36-yard field goal attempt put an end to those chances.

The Racers had a successful second quarter against the Panthers. They added a 14-yard touchdown by DJ Williams in the as they rushed for 183 yards in the game and put up 200 yards of total offense compared to just 11 yards for the Panthers.

Offensively, the Racers were led by quarterback Preston Rice. Rice was 12-of-25 passing for 164 yards and 2 touchdowns. Wide Receiver LaMartez Brooks led the Racers with 5 catches for 60 yards.

Defensively, the Racers were led by Cortez Roberts with 7 tackles and Levi Metheny with 6 tackles.

Racers running back Damonta Witherspoon was 141 yards on the ground including a 5yard touchdown in the 3rd quarter that put the Racers up 19-0. It was not until the fourth quarter that the Panthers finally scored on a 54-yard pass from backup quarterback Chirs Katrenick to Arron Foulkes, cutting the lead 19-6.

Katrenick was 12-of-35 with 175 yards with 1 touchdown after taking over for Otto Kuhns in the second quarter. Defensively, the Panthers were led by Jason Johnson and Colin Bohanek who both finished with 12 tackles.

The second non-conference matchup of the weekend was Tennessee State and Austin Peay. The Tigers went on to beat the Governors 24-22.

The win for the Tigers came after the Governors failed to convert on third down late in the fourth quarter. Both teams did not score in the first half as the Tigers held Austin Peay’s offense to 5 rushing yards and 79 passing yards.

The third quarter was when both teams finally came alive. The Tigers scored when quarterback Geremy Hickbottom connected with wide receiver Rodell Rahmaan on a 63-yard touchdown pass. Hickbottom was 18-of-34 passing for 301 yards and 2 touchdowns.

The Governors answered back with a 66-yard rushing touchdown and a field goal, putting the Governors on top 10-9 with 6 minutes to go in the third quarter.

The fourth quarter was a hard-fought battle for both teams to say the least. The Governors closed the deficit to two points after quarterback Draylen Ellis found Baniko Harley on a 16-yard touchdown. The Governors went on to attempt a two-point conversion but could not come up with the extra points, sealing the win for the Tigers.

Ellis completed 25-of-54 passes for 254 yards and 1 touchdown. Defensively, Austin Peay was led by Jack McDonald who had 9 tackles.

Both Austin Peay and Tennessee State are 2-3 overall.

Five of the conference’s seven teams will be back in action this weekend.