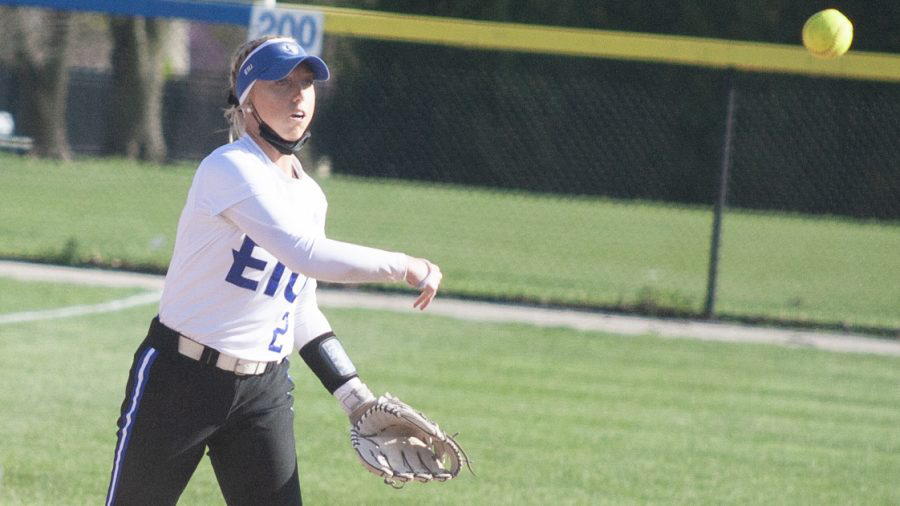 Eastern shortstop Megan Burton throws to first after fielding a ground ball at third base in the second game of a doubleheader against Tennessee-Martin April 12, 2021. Eastern lost the game 1-0.

Both the Eastern baseball and softball teams will be playing fall exhibitions.

The baseball team will play Illinois State on the road Saturday while the softball team will host Wabash Valley College on Sunday afternoon.

Both teams have some returning players that played major roles last season. Let’s look at a couple of of the top returners for each team.

Despite missing time with injury last season, Eickhoff led the OVC with a .423 batting average. He led the conference in that category by 33 points.

Eastern outfielder Morgan Lewis batted leadoff for the Panthers, helping make them one of the top offenses in the OVC.

Lewis led the team with a .357 batting average, ranking eighth in the conference. She also led the conference with 23 steals and was only caught stealing 3 times.

Shortstop Megan Burton had one of the best seasons in Eastern history last season.

Burton set a new school record with 18 home runs, which ranked 9th in the nation, and was named OVC Player of the Year. Her .759 slugging percentage was the third-highest mark in a single season in program history.

She also tied for ninth in the conference with 13 stolen bases and started all 44 games on the season.