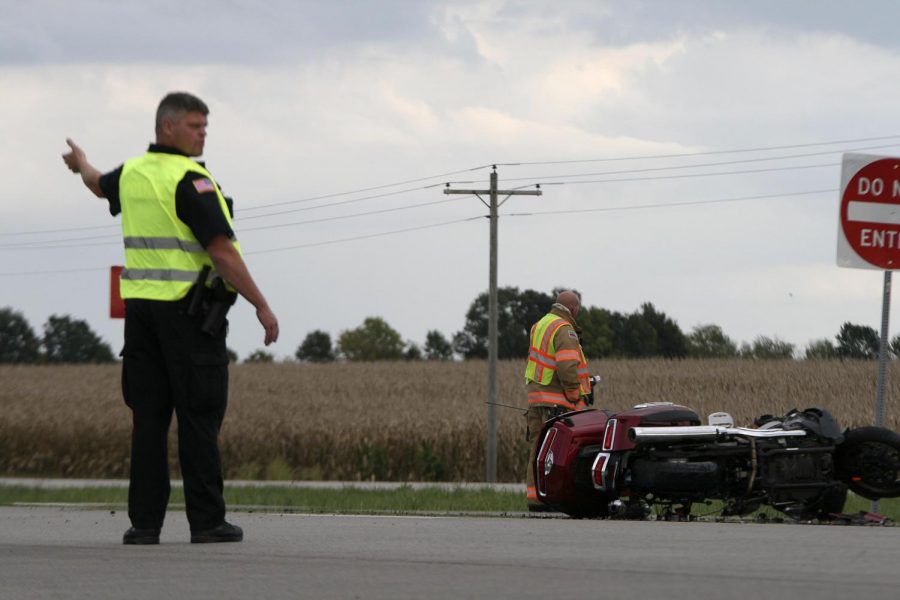 Members of the Charleston Police and Fire Departments assist at the two-vehicle crash on Route 16 and Deerpass Road Monday evening.

Coles County Coroner Ed Schniers confirmed the deaths of two motorcyclists, one on Monday and the other early Tuesday.
The first fatality was Jeffery B. Storm, 67, of Mattoon. He was pronounced dead at the scene of a crash on Route 16 on Monday around 4:18 p.m.
A preliminary investigation by the Illinois State Police indicates that Storm, who was driving a 2018 red Yamaha touring motorcycle, was traveling north on 1200 E County Road and when reaching the stop sign at the road’s intersection with Route 16, failed to yield to Forest W. Ruot, 71, or Martinsville who was driving a 2019 white Nissan Titan pickup truck.
Storm entered the intersection and was struck by Ruot’s vehicle.
The second fatality was Paul M. Rosser, 43, of Paris.
According to the Coles County Sheriff’s Department, around 12:10 a.m. Rosser was traveling west on the 100 block of Madison Avenue at a high speed when he failed to negotiate a curve in the road at the intersection with Third Street. Rosser then left the road and struck two parking blocks, re-entered Madison Avenue and traveled against traffic before striking a parked vehicle on the south side of the road.
Rosser was transported to and pronounced dead at Sarah Bush Lincoln Health Center.