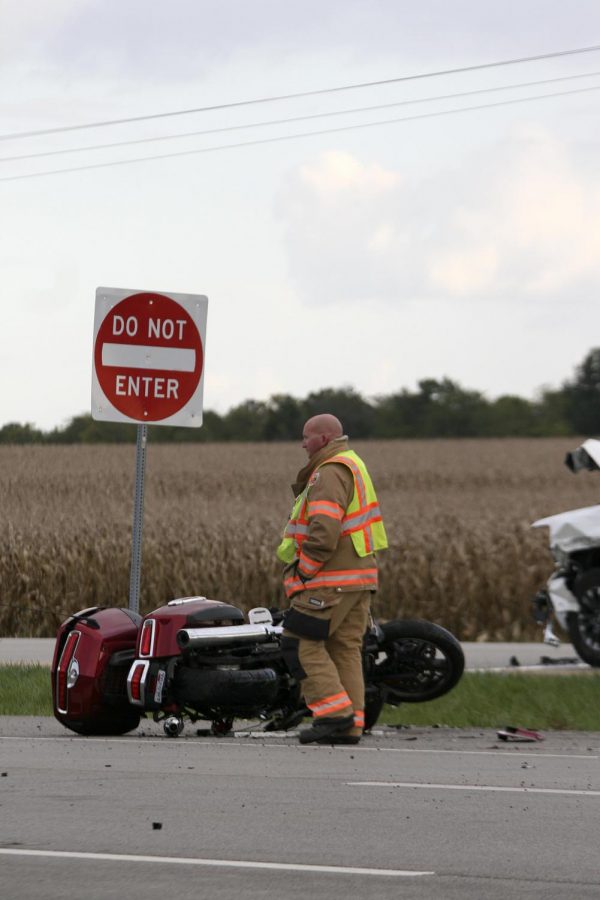 A member of the Charleston Fire Department investigates the motorcycle from the two-vehicle crash on Route 16 and Deerpass Road Monday evening.

There were three separate two-vehicle wrecks in Charleston Monday night within two hours.

The first wreck was on Route 16 near Deerpath Road at around 4:00 p.m. It involved a motorcycle and a truck.

One person was airlifted, but it is unknown which vehicle they were on/in.

Part of the front end and hood of the truck was crushed inward and pieces of the motorcycle were scattered across the roadway.

An officer with the Charleston Police Department declined to comment when ask for more information on the wreck.

The Illinois State Police came to reconstruct the scene and closed down a part Route 16 to do so.

The second wreck happened around 50 minutes after the first at the intersection of Lincoln Avenue and Ninth Street.

A truck driving east on Lincoln Avenue drove through a red light eight seconds after the light turned red as another car began to travel south on Ninth Street, according to dashboard camera footage of a vehicle parked in an adjacent parking lot.

The car hit the bed of the truck and the truck spun out onto the curb.

An officer with the CPD said there were no injuries but declined to comment further on the wreck.

Traffic was redirected at the intersection for around one hour after the wreck.

The third wreck was called in at 5:20 p.m. The two vehicles collided on Route 130 near the entrance for Lake Charleston.

A truck and car were involved in the wreck and were on the southbound side of the road.

The car appeared to have been rear-ended and there was noticeable damage to the front driver side tire of the truck.

A deputy with the Coles County Sheriff’s Department declined to comment and said more information would be available in a press release Tuesday.