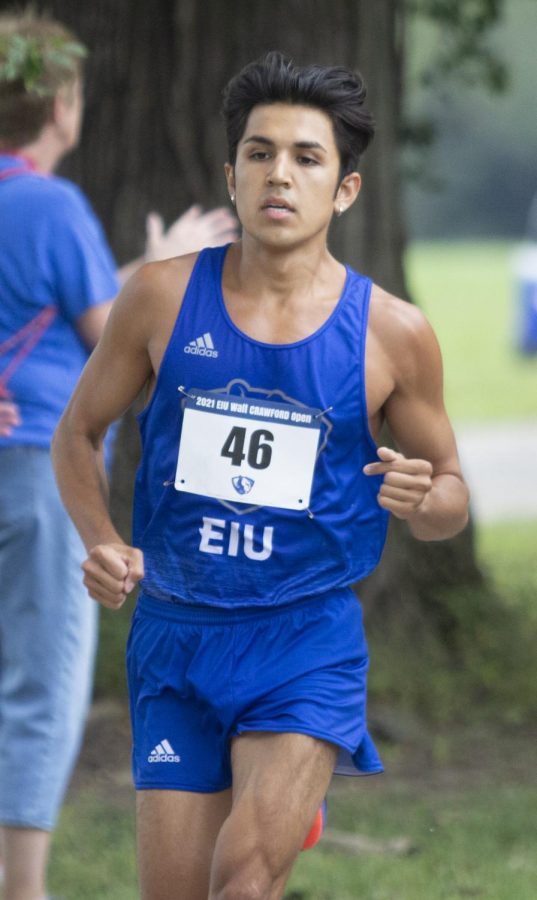 Eastern's Jaime Marcos competes in the 8K race at the EIU Walt Crawford Open on Sept. 3 at the Tom Woodall Panther Trail. Marcos placed first individually and the Panthers also won the meet as a team.

For the first time in 44 years, there are two new times sitting atop the Eastern men’s cross country record book, and they belong to Dustin Hatfield and Jaime Marcos.

Competing in the Louisville Classic on Saturday, Hatfield set a new school record in the 8K with a time of 23:28.2, breaking the record set by Joe Sheeran in 1977 by nearly 18 seconds.

Marcos was not far behind, finishing 12th with a time of 23:41.4, now the second-fastest 8K time in Eastern history.

The pair became just the fifth and sixth athletes in Eastern men’s cross country history to run the 8K in under 24 minutes.

As a team, the men placed third overall with 174 points, trailing Grand Valley State with 67 points and first-place Wisconsin with 26 points.

All of Wisconsin’s top five runners finished in the top-10 in the event.

Eastern’s top five was rounded out by Franky Romano in 29th, Adam Swanson in 58th and Andrew Pilat in 73rd.

The Panthers’ success in Louisville also had repercussions in the regional rankings.

Behind Eastern in the top 10 is Bradley, Missouri, Illinois and Iowa.

Lindsey Carlson led the women’s team for the third-straight meet to open the season, placing 36th in the 5K with a time of 17:25.1.

It was Carlson’s fastest 5K time this season. She previously posted times of 17:33.89 in the EIU Walt Crawford Open and 17:37.8 at the Indiana State John McNichols Invite.

The Panthers’ next-fastest runner on the women’s side was Kate Bushue in 55th place with a time of 17:40.6.

Michigan placed first on the women’s side with 39 points, followed by Wisconsin with 75 points and West Virginia with 122 points.

Both the Eastern men’s and women’s teams will be back in action on Oct. 15 in Peoria for the Bradley “Pink” Classic.