Living with a Bomb presentation in Coleman Hall 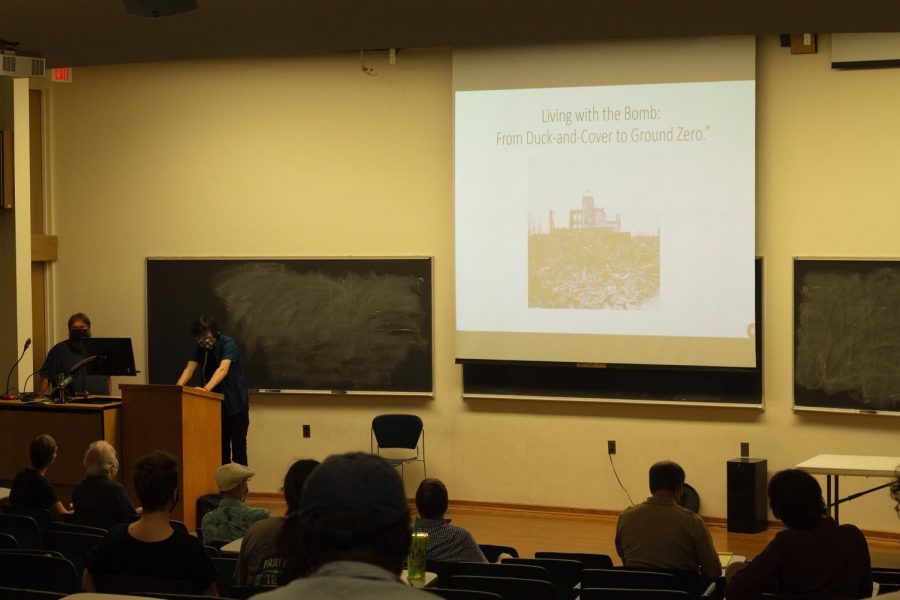 Dannie Otto and Barbara Shenk present Living With the Bomb: From Duck-and-Cover to Ground Zero in the Coleman Hall Auditorium.

Dannie Otto and Barbara Shenk, Co-Directors of the World Friendship Center, discussed their experience in a presentation titled “Living with the Bomb-From Duck-and Cover to Ground Zero” on Thursday

The World Friendship Center in Hiroshima, Japan, founded by Barbara Reynolds, is a place where survivors of Hiroshima tell their stories.

Otto and Shenk started the night with a raffle to give away two books about Hiroshima written by John Hersey, 1946. “Hiroshima” by John Hersey is about the survivors of the bombings in Hiroshima.

Afterward, Otto introduced his experience living around bombs from ages five to seven, using a video called “Duck and Cover.”

“Duck and Cover” is a film that was made in 1951; Otto used it to help the audience visualize what it was like being a child and surviving in a world of bombs.

“This video will explain our childhood experiences. My life…everyone is threatened by [the nuclear wars],” Otto said.

Otto talked about the different bombings that happened through the years and how they affected Hiroshima, Japan. He also showed visuals of where the bombings took place.

Otto and Shenk spoke about how they met three men, one being a bomb survivor himself, who took them in and gave them resources.

“They took us to the gas station, which one of the guys had owned, and they started feeding us [different types of foods] just being so warm and hospitable. They knew we were Americans. Pretty soon, we found out that at least one of them was a survivor of the bombing of Nagasaki,” Shenk said.

In his mid-20s, Otto experienced the 1970s and 80s anti-nuclear weapons protests as people spoke out against the creation of more powerful bombs.

Otto gave details on the different bombings that happened throughout the years and projects like The Manhattan Project.

“The Manhattan Project” was the code name for an American project to create an atomic weapon during World War II.

Shenk spoke on the number of deaths of children, one being Kyoko Imori, and read the story of one of the victims, Kiyoko Komeyoshi, who was a child who was hurt by the bombings.

Toward the end, she gave a moment of silence for the victims killed by the bombs.

Shenk reflected on her time of traveling to Japan with her family at four years old. She went to kindergarten and elementary school in Japan, where she felt different from the others.

Shenk also shared a class photo from the 3rd grade, showing how she stood out from the other students.

“Our family was the first and only foreign family in town, so everyone knew us. The fact that decades later, when I saw this picture of myself from the 3rd grade, I was so shocked at how much I stood out because I felt like I was included, like I was part of the group,” Barbara Shenk said.