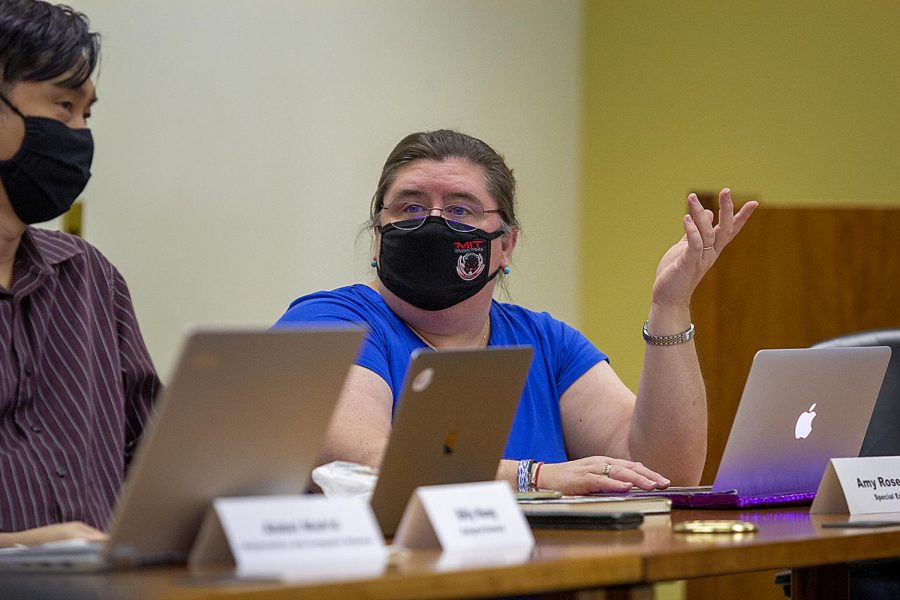 Amy Rosenstein, department of special education, asks a question about the textbook rental meeting staff at the Sept. 30, 2021 CAA meeting.

The council of academic affairs approved three new additions to the course offerings at Eastern on Thursday.

Marita Gronnvoll, council member and assistant chair of the communications department, said that she took ASL classes when she attended college and that she was curious how similar this course would be to those.

“One of the things that we were required to do was have certain number of hours per week embedded in deaf culture,” Rosenstein said. “I see deaf culture everywhere in here is you’re going to see that kind of embedded experience.”

Gronvoll said that while Charleston does not have the same kind of “embedded culture,” the ASL Club on campus or certain online experiences could be another option.

ASL is a required class in the communications disorders and sciences major and is a popular elective in majors like special education. Now, students will be able to take this class at Eastern, rather than having to transfer credits in from a different institution.

The council voted unanimously in favor of adding the course.

Julie Dietz, the chair of the public health department, spoke about this course to provide context and more explanation about cannabis itself.

“Among dispensaries, there is a vast, you know breadth of knowledge that is in some areas very limited and in other areas very great,” Dietz said.

Dietz said that the purpose of this course would be to fill in gaps in knowledge and make sure that medical professionals would fully understand what they’re prescribing to patients.

A lot of common knowledge about cannabis, including things like strains and their purposes, would need to be expanded upon and explained scientifically to be beneficial in the medical field.

Dietz said that terpenes are more important from that perspective as different compounds can help with anxiety relief, pain relief or recovery from narcotic addiction.

The class would also deal with the ethics and legality of medicating with cannabis as only some states in the U.S. have legalized the drug.

“The goal of this class, in the very end, is that each student can create a toolkit that can be used at a dispensary and to help to educate the employees and educate the public from a public health literacy standpoint,” Dietz said.

The addition of this course was approved unanimously.

The third course the council approved is titled “Health Disparities of Gender and Sexually Diverse Populations.”

The course is intended to educate students who are pursuing medical careers about the specific health challenges faced by members of the LGBTQ+ community, as well as the stigma and discrimination they may deal with when pursuing treatment.

Dietz also spoke about this course and the specific issues it would deal with.

“We often run into forms of discrimination but also the lack of access, whether it’s real or perceived, so there’s different issues that we need to look to and very specific health issues for individuals,” Dietz said.

Dietz listed hormone therapy for transgender patients and issues with domestic violence as topics that the class would cover.

The addition of this class was also unanimously approved.