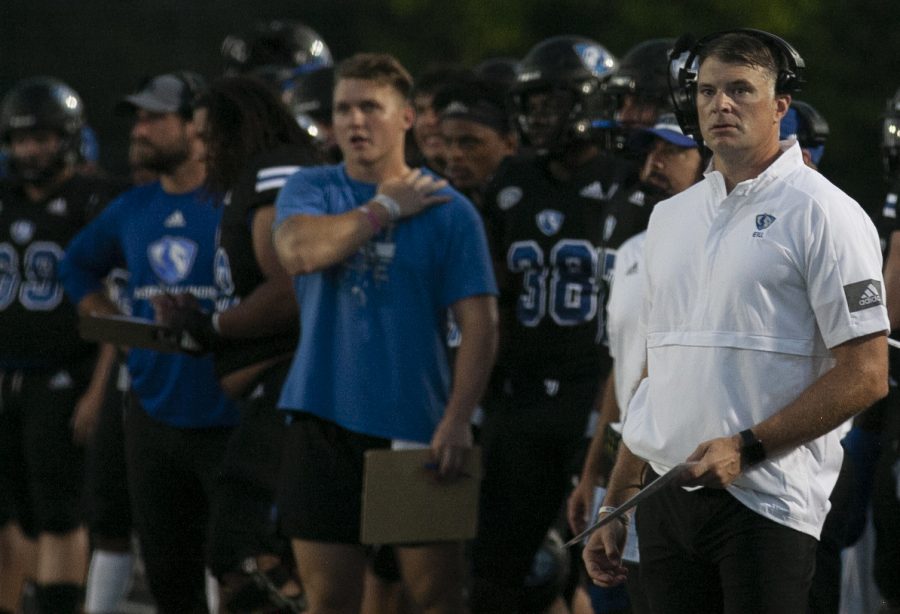 Eastern head coach Adam Cushing (right) watches his offense from the sidelines in a game against Illinois State on Sept. 18 at O'Brien Field. Eastern lost the game 31-24.

Week 4 of Play for the OVC not only marked the beginning of conference play for some teams, but one team walked away with a victory that they will never forget.

Last Saturday marked the first time in thirty-four years that Tennessee-Martin came out of JSU Stadium in Jacksonville, Alabama victorious over the Jacksonville State Gamecocks.  The win improved the Skyhawks to 3-1 on the season.

The Skyhawks pulled off a 35-31 over the No. 9 ranked Gamecocks in a triumphant fashion. The win marked the first nonconference road win over a top-15 team since defeating Chattanooga in 2017.

The Skyhawks fought for their lead over the Gamecocks in the fourth quarter after trailing by as many as 14 points. Skyhawk quarterback Keon Howard connected with wide receiver Zoe Roberts for the game-winning touchdown, sealing the victory.

Howard would finish the game passing for 255 yards with 3 touchdowns. He also went 40 yards on six carries, helping the Skyhawks out gain the Gamecocks 426-409.

Peyton Logan, who had a game-high of 67 yards, and Zak Wallace, who rushed for 63 yards, helped the Skyhawks gain 171 yards on the ground. Defensively, the Skyhawks were led by JaQuez Akins who ended the game with a team-high of seven tackles.

That same success was echoed throughout the conference as two other teams took home wins.

The first conference game of the season belonged to Eastern and Tennesse Tech, resulting in a 28-14 Panthers victory, their first of the season.

The Panthers, now 1-0 in the OVC and 1-4 overall, forced four turnovers last weekend at Tucker Stadium. The biggest turnover for the Panthers came halfway through the fourth quarter when safety Bryce Dewberry scooped up a loose ball and raced a school record 90-yards for the touchdown.

The school-record touchdown kept the Golden Eagles from scoring a game tying touchdown, leaving ample opportunities for Easterns’ defense to shine for the rest of the quarter.

Sophomore linebacker Jason Johnson led the defense with 16 tackles and now leads the OVC in tackles.

Defensive end Jordan Miles finished the game with four tackles, three of them being sacks. Following his performance at Tennessee Tech, Miles was named the OVC Defensive Player of the Week. He is now the first Eastern player in eighteen years to collect three or more sacks in a game.

The younger players led Easterns’ offense against the Golden Eagles. Freshman wide receiver DeAirious Smith finished the game with 6 catches for 109 yards. Quarterback Otto Kuhns was 15-of-26, passing for 183 yards with 2 touchdowns.

Their offense was led by freshman quarterback Drew Martin. Martin was 26-of-28, passing for 315 yards with 1 touchdown and 1 interception.

The Golden Eagles only rushed for a total of 64 yards with running back David Gist leading the way with 62 yards. Their defense was led by Nyquan Washington and Jack Warwick, both with 8 tackles apiece.

Southeast Missouri was one of the three teams that won in Week 4 after they took a 47-14 victory over Tennessee State. The Redhawks are now 1-0 in the OVC and 1-3 overall.

Redhawk Senior running back Geno Hess ran for a career-high of 205 yards and three touchdowns against the Tigers, making him the first Redhawk to rush over 200 yards in a game since 2018. The Redhawks outrushed the Tigers 380-14.

Redhawk kicker Kenny Doak accounted for 17 of the 47 points as he was a perfect 4-of-4 in field goals and 5-of-5 in extra points, setting a new career-high.

Junior quarterback CJ Ogbonna was 14-of-23 and threw for 227 yards and ran 48 yards, as well. Rashaan Plamer finished the game with 3 catches for 85 yards.

Defensively, the Redhawks were led by Bryce Norman and Dony’e Taylor who had six tackles apiece.

The Tigers offense had a total of 266 yards with quarterback Geremy Hickbottom throwing for 252 yards. Junior linebacker Jahsun Bryant led the Tigers’ defense with 14 tackles.

Austin Peay’s’ four-game win streak against FCS opponents came to an end when they fell 35-27 to Eastern Kentucky.

However, no positive gains were made on their final drive as quarterback Draylen Ellis threw an interception with 47 seconds remaining, sealing the win for the Colonels.

The Governors outgained Eastern Kentucky 400-268 as a result of a 91-54 advantage in play count. Ellis was 27-of-55 and passed for 298 yards, 1 touchdown and 3 interceptions. Wide receiver Baniko Harley had 9 catches for 136 yards.

More conference play for the OVC will begin on Oct. 2.