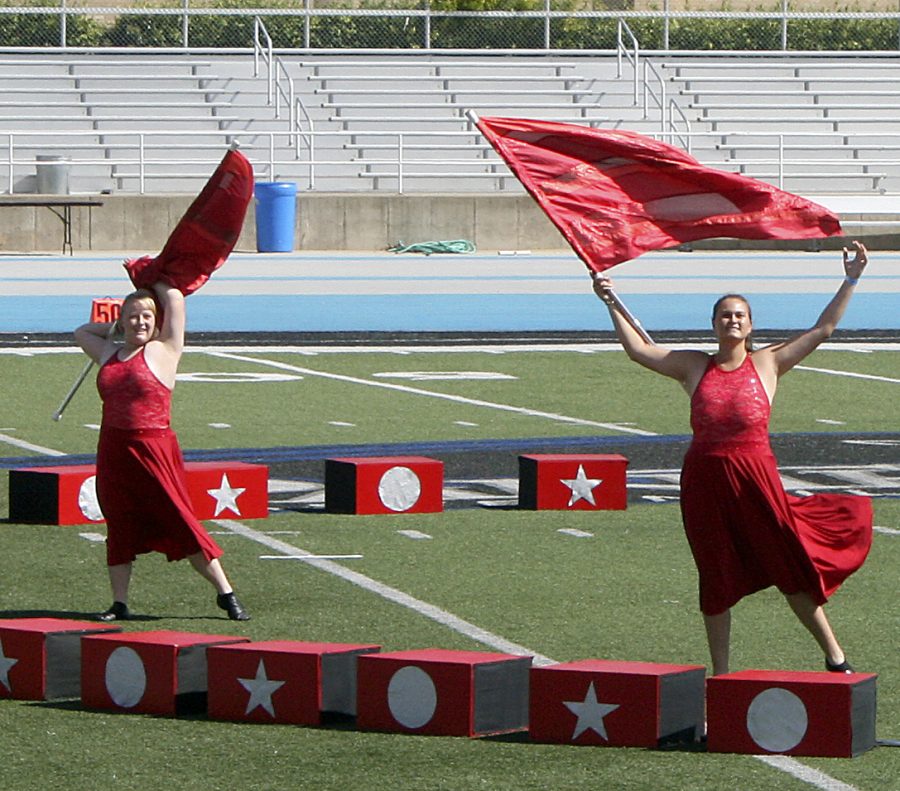 Instruments shone in the sunlight, flags rippled in the wind and music filled the stadium during the Panther Marching Band Festival on Saturday.

High school bands from around central Illinois entered the competition to perform shows they may have been working on for months, with themes ranging from “Romeo and Juliet” to “xMachina.”

Each band featured brass, woodwind, and percussion sections with a color guard to add to the visual performance. Many also had pit orchestras at the front of the field which were made up of instruments that either had to be connected to an amplifier or were just too big to march with.

Drum majors climbed podiums to be visible by the entire band as they directed them and kept them on the right rhythm.

Judges observed and offered critiques and scores for each aspect of the performances.

The bands marched and created different formations on the field which correlated to their music and theme; one of the biggest challenges of marching in a band is focusing on being in the right place while still sounding good.

Some bands did more than march, though.

The Ridgeview High School Marching Mustangs were a smaller band, and thus fell into the 1A category. Their theme was “Tomorrow is a New Day.”

Those flags were replaced by darker ones as the band transitioned to “Shadow of the Day.”

The final song, representing the end of the daily cycle, was “Dancing in the Moonlight.”

The arrangement allowed each section to take a break from playing and be featured in an enthusiastic dance break; the last section, percussion, even twerked to laughter and cheers from the audience.

Band size can affect the challenges of a performance, so they’re divided into sections depending on band size. Bigger bands like the Newton High School Marching Eagles and the Granite City High School Marching Warriors were placed into the 4A, 5A and 6A divisions to keep the playing field level.

Smaller bands from places like Oblong High School or Ridgeview High School were placed in the 1A category.

Members of Eastern’s Panther Marching Band were the main staff of the festival. They prepared for at least a few weeks in advance to make sure things ran as smoothly as possible.

As a section leader in PMB, Cox helps to guide the alto saxophone section as they learn their music and marching. Section leaders make sure that no individual in the band will be overlooked and each will be at their best.

Cox said that she was happy to be back after band activities were limited last year due to COVID-19.

“After having a season of no marching band performances on the football field, it was extremely exciting to be back,” Cox said. “We are able to make more memories and grow together as musicians and people. The festival was an awesome environment to be a part of.”

While section leaders do most of the individual interactions, drum majors oversee the entire band in many ways.

Of course, the band director is in charge of picking music, planning shows and teaching the band, but drum majors are the ones who actually conduct the band as they march on the field.

Katie Smith, a senior music education major and Eastern’s current drum major, said that she coordinated a lot of logistics for the PMB festival. She also had to be available throughout the day to answer any questions that came up from the band.

Smith said that the variety of different shows on the field this year stood out to her.

“Seeing the diversity of performances throughout the day was fascinating because of the different props and technology used,” Smith said. “Each band was unique in how they used the additional elements of their show and one band [the Granite City High School Marching Warriors] even had a robot on the field!”

PMB members have a fairly busy schedule each week; they practice Monday, Wednesday and Friday from 4-6 p.m., with additional practices and several performances on weekends when the football team is playing.

Soon, the band will be working on learning a Billy Joel themed show which they will be performing at a Panther football game at the University of Tennessee-Martin on Oct. 16.