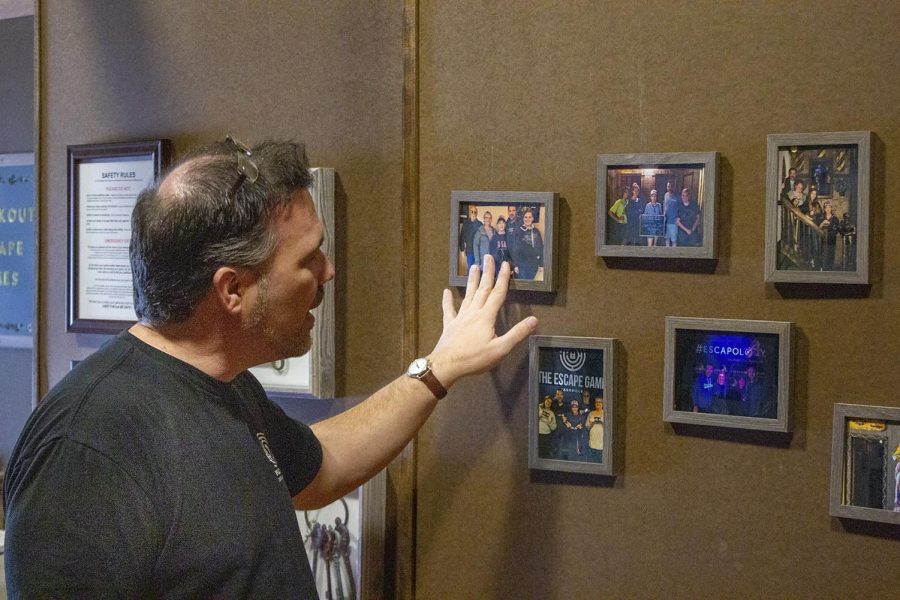 Doug West, owner of Breakout Escape Games has photos of other escape rooms he has particpated in on display at his escape room.

A world of puzzles and challenges exists just a two-minute walk away from Old Main at 1505 7th St.

They just officially opened for business in June of this year after a two-year process of building their two escape rooms and then waiting for COVID-19 restrictions to lift.

After a bad experience with their first ever time playing an escape room, a conversation three years later with escape room owners about how they started with “$10,000 and a dream” in Champaign led to an epiphany from West, which then kickstarted the beginning of what would become Breakout Escape Games.

“I got home that night and I thought, ‘well I have $10,000 and a dream,’ so I did some research that summer and talked to [McQuality] about it and my mother was an investor, and just decided, ‘we’re going to try this,’ and that was in October of 2019,” West said.

While COVID-19 put a significant damper on their plans to open in March 2020, West and McQuality are optimistic about their business so far.

“It’s been definitely a roller coaster process because, you know, it’s very disheartening to invest so much time and money into something and then just watch it sit there while the world figures out what it’s going to do,” West said. “But we’re excited to be here now, and we’ve been, for a new business, we’ve been busier than what I expected.”

Although the reappropriated church wasn’t their first choice after the spot they had set their sights on was sold, its open floor plan and proximity to Eastern turned out to be a good fit, especially in the eyes of McQuality.

“I liked very little about it, except for the fact that it was cheaper,” West said. “They cut the rate quite a bit because I think they genuinely felt bad for us. And (McQuality) loved it. She loved it, I didn’t. I was wrong, she was right, which I say a lot these days.”

West noted the importance of new customers, given that the appeal of escape rooms is their novelty and first-time charm.

“When you get outside of the main strip, it’s a small town,” West said. “(But) even when I lived here, there’s always a lot of activity going on. And with the college having about 2,200 new students every year with the incoming freshman I thought ‘you know, that’s 2,200 potential new customers every year. The thing with escape room is, it’s much like a movie. Once you’ve seen it once, it’s not likely you’re going to go back and see it again.”

The building features two games, one where the players are attempting to pull off an elaborate heist and the other where they must escape from jail before the sheriff arrives. Even though the games operate on a time limit of one hour, West says he prefers to let customers finish the game they paid to play.

“You’re here to pay for a game, and you want to finish that game. So, if it takes more than 60 minutes, we don’t care,” West said. “Most people don’t even need the 60 minutes. In fact, we’re adapting some of the rooms to make them a little more challenging because I don’t think they’re quite challenging enough.”

The challenges exist not only in playing the games but also in creating them, West said, noting the work that goes into making one’s passion come to fruition.

“I wouldn’t recommend anyone doing this if you’re not enthusiasts because it’s a lot of hard work, there’s a lot of headaches, a lot of frustration,” West said. “So don’t just do it for the money because there’s a lot of work into it, but we love playing them, so it was just as exciting building them too.”