Latinx students to share their culture, what it means 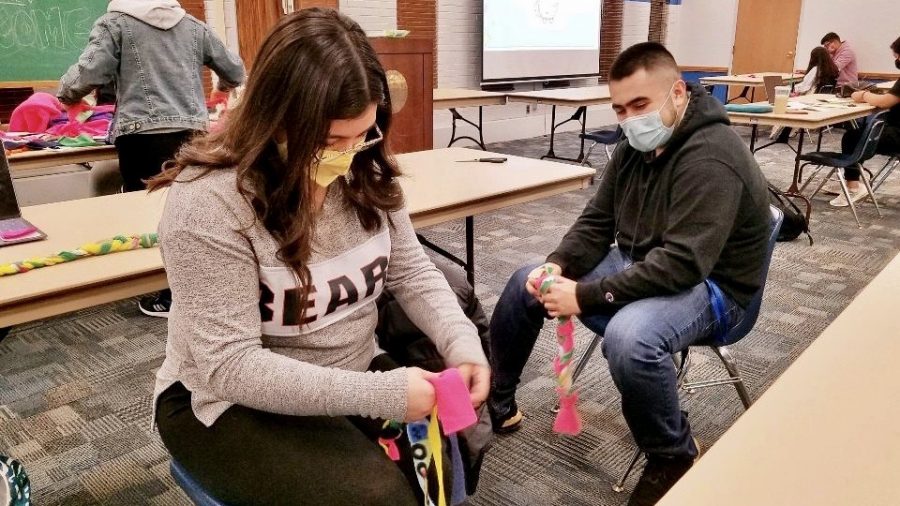 Kristal Muñoz and Angel Enriquez make dog toys during LASO Volunteer Event on Feb. 26, 2021 at the Martin Luther King Jr. University Union. Every year LASO has a volunteer event where they make dog toys for “pups in need” and write letters to future Latinx Panthers.

As Latino Heritage Month continues, five students are preparing to be on a panel to talk about their experiences as Latinx students on a panel from 6 p.m. to 7 p.m. in the Arcola-Tuscola rooms in the Martin Luther King Jr. University Union.

Rogel, a senior Spanish major, said she thinks people should attend the event to get a better understanding on what life is like for some of Eastern’s Latinx students.

Watson, a sophomore Spanish major with teacher licensure, said he thinks people will benefit from learning about the difference in Latinx cultures.

“I think it is important for people to come to this because they’ll be able to hear first-hand experiences from students. I would hope that new Latinos/as/x on campus attend as well so they can see/hear from us, who have been on campus for a little while now. I also think it is important for non-Latinos to attend to get a feel for how a different group of people feel on EIU’s campus. It’s important that people also come to see the diversity of Latinos,” Watson said. “I am Jamaican and Mexican, and few can identify with that. So, it’s amazing to see the different backgrounds of Latinos on campus.”

Yusef, a junior English and philosophy double major, said she hopes to share more about her experiences and learn from others.

“I am hoping to talk about what being on campus has been like for me and to answer any questions people may have. I think it is important for people to attend this event because it offers the audience an ability to listen to the experiences and perspectives of the panelists and share their own,” Yusef said.

Rogel said she hopes to share how she found her place at Eastern.

“During the panel, I would like to speak about my first year while attending Eastern because I feel like that is when I experienced the worst case of imposter syndrome. At some point, I questioned my education and compared it to the rest of my peers, especially since I came from the south side of Chicago and attended a Chicago public school. To add on, I was the only one from Thomas Kelly High School who came to Eastern, and I was left with a state of culture shock for a while but managed to bring home with me to Charleston,” Rogel said. “Overall, I would like to speak about my college journey since I managed to balance myself as a full-time student, part time worker, an APSI member, an older sister and most importantly my personal life.”

Munoz, a sophomore criminology and biology double major, said she also hopes to share her experience coming to Eastern.

“I am hoping to talk about my experience here at Eastern Illinois, a predominantly white institution. There are so many opportunities here that aren’t always made aware to students. Coming from a big city to a significantly smaller town, I hope my story of the culture shock, transitioning and adapting brings comfort to those who still are struggling there.”

“I think this panel should be something that people leave feeling good. Good about who they are, good about the school they chose, and good about how they identify. Even if they aren’t Latino, they can see how we as a people feel on EIU’s campus,” Watson said. “And for me, I feel supported and accepted as a Latino on EIU’s campus.”

Munoz said attendees should expect to leave feeling as though they have a space on campus.

“People should expect to learn more about the student life here in campus, not only as members of the Latinx community but just as students. I want to make sure my message of there always being a place or a community for students where they feel like they fit in is conveyed through this panel. I truly believe that LASO creates a safe and welcoming environment whether one is a part of the Latinx community or not,” Munoz said.

Panelists also shared what being Latinx means to them:

“Being a latinx person means bringing representation of the people from the past, present, and future. I am proud to be a daughter of immigrants from Mexico who crossed the border for a better life. I acknowledge my ancestral roots and continue to live upon the traditions I grew up with,” Rogel said. “As I continue to study my minor of Latin American studies, I continue to discover myself even more and the people before me.”
“I identify as a Latino. Being Latino to me, means having roots from a country in Latin America. My roots being mexicanas. It means being orgulloso (proud) about who you are and where you come from. It’s about embracing your culture and loving every second of it. It’s about feeling like you are making your family and ancestors proud,” Watson said. “And no, to identify as Latino you do not have to speak Spanish. It’s about so much more than the language you speak.”

“I am so proud to be Latina. To me, being a part of the Latinx community is so comforting because we all have shared experiences and upbringings. We bond over cultural similarities and grow by respecting and appreciating our differences,” Yusef said. “I think being a Latinx person means just that.”