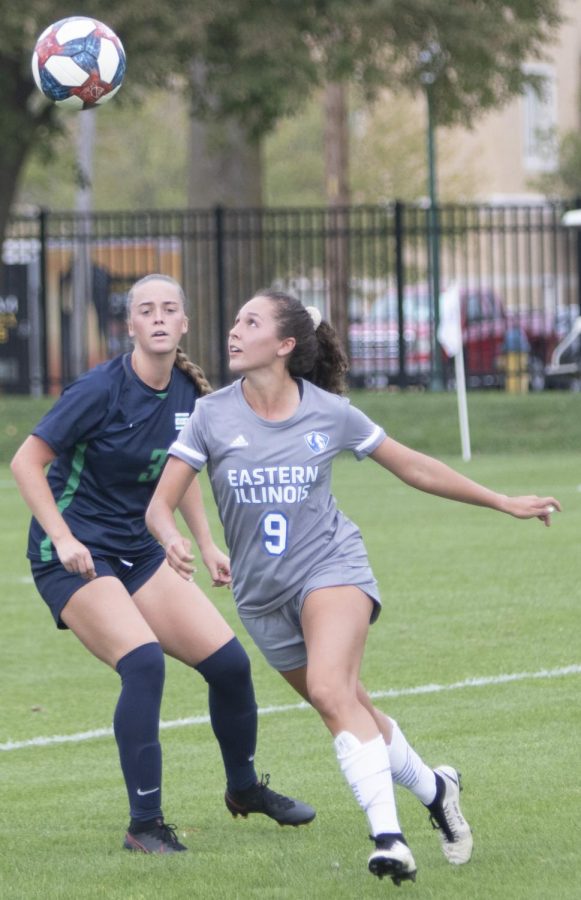 Eastern forward Serra Pizaro gets in position to field the ball in a match against Chicago State on Sept. 3 at Lakeside Field. Pizano had the lone goal in the match, which Eastern won 1-0.

The Panthers have shown promise the first half of this season. They’ve already scored the same number of goals they did last year in less games, including a three-goal victory back in August. Heading into conference play, though, Eastern has lost three straight and have been shut out on those occasions.

While Eastern has shown they can be a very competitive team, they enter conference play with the second worst record in the conference (2-5-1). Heading into the weekend, the conference is led by Murray State with a 5-3 record, followed closely by UT Martin at 4-3-1. At the bottom, just below Eastern, is Tennessee Tech with a 1-3-1 record.

Eastern has offensively not had quite the same numbers as Murray State but have improved their offensive averages since last season. While Eastern ranks near the bottom of the conference in goals, they are middle of the pack in terms of assist (5), which is a testament to the offensive creativity the team possesses. With all of Eastern’s goals coming off of assists, it proves that the offense is capable of setting up quality opportunities with a variety of passers to initiate play.

Eastern co-leads the saves category so far with Southeast Missouri (48), with Faith Davies putting on impressive performances this season. Davies has managed three shut outs in eight of Eastern’s matches. This helps Eastern as they are statistically struggling defensively compared to their OVC counterparts.

Eastern has allowed teams to score 17 goals on them, which is the highest amount in the conference. That means for every goal Eastern has scored, their opponents are scoring on average over three. While they have defensively been promising in a multitude of matches, they’ve received two 5-0 shut outs this season, plus two matches where they allowed three goals.

Defensively speaking, the most impressive statistical team would be UT Martin. They are second in goals allowed (9), but they are currently allowing the least goals allowed per game (1.09). Considering that they are second in goals and assists to Murray State, while also proving to be a better defensive team, UT Martin looks to be one of the most competitive all-around teams in the OVC.

While Murray State has the prolific offense, and UT Martin has a well-balanced team, Eastern is no push-over heading into conference play. Having scored more goals in less games compared to last season, they are offensively looking better. Not to mention, if you eliminate those two 5-0 shut outs they suffered against Wisconsin and Cincinnati, their goals-against total would only be at seven.

With OVC conference play beginning soon, Eastern will be looking to be in their best form all year. They’ve had all season to grow their skills, assess their strengths and weaknesses, and develop chemistry. Regardless of the record at the end of the regular season, Eastern will be a competitive match up for any of their opponents in conference play.

Eastern officially kicks off conference play against Morehead State on Sunday, September 26th in Charleston. Eastern will be looking to get their first win in conference and get back to winning form.