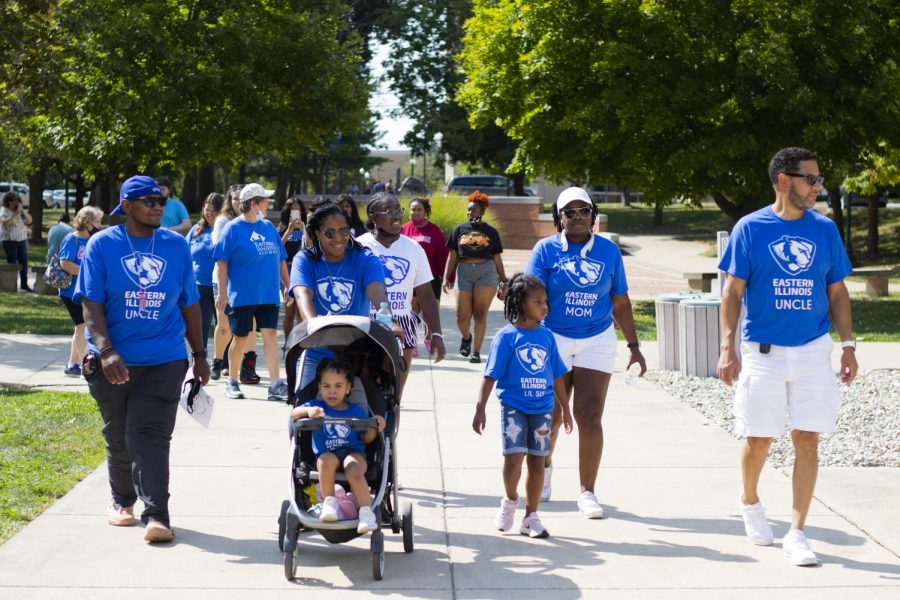 Family members of Eastern students were invited to participate in events, providing them with the opportunity to explore the campus, get to know the community and spend quality time together.

One event that was hosted by the Residence Hall Association was Carnival Fun and Games in the South Quad. Families participated in skee-ball, the bounce house, a dunk tank and more.

Serena Voss, a sophomore psychology student, is the secretary of RHA.

“The purpose of this event is to get families involved in their carnival theme,” Voss said.

The Coffey family traveled from the Danville area to come down for the weekend. They have a daughter who is attending Eastern, Emily Coffey, a senior elementary education student.

Chad and Amy Coffey are Emily’s parents. They said that the family has attended Family Weekend for the past three years.

“Our first year when we attended the family weekend, they had the bingo game. We had so much fun,” Chad Coffey said.

Around that time there were thousands of people who came out to the bingo game.

“Bingo is the event my family and I look forward to attending every year,” Chad Coffey said.

“Family weekend is the perfect opportunity to visit and spend time with our daughter,” Amy Coffey said.

The Nelson family traveled from the west-suburbs of Chicago for Family Weekend.

LaVarik Nelson is the father of LaVarik Nelson Jr., a freshman broadcast journalism student. He said he is looking forward to enjoying the family weekend. He also said he thinks Eastern is just right for his son and he liked the atmosphere here.

The Wittkamper family came down for family weekend to see their son, John Wittkamper, a freshman business student.

Joe Wittkamper, John’s father, said he did not know what to expect for their weekend, but he and his family planned to partake in the weekend events while expecting good things to come out of it.

Randee McGee and her family traveled from the East St. Louis area to see Kaleigh Miller, a junior sports management student. They said they have been coming to Family Weekend for the past 2 years.

“We had fun last time we went. But that time the speakers busted last two years ago and they had to do it by mouth and it was quite interesting. Hopefully that doesn’t happen this year,” McGee said.

The Waigand family traveled from the Northern part of Illinois for Family Weekend to spend time with their son, Payton Waigand, a freshman majoring in career and technical education.

Bob Waigand said when they came for the campus tour in January, they did not get to view the social aspect on campus due to COVID-19.

“I’m very curious to see the social life and the atmosphere at EIU this weekend,” said Bob Waigand.

The Hernandez family came down to visit their daughter Isabella Guidry, a freshman education student, for family weekend. They said they were looking forward to the bingo event too.

“We are looking forward to bingo because my family loves to play. And then it’s so cute how the theme is glow in the dark,” Elivia Hernandez, Isabella’s mother, said.

The Budz family came from the Chicagoland area for their second year attending family weekend. Charles Budz and Leigh Drewniak are the parents of Kierstyn Budz, a junior elementary student.

“We won a flamingo inflatable and a Fitbit last time,” Drewniak added.

Drewniak also said she was happy being back and seeing other family’s faces and gatherings.

“I am looking forward to spending time with my daughter to be with her and enjoying her,” Millie Jackson said.