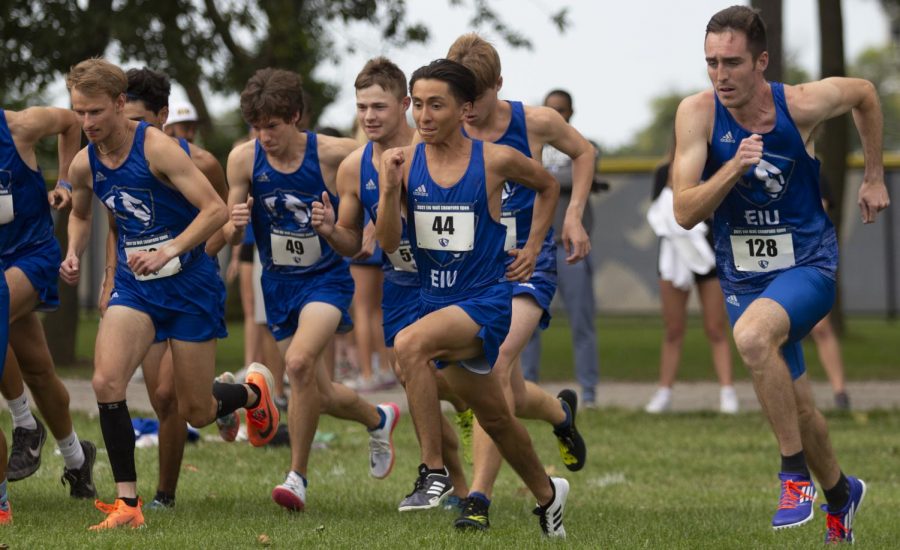 The Eastern men's cross country team races from the starting line to begin the EIU Walt Crawford Open at the Tom Woodall Panther Trail on Sept. 3. Both the men's and women's team placed first in the open.

The Eastern cross country teams competed in their second meet of the season Saturday in Terre Haute.

For the men, redshirt senior Dustin Hatfield earned a first-place finish overall with a time of 24:22.7, beating Purdue’s Curtis Eckstein by a second and a half.

Purdue won the meet with 36 points while Eastern tied with Indiana for second place with 55 points each.

Eastern had an top-5 average time of 25:09, two seconds faster than Indiana, but the Hoosier had three runners in the top 10 while Eastern had two.

Rounding out the top five for Eastern were Jaime Marcos in seventh place, Andrew Pilat in 12th, Will Bullock in 17th and Francesco Romano in 18th.

For the women’s team, Lindsey Carlson placed first overall for the second-straight meet to begin her cross country career.

Carlson finished with a time of 17:37.8, five seconds ahead of the second-place runner.

The Panthers finished in fourth place, however, with no other Eastern runners finishing in the top 10. The closest runner to Carlson was Kate Bushue, who finished 16th.

The rest of the top 5 for Eastern was Avani Flanagan at 24th, Katie Springer at 29th and Alex Gomez at 46th.

Purdue ran away with the competition, with their top five finishers all finishing in the top eight overall. As a team, they had 24 points while second-place Indiana had 49.

Both the men’s and women’s teams will be back in action on Oct. 2 at the Louisville Cross Country Classic.