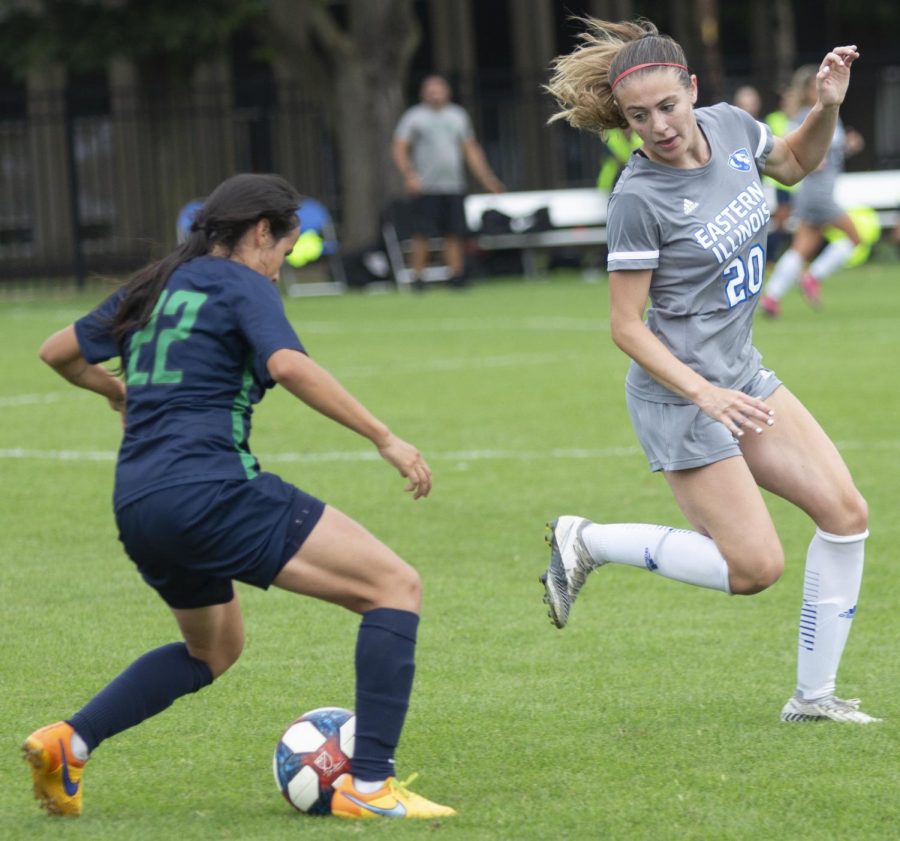 Eastern defender Morgan Rinker positions herself in front of a Chicago State player in a 1-0 Eastern win on Sept. 3 at Lakeside Field.

There is a little over a week until conference play begins for the women’s soccer teams of the OVC.

Only two of the conference’s nine teams, Tennessee-Martin and Murray State, are over .500 in nonconference play. Southern Illinois-Edwardsville is .500 on the season and the rest of the OVC is below that mark.

Every team except Belmont has one more match before conference competition begins and the standings truly start to take shape.

As things stand now, Tennessee-Martin is pacing the conference with an early record of 4-2-1. The Skyhawks lost their last match against Western Carolina 2-0, snapping a three-match winning streak.

Murray State, last season’s conference champion, is right behind Tennessee-Martin with a record of 4-3.

The Racers started the season 4-1 and have lost their last two matches against Indiana and Kentucky.

Southern Illinois-Edwardsville and Austin Peay are the two hottest teams in the conference, both having won their last two matches.

The Cougars are 3-3 on the season and are coming off wins against Southern Illinois and Evansville.

The Governors lost their first four matches of the season and have gone 3-0-1 since. Their two most recent wins came against North Alabama and Alabama A&M.

Belmont is 3-4 on the season. The Bruins started 1-3 and have now won two of their last three matches.

Eastern has lost its last two matches by scores of 5-0 and 1-0 to make its record 2-4-1 so far. The Panthers have a road match against De Paul Sept. 18 before beginning conference play at home.

Morehead State won its opener and then went winless over its next five matches. The Eagles snapped that streak with a win on Sept. 10 and since lost to Miami-Ohio.

Southeast Missouri has lost four in a row, being outscored 10-0 during that span. The Redhawks are now 2-5.

Tennessee Tech has played just four matches, the fewest in the conference, and is 1-3 so far.

Their lone win was a 1-0 victory over Liberty in their second match.

Murray State unsurprisingly leads the conference in goals with 15, while Tennessee-Martin has allowed an OVC-low 5 goals this season.

Tennessee Tech’s 1 goal is the lowest in the conference while Southeast Missouri has allowed a conference-high 15.