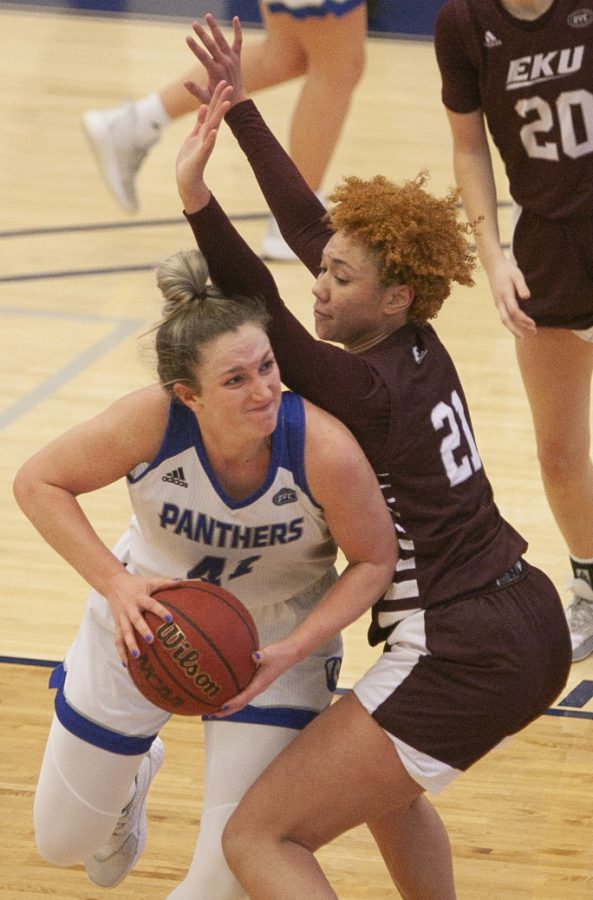 Eastern forward Abby Wahl pushes through a defender in a game against Eastern Kentucky on Jan. 16.

Both the men’s and women’s basketball teams have had their 2021-22 schedules revealed, with both teams set to begin in less than two months.

As the teams continue preparations for the upcoming season, let’s take a look at some of the top returning players for each.

Perhaps the best word to describe the current situation for the men’s basketball team is “transitional.”

A new head coach, Marty Simmons, will be leading the program this season and his roster is full of newcomers.

Six players from last year’s roster are back, including three that played significant minutes.

His field goal percentage of 60 percent ranked second on the team last season and is also the highest among returners.

Redshirt senior guard Kashawn Charles is the longest-tenured Panther by quite some time. All of the other returners have just one season at Eastern under their belts, but Charles has been with the team since the 2018-19 season after transferring from Labette Community College.

Redshirt freshman guard Henry Abraham played 23 minutes per game last season, the most among returning players. He averaged 5.5 points per game and his 34 assists ranked fourth on the team.

A 3,000-point scorer in high school, Abraham made 32 three-pointers last season, the third-most on the team behind Charles and guard Mack Smith.

The women’s basketball team will be attempting to make the OVC Tournament for the third-straight season in 2021-22.

Three of their top performers from last season, including their top-two scorers, will be back on the court.

The Panthers’ leading scorer last season was junior forward Abby Wahl. She averaged 14.5 points per game and also led the team with 7.4 rebounds per game, both of which ranked fifth in the OVC.
Wahl was named first-team All-OVC after last season, the first time in her career she received All-Conference honors.

Wahl has improved each season at Eastern. She averaged 6.3 points per game as a freshman and 11.8 as a sophomore before earning her top-five position last season.

Guard Lariah Washington will be entering her third season with the Panthers and has already been given All-OVC honors twice.

She was first-team All-OVC as a freshman, in addition to being OVC Freshman of the Year, and was given second-team honors last season.

Also back is point guard Kira Arthofer, who led the conference in assists per game last season (4.5).

Arthofer also tied for third in the OVC with 2 steals per game and increased her scoring average from 3 points per game as a freshman, to 3.5 as a sophomore and 6.7 last season.