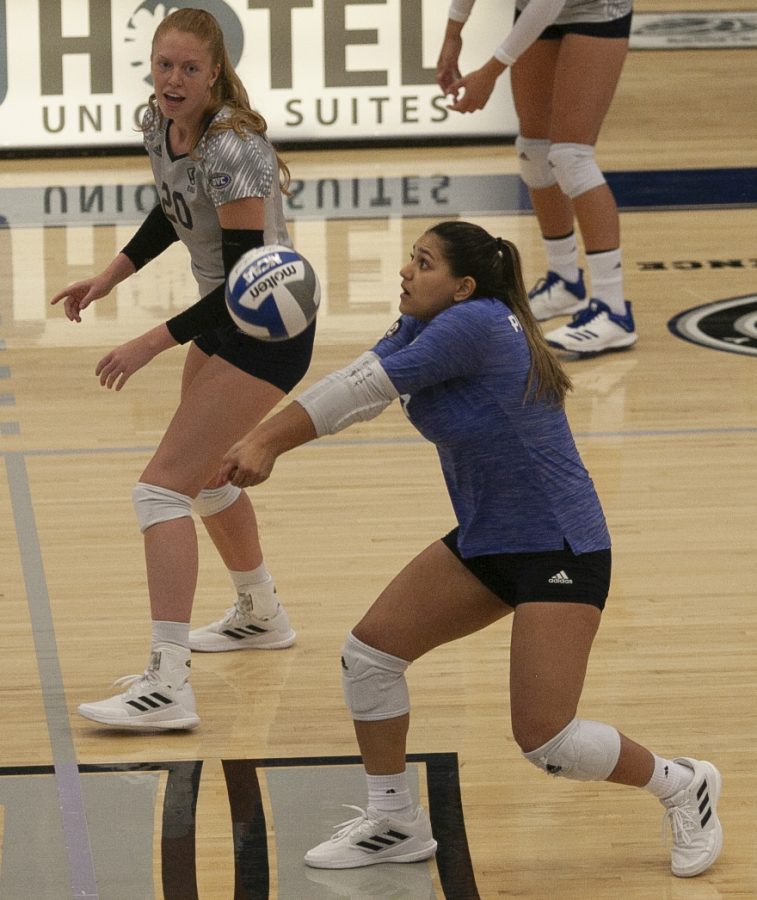 Eastern libero Christina Martinez Mundo receives a serve in a match against Northern Illinois on Sept. 2 in Lantz Arena. Mundo had 26 digs in the match, which Eastern won 3-1.

After back-to-back last place finishes in the OVC, the Eastern volleyball team finds itself right at the top of the standings as conference play nears.

With a record of 7-1 in nonconference competition, the Panthers moved into first place in the OVC Wednesday with Tennessee State’s loss to Evansville.

Eastern has been blocked less frequently than any other OVC team, just 1.18 times per set.

Tennessee State is now in second place with a record of 5-1. The Tigers still lead the conference in hitting percentage (.258) and rank second in kills per set (14.65). They also lead the OVC in blocks per set, averaging 2.53.

Southeast Missouri is in third place with its 6-3 record. The Redhawks rank third in the OVC with 12.82 kills per set. They have also performed well defensively.

Southeast Missouri leads the conference with 18.92 kills per set and their opponent hitting percentage of .146 ranks second.

Murray State and Tennessee Tech are both 5-3 on the season. Murray State has played well on the attack, with its hitting percentage of .231 ranking second in the OVC and kills per set 15.29 leading the conference.

Tennessee Tech is in the middle of the conference in many statistical categories except service aces, where they rank second.

Sixth place is occupied by Austin Peay, which at 5-4 is the last OVC team with a winning record.

Morehead State, last season’s OVC champions, find themselves in the bottom half of the standings in nonconference play. The Eagles are 3-5 so far.

Belmont finds itself in eighth place with a 2-5 record. The Bruins have dropped five matches in a row after a 2-0 start to the season.

They rank fifth in the conference in hitting percentage (.198) and fourth in digs per set (15.48)

Southern Illinois-Edwardsville and Tennessee-Martin occupy the last two spots in the standings.

Tennessee-Martin has a record of 1-8 and is last in the OVC in hitting percentage (.123) and are allowing their opponents to hit a whopping .315 so far this season. They are also allowing 16.20 kills per set.

Conference play is scheduled to get underway next week, with Tennessee State and Belmont playing Sept. 21.