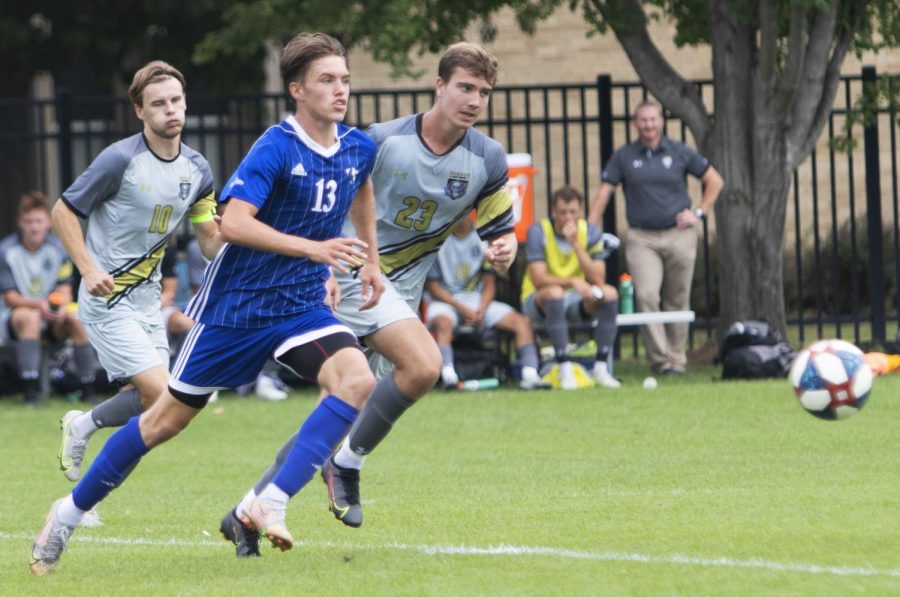 The Eastern men’s soccer team is one of three Summit League teams still searching for their first wins this season.

Among the Summit League teams, St. Thomas has allowed the most goals (13) while Western Illinois is the only team that has not yet scored a goal.

Leading the standings is Oral Roberts at 5-1. They are one of just two teams in the conference with a record over .500.

The Golden Eagles are leading the conference in goals with 9 and have allowed 5 goals, the second fewest in the Summit League.

Only three players have scored multiple goals this season, and two of them are on Oral Roberts. Dante Brigida leads the conference with 4 goals and Reed Berry is tied for second with 2 goals.

The Pioneers have scored 5 goals and allowed 5 goals this season. Stefan DeLeone and Aidan O’Toole are tied for fifth in the Summit League with 9 shots so far this season while Lukas Fisher is tied for the conference lead with 2 assists.

Kansas City and Omaha both have records of 1-3-1 this season.

Omaha has allowed the fewest goals in the conference (4), but have only scored twice on offense, leading to their losing record.

Kansas City has been doubled up by its opponents, allowing 10 goals while scoring 5.

The Roos’ defense has kept goalkeeper Cooper Clark busy. He has faced 14 more shots than any other Summit League goalie and thus leads the conference with 25 saves. His save percentage is solid, ranking fourth at .714, but his 10 goals allowed still lead the conference.

Eastern has the most favorable scoring margin of the three winless teams at -1.75 goals per game. The Panthers have scored twice this season, once each in their last two matches, and have allowed 9 goals.

They held their first lead of the season in their most recent match against Bellarmine, but a pair of late goals from the Knights handed Eastern its fourth-straight loss to open the season.

St. Thomas is struggling in its first season as a Division I program. The Tommies have allowed 13 goals, 3 more than any other team, while scoring just 2.

All the Summit League teams have limited nonconference matches left on the schedule with conference play beginning on Sept. 25.