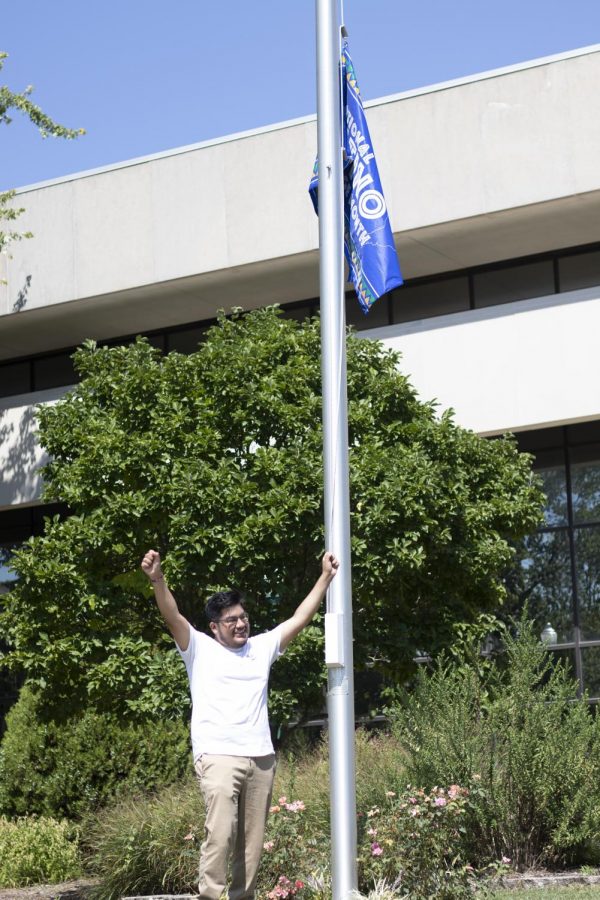 Luis Paniagua, a senior graphic design major, and the recruitment chair and secretary for Alpha Psi Lambda, shows his excitement after raising the Latino Heritage Flag.

Latino Heritage Month will kick off Wednesday in the Library Quad from noon to 1:30 p.m.

The mid-month start to the celebration is because of the anniversaries of independence for many Latin American countries falls on or close to Sept. 15.

“The ​Latino Heritage Month is a celebration of all of the Latin countries, not just Mexico but also South American. In the month of September over many countries celebrate their Independence. To put it in perspective, it’s like the Fourth of July for America, it’s a big deal, a huge celebration. However, ten times more because it’s multiple countries.”

Kristin Routt, professor of Spanish, said there is value in recognizing Latinx culture for Latinx students and non-Latinx students.

“Latinx students benefit from seeing their cultures and backgrounds celebrated.  Eastern as an institution needs to tell Latinx students that the broader campus community “sees” them and values them.  The broader campus community also benefits from participating in something beyond their familiar experience.  That is why we go to college–to understand our place in the world beyond what we grew up in.”

Seven events and one conference are planned for the monthlong celebration.

The next event planned for LHM will be held on Sept. 17 from 5 p.m. to 6 p.m., a field day will take place at the campus pond, in which multiple Latino organizations will be bringing games for attendees to take part in.

For those who cannot attend the kick-off or other LHM events, Gonzalez recommends taking time to self-educate.

​“One way to honor LHM is learning, doing your own research and engaging in conversation. Being open to learn about Latino Heritage and what makes each country unique.”

Gonzalez said she feels it is important to celebrate her heritage and culture, but also it is also important to “bring awareness and share the meaning of Latino Heritage.”

Routt said as an individual who identifies as non-Latinx, she also recommends self-education.

“I encourage people to get more informed about Latinx and Latin American immigrant communities in our country.  Read about how U.S. foreign policy has contributed to push Latin Americans out of their countries and into the U.S.  Explore the diversity of Latinx cultures in the U.S.–the Washington Heights of Lin Manuel Miranda, for example, is different from the Villita and Pilsen of Chicago, though they are equally fabulous!  Also, remember that Latinx people are “Americans” who belong here, not foreigners.  Correct yourself when you catch yourself associating speaking Spanish or just being brown or indigenous with non-citizenship.  Spend time cultivating a relationship with someone from another background to increase your comfort level with difference.  That is the best way for someone like me to spend Latino Heritage Month….but please do come to our events!”