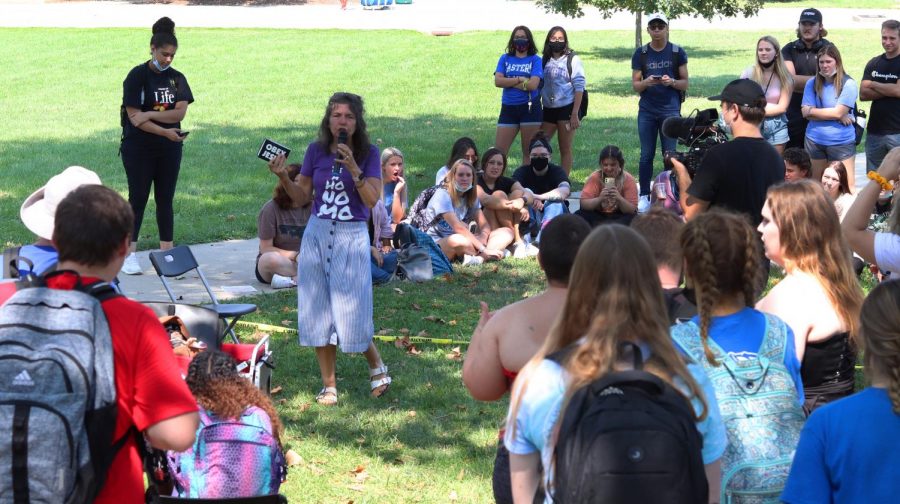 Sister Cindy preaches and tells stories about her life to students listening in library quad in front of the Mellin steps.

Brother Jed Smock and Sister Cindy Smock, both members of the Campus Ministry USA, sat in the campus designated free speech zone Monday at the center of some caution tape on the Library Quad.

With Sister Cindy’s recent TikTok fame more and more students gather to antagonize the “famous” evangelical, but many of the students at Eastern were there for the opposite reason.

Sharifa Etoe, junior TV and video production major and Vice President of Eastern’s Young Democratic Socialists of America, said that their organization wants to turn the attention from the Smocks and use their publicity for something proactive in the community.

Part of Sister Cindy’s rhetoric is “good old-fashioned slut-shaming.” Etoe and YDSA want to pledge that whenever Brother Jed and Sister Cindy are on campus that YDSA will either fundraise for their organization or give out free STD testing to students on campus. Etoe hopes to de-gender STD testing and make it free for the students.

YDSA is a sex-positive organization and is seeking social change that extends democracy into all aspects of life.

Maddin Herberger, a senior sociology major, said he came out to the quad for entertainment and that he had nothing else to do.

“I don’t believe anything that they’re saying. I’m just here for the homophobia and transphobia,” said Herberger, who was wearing a transgender pride flag as a cape.

Many students wanted to come and make fun of the Smocks and what they were doing on campus. Sister Cindy, who was wearing one of the “Ho No Mo” shirts that she sells as merchandise, had a line of students waiting to get a picture with her. One student even stopped her on the way back from the bathroom to get a selfie.

Reporters from Vice, a digital media and broadcasting company, were also there working on a series about internet personalities but declined to comment.

University President David Glassman, who observed the gathering for a while, said he was pleased that students were ignoring and walking past the Smocks’ group.

“Everybody is behaving very civilly and respectfully and that’s what I like to see in a free speech zone,” said Glassman.

Dr. Anne Flaherty, Vice President for Student Affairs said the free speech zone signs were put together by Dr. Heather Webb, Director of Student Accountability and Support. The signs were placed in the Library Quad Monday before the Smocks gathered.

“We ensure that everybody knows even if you don’t agree with what a guest has to say, I mean it is a free speech zone and they have a right to speak as long as they stay within our guidelines of our free speech zone,” Flaherty said.