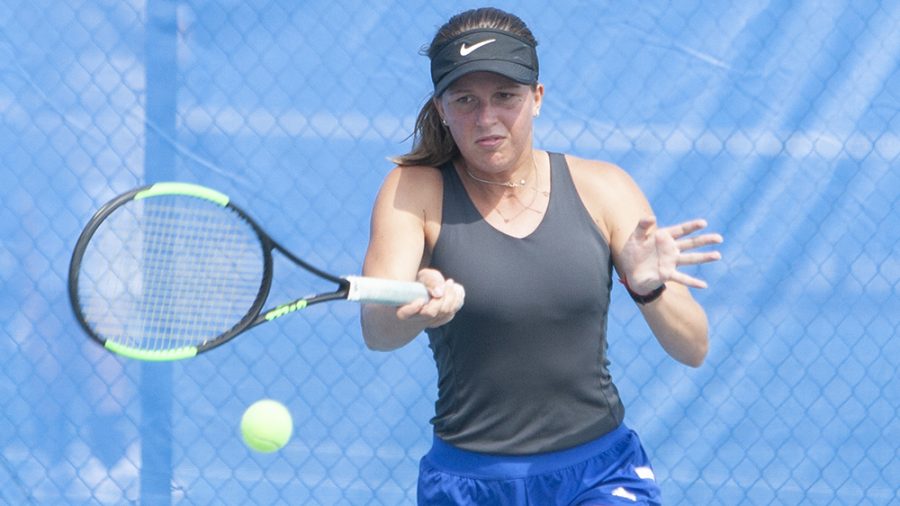 Eastern's Elizaveta Bukraba-Ulanova swings to return a shot in a match at the Darling Courts in her freshman season in 2019. Ulanova and the women's tennis team got their fall season underway over the weekend.

Both the Eastern men’s and women’s tennis teams got their seasons underway over the weekend, competing in the fall for the first time since 2019.

Both teams are playing under new head coaches to begin the season, Ross Sons for the women’s team and Paul Jarzynka for the men’s team.

The men’s team competed in the River Forest Collegiate Invitational in River Forest, Illinois, competing against players from seven other programs.

In singles, redshirt junior Christos Kyrillou participated in the No. 1 draw. He won a match against Northern Illinois’ Kris Ortega in the seventh-place match. He won the first set 6-3 and was up 1-0 in the next when Ortega retired from the match.

Riera was also part of the most successful doubles team for Eastern, along with freshman Tyler Carlin. Playing at No. 2 doubles, Riera and Carlin lost their first match to Xavier before beating UIC 6-4 and then winning 6-1 against Youngstown State in the fifth-place match.

The No. 3 doubles pairing for Eastern also reached the fifth-place match, but lost to Saint Louis.

The men’s team will be back in action on Oct. 1 and 2 when they host the EIU Panther Hidden Dual at the Darling Courts.

The women’s team also remained in-state to open the season, competing in the SIUE Cougar Fall Invite in Edwardsville.

Playing against SIUE, Bradley and Western Illinois, the Panthers went 1-2, losing to the first two teams before beating the Leathernecks.

Returning for the Panthers was senior Rachel Papavasilopoulos, one of the top players in school history.

Coming off a season in which she was named first team All-OVC, Papavasilopoulos won her match at No. 1 singles against Bradley 3-6, 6-4, 10-3.

Papavasilopoulos was 11-2 in No. 1 singles play last season.

She was also part of the No. 1 doubles pairing that won a match against SIUE. Sophomore Christine Gouws was paired with Papavasilopoulos, and the team won 7-5.

A loss at No. 2 doubles against the Cougars meant Eastern failed to get the doubles point in the match. The pairing of Addison Brown and Elizaveta Bukraba-Ulanova, who was named second team All-OVC last season, fell 7-6.

The women’s team will play in just one more tournament for the fall season. They will be in Champaign for the ITA Midwest Regional Sept. 24 through Sept. 26.