Volleyball team improves to 7-1 on season 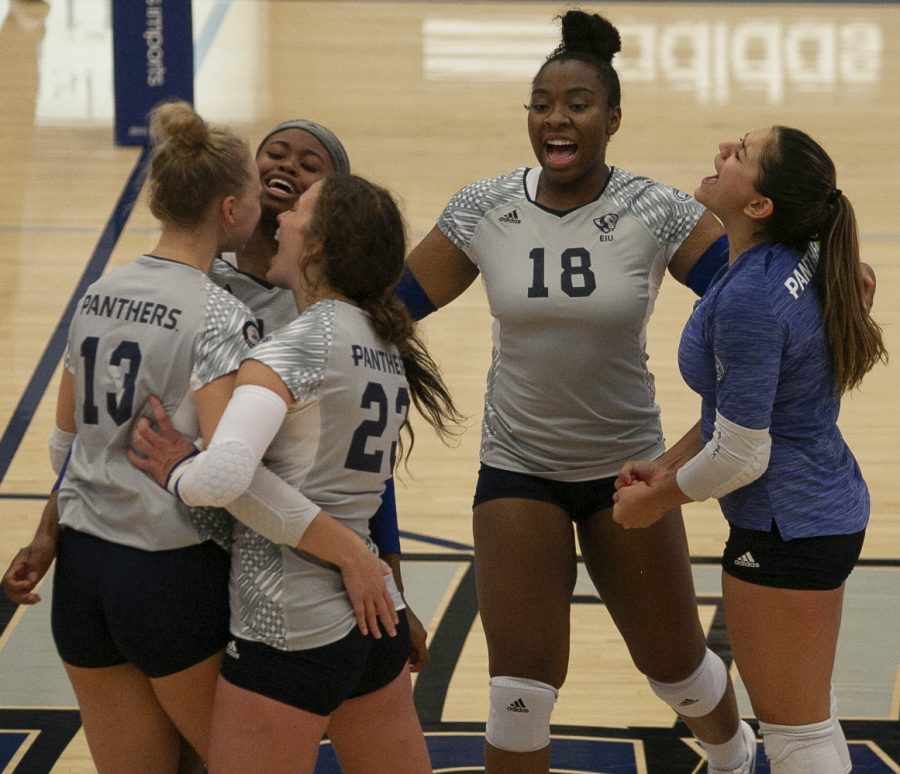 The Eastern volleyball team celebrates a kill from sophomore outside hitter Ella Collins (13) in a match against Northern Illinois Sept. 2 in Lantz Arena. Collins had 4 kills in the match, which Eastern won 3-1.

The hot start to the season for the Eastern volleyball team continued over the weekend.

The Panthers went 3-0 in the Southern Illinois Saluki Tournament, winning their second tournament of the season and improving their record to 7-1.

After winning 3-2 against host Southern Illinois, 3-1 against Alabama State and 30- against USC Upstate, Eastern head coach Sara Thomas said she told the team that she was proud of how they have continued to play to open the season.

“I told them that their continued work in practice and being a collective team, and playing as a team very selflessly, is paying off,” she said. “Them putting the team before themselves is big for any player, but I was really proud of them that we went into that tournament, you never know how it can go, and they stayed focused, they stayed together and they got it done.”

Eastern dropped the first two sets in the opening match Friday morning against Southern Illinois, but then dominated the third set 25-11. They won the fourth set 25-22 and the fifth 15-7 to put away the Salukis.

They recorded 33 kills and just 8 attack errors in the final three sets.

Danielle Allen led the team with 22 kills, a new season high, and added 11 digs to pick up her first double-double of the season. Her hitting percentage was .487 in the match.

Allen also had 22 kills in the win against Alabama State Friday afternoon. The first two sets were close, with Eastern winning the first one 27-25 and dropping the second 26-24.

The Panthers had a big third set for the second-straight match, blowing out the Hornets 25-9 and then closing the match out with a 25-21 win in set four.

This time Eastern was led in kills by Ella Collins with 16, a new career high for the sophomore outside hitter. She also had 10 digs to pick up the double-double.

As a team, Eastern hit a combined .284 in the three matches in Carbondale while holding their opponents to a .193 hitting percentage. Eastern’s efficient attack in the tournament moved them into third in the OVC with a hitting percentage of .217 on the season.

The Panthers won in a variety of ways over the weekend, coming from behind in one match, pulling away after a close start in another and then executing a clean sweep in the third.

Thomas said that winning different kinds of matches can be beneficial going forward in the season.

“It’s all different forms of learning how to win, and that has been key,” she said. “No matter what the situation the situation we’re in, we are able to stay disciplined and finish it out and to never give up.”

She also said that volleyball is a sport that gives teams plenty of chances to win, even after going through tough stretches in a match.

“What’s beautiful in the game of volleyball is you have to win three sets of the five, and the game always starts over,” Thomas said. “Even if you may not have played really great in one set, you have an opportunity to come back in the next set.”

Eastern has just two more matches before conference play begins Sept. 24. They will play Indiana State on the road Sept. 17 and then host the Sycamores two days later in Lantz Arena.