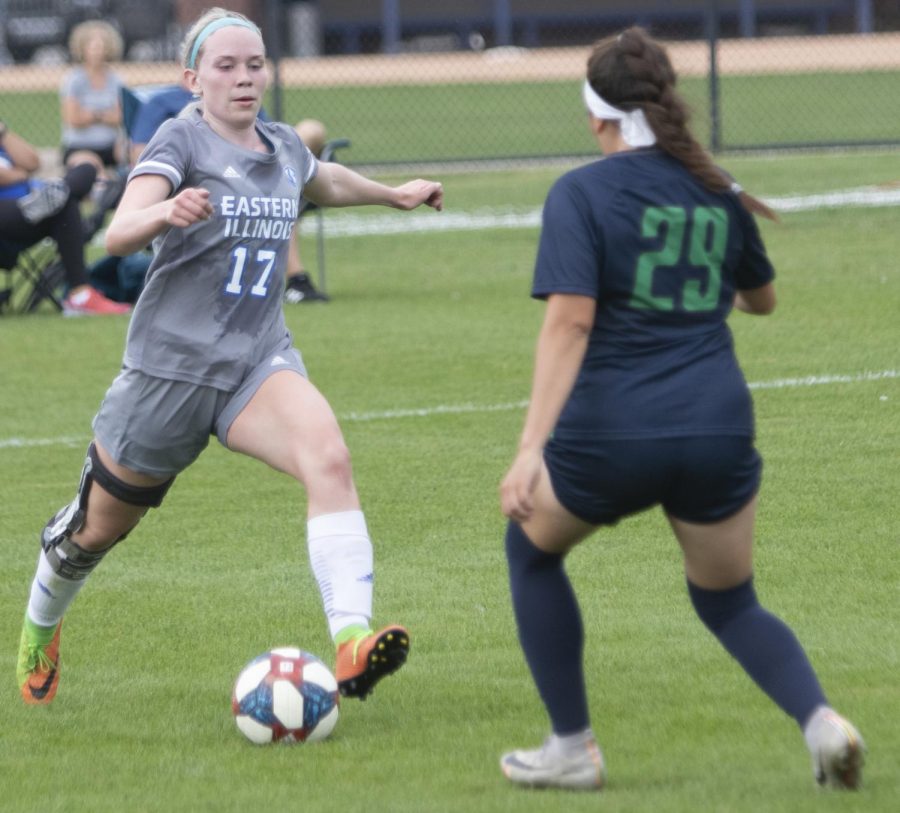 The Panthers narrowly lost to Central Michigan on Sunday with a 1-0 score. Central Michigan got on the board early with a goal from Gaelle Wells that stood unmatched for the rest of the contest.

However, while neither team scored after the early opener, both teams traded impressive offensive possessions back and forth.

Before the goal, Eastern opened up play with a solid possession that quickly brought on pressure to the Central Michigan back line. The Chippewas responded, though, with the quick goal to grab the lead.

In the first half, both teams’ offenses put on a flurry of shots, with Central Michigan having six shots compared to Eastern’s five.

Central Michigan was able to put more shots on goal than the Panthers, with three of their first half shots on target compared to Eastern’s lone shot on goal by midfielder Jenna Little.

The second half was a scoreless back and forth of solid offensive possessions, but possessions themselves became a little more one-sided, with Central Michigan having seven shots in the second half and Eastern only having three.

Eastern did have some moments where it looked as if they would even the score, However, the Chippewas held on, and their one goal lead stood the rest of the match.

While Eastern’s offense looked promising, with a host of passes that found players in space and set up solid opportunities, Faith Davies also played a major role in the Panthers remaining competitive. Davies recording a whopping eight saves, with seven of those coming in the second half.

On multiple occasions, Davies had to use all of her height and wingspan to keep the ball from finding the back of the net, and even recorded an impressive acrobatic save that saw her leap to her right to prevent a very nice shot on target.

She also showed an impressive defensive IQ by attacking passes from the corner before they could reach their target or coming out of the box to defend a potential play from getting behind the defense.

Speaking of, Eastern’s defense did a solid job in limiting certain opportunities.

Many players made key interventions to stop a pass from potentially sneaking behind or knocking a ball away in the air to prevent the immediate threat.

Eastern, while taking the loss, looked very competitive in their match on Sunday.

There were many bright spots that can be taken from this match. With conference play not far away, this match may give the Panthers valuable positives and negatives to work with in the future.

Eastern has one more non-conference match against DePaul on Saturday, Sept. 18, before starting the first of their eight regular-season conference matches.