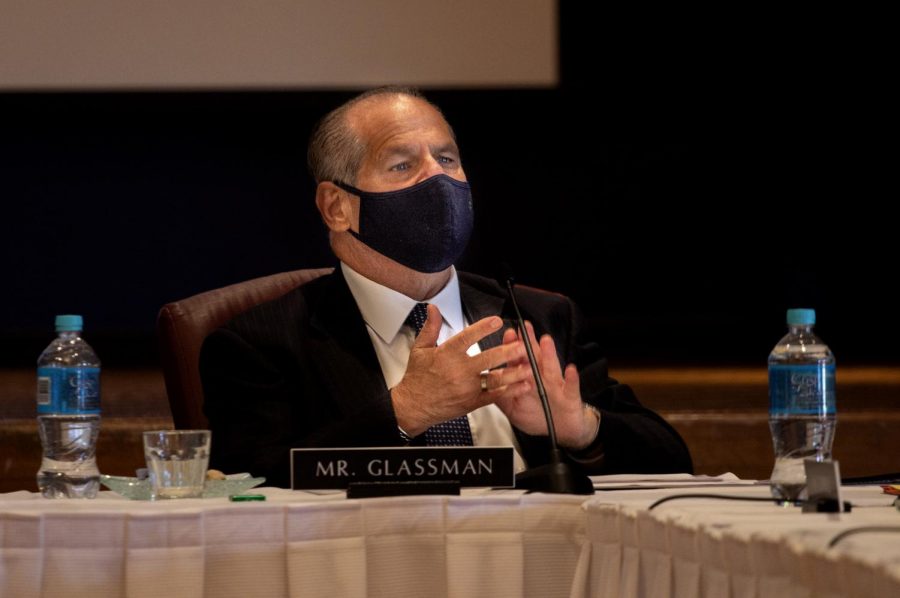 Eastern Illinois University President Davis Glassman speaks during the Sept. 10, 2021 Board of Trustees meeting held at the Grand Ballroom at the Martin Luther King Jr. University Union. He announced his intention to reconvene the Naming Comittee during the meeting on Sept. 10.

University President David Glassman updated the Board of Trustees on the potential renaming of Douglas Hall Sept. 10.

Glassman discussed the matter in the morning sessions with the Board, then later during the President’s report to the Board.

The trustees were informed that the Naming Committee recommended a name change for the hall.

Glassman said that the next step in the process is to “go out and see what possible names might be available that would be fitting and suiting if we were to rename the building of Douglas Hall.”

He explained how he will be getting that information.

“So very soon after this meeting, I’ll be going out to the campus community and beyond, and looking for potential names that people, again, would like to proffer that would have historical meaning or substantive meaning to our institution,” Glassman said.

Once he has a list of potential names, he will be providing the list to the University Naming Committee for vetting.

The committee will then send a list or a singular name back as a recommendation.

“At that point, we will review it with the President’s Council, and determine whether we will have a formal recommendation to the Board of Trustees,” Glassman said. “That would include both a recommendation, if it goes this direction, to rename Douglas Hall, and to name it the name we have suggested for them.”

Glassman said he is not expecting the process to take a long period of time.

“We don’t believe that it’s going to take a long period of time to have people’s solicit or provide potential names, we’ll review it relatively quickly, and then move the process forward,” Glassman said.

Following the meeting, representatives of The Daily Eastern News spoke to trustees to ask for their opinions on the rename.

BOT Chair Joyce Madigan said she was waiting on more information before making a decision.

BOT Vice Chair P.J. Thompson said he had no comment on the matter.

BOT Secretary Audrey Edwards said she was in favor of a name change and personally favored naming the building after Fredrick Douglass.

BOT Member Pro Tem Barb Baurer said she was in favor of a name change.

Trustee Joe Dively said he was waiting to see what Glassman recommends.

Trustee Christopher Hicks said he supports Glassman in the matter and he personally is in favor of a name change.

Trustee Martin Ruhaak said he is waiting for more information on the matter.

Student Trustee Payton Ade said he is in favor of the name change and that the student body’s support is there for a name change. He added he is looking forward to hearing the Naming Committee’s stance.

Respondents left explanations of their position with their votes.

“I would encourage the university to retain, at least in some form, the pairing of Lincoln and Douglas in the naming of the respective halls. (Although this questionnaire specifically asks about keeping or changing the name of Douglas Hall, I would advocate for the 2017 proposal of renaming Lincoln and Douglas Halls as Lincoln/Douglas Debate Hall East and West.) These debates are an important contribution of our city and state to the broader life and history of the United States, and hundreds of high school students still compete in Lincoln/Douglas Debates through the National Speech and Debate Association. I think it’s valuable to have some reminder of those lengthy public debates on campus,” an individual in favor of retaining the name of Douglas Hall said. “Moreover, I think explicitly naming the buildings for the debates rather than the two men could address concerns both about Douglas’s policies and positions but also Lincoln’s racist rhetoric and positions.”

“The name of a building denotes a certain type of honor. We remember Stephen Douglas for his own brand of racist repugnance when we study the Lincoln Douglas debates. It is a brand not worthy of a place of pride, but of one that demands we do better now with the assistance of the lessons of history. EIU has a remarkable student body that any university could be proud. The students deserve a campus that reflects its significance in the tides of history that brought us closer to a more just world. They do not need to be reminded of a “both sides-ism” that is often deployed only to service prevailing white supremacist views that continue to haunt our progress today. Furthermore, how many buildings on campus pay homage to the Black student body/alumni that have given so much to the university or the pantheons of Black Americans that have given their lives in service to our country? It’s long overdue to change the name of the residence hall,” an individual in favor of renaming Douglas Hall said. “Please don’t miss this opportunity to do the right thing, the good thing.”

According to the internal governing policy regarding the naming of university facilities:

The President shall make recommendations to the Board regarding the naming of property for individuals.

Renaming Douglas Hall has been discussed three times in the last decade.

Douglas Hall is named after Stephen Douglas, a pro-slavery figure in history who debated with Abraham Lincoln in 1858 at Charleston’s fairgrounds.

The hall was named in tandem with Lincoln Hall to honor the debates that took place.